Gamma-ray bursts (GRBs) are most powerful explosions observed in the universe and their sources may lie at distances reaching redshift z = 9.4. It takes an incredible 13.1 billion years for the light from such an object to get to the Earth.

Originally it was found that there exist two groups of GRBs: the lengthy ones (with durations longer than about 2 s), and the short ones. The long GRBs are probably created when a massive Wolf-Rayet star collapses at the end if its lifetime. In case of short GRBs their origin is less well understood, however astronomers do have a model explaining them as the violent mergers of two compact objects such as neutron stars. Some works (see [1] and [2]) classifying GRBs based on statistical analysis of the observed gamma radiation and using data from the BATSE and Swift instruments conclude that two groups may not be enough. 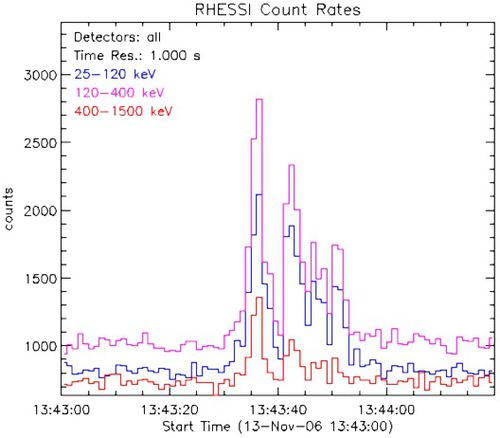 The RHESSI satellite was designed to study hard X-rays and gamma-rays from solar flares. However its germanium spectrometers are only lightly shielded, thus making this instrument also very useful to study radiation from gamma-ray bursts coming to the detectors from any direction. An earlier Nugget reported a RHESSI observation of a magnetar, for example. Figure 1 shows an example of a GRB observation. With a field of view of about half of the sky, RHESSI observes about one or two bursts per week (see the RHESSI GRB catalog).

The RHESSI GRB database, which contains 427 events from February 2002 to April 2008, was studied statistically in order to give more information on the classification scheme of GRB groups. The bursts' durations, spectral hardnesses, peak count rates and spectral lags were analysed by several methods (for details, see references [3] and [4]). 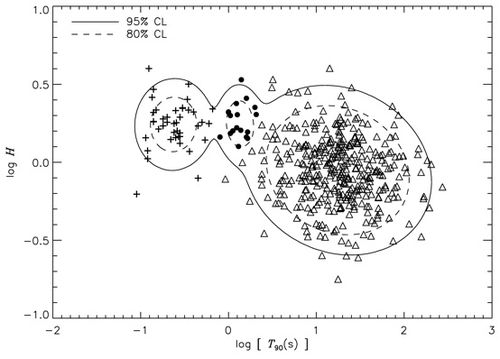 Figure 2: Hardness ratio H plotted against the duration T90 for the RHESSI GRBs with the best maximum-likelihood fit of three bivariate lognormal functions. Solid and dashed curves delimit the confidence levels of the fit. The different GRB group members are denoted with different symbols.

Spectral lags and peak-counts were calculated for each event, if the signal-to-noise was high enough, and then the three groups were mutually compared. The spectral lag tells how much is the low-energy emission delayed in comparison to the high-energy one. It is calculated from the peak of the cross-correlation function of two light curves derived at two different energy ranges. A statistical test applied to the lags of the shortduration and long-duration pair of groups strongly supports the well-known claim that these two groups are different phenomena and confirms the older results obtained with the BATSE instrument. Surprisingly it was found that the distributions of the peak-count rates are different over all three groups. Cumulative distributions of peak-count rates for different GRB groups are shown on Figure 3. 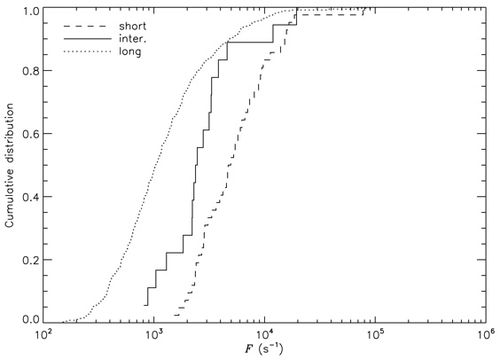 RHESSI is capable of observing gamma-ray bursts coming from the deep universe and it has already collected more than four hundred such events. We constructed a new observational database for this satellite containing GRB durations, hardnesses, peak-count rates and spectral lags. According to the observations it follows that GRBs can be separated into short and long classes, and that the short GRBs are on average harder than the long ones. Furthermore the maximum-likielihood method reveals that a better description of the data is a three-component fit representing three GRB classes. The analysis of peak-count rates and spectral lags show that there are some differences in the properties of the gamma-ray flux among these GRB classes.

[3] Search for Gamma-Ray Burst Classes with the RHESSI Satellite

Jakub Ripa is currently a Postdoctoral researcher at the Institute for the Early Universe and at the Research Center of MEMS Space Telescope of Ewha Woman's University, Seoul, Korea.