RHESSI's germanium detectors periodically require maintenance in the form of annealing. This just involves warming the detectors up so that their natural damage due to high-energy particles essentially fades away. The procedure is time-consuming and somewhat difficult, not to mention adventuresome, but the RHESSI team had planned to do its second anneal operation just about now in preparation for the major flares now beginning to happen as a part of Solar Cycle 24.

By an amazing coincidence, just as our planning cycle for the anneal operation was beginning, a totally unexpected glitch actually turned RHESSI off completely, including the cryocooler itself - an operational no-no, but of course the first step in an anneal operation since the detectors need to be heated, not cooled. RHESSI's cryocooler is a simplified and ruggedized version of a thermodynamic Stirling engine and has the task of cooling the detectors - at the cost of some tens of watts of power - to below 100 K. The fact that this was totally unplanned made the operations a bit of an adventure, but the results seem to have been very satisfactory. This Nugget is just to keep RHESSI fans up to date on its status. This extends the information already available in the RHESSI report on the "anomaly", as provided to NASA.

First, some background information. Energetic protons and neutrons encountered in Earth orbit penetrate RHESSI's germanium detectors and create small disordered regions in the germanium crystal lattice. When a solar X-ray or gamma ray interacts in a detector, it liberates a cloud of electron/hole pairs in the semiconductor that are swept to the detector's electrodes by the applied electric field, producing the current signal we detect with our electronics. But the disordered regions tend to become negatively charged and are effective hole traps. By removing some of the charge moving through the crystal, they degrade the response of the detector; a monochromatic gamma-ray source, instead of looking like a nice, narrow Gaussian line in the spectrum, will grow a tail on the low-energy side that gets more and more severe as radiation damage increases. In about a minute, the trap will release the hole (too late to count, of course) and be ready to do further mischief. At the most extreme levels of radiation damage, the space density of negative charges from unfilled traps is so great that the resulting field can cancel the externally applied field, leaving parts of the detector volume with no field or a field pointing in the wrong direction. At this point, the detector has dead (passive) portions, most notably around the outside of the rear detector segments.

For reasons that are not fully understood, heating the detectors to approximately 100 C will remove the tendency for most of the disordered regions to become negatively charged and function as hole traps. This temperature is not nearly high enough to re-crystallize the lattice, but this process is still referred to as "annealing". RHESSI's detectors were first annealed in November 2007, and the adventure reported here is the second time. Figure 1 shows the spectrum of background in a typical front and rear segment. Note the improvement both in the ability to resolve narrow background lines and in the total count rate (related to the active detector volume).

On March 17 something happened on board RHESSI. We still do not know the exact details, but the leading idea is an unexpected undervoltage appeared on the main spacecraft power bus. This could have tripped an safety circuit that shut all systems down. The cryocoolers would normally continue functioning on battery power, but the safety trip also turned the battery heaters off. They froze, and no power was available during orbit night (this can be very, very cold in space). It did not help matters that this glitch appeared right after a series of Berkeley ground station contact passes, when command control is normally available, so that the problem did not show up for half a day.

However there was spacecraft power during the sunlit portions of the orbit, so eventually there was no problem about getting things sorted out. But in a case such as this, one is flying blind - the spacecraft is in an unplanned configuration, and so one must be very careful in recovering it. Considerable discussion of almost-forgotten spacecraft engineering ensued as the RHESSI team carefully nursed the spacecraft back into a "nominal" state (note that "anomalous" and "nominal" are NASA jargon basically meaning "bad" and "good" respectively). Everything recovered well enough so that the anneal could begin, and the silver lining of this story is that the RHESSI team thus did not have to spend a lot of time planning this delicate operation: it was forced on us. The "trips" have now been disabled, so that this cannot happen again, and the RHESSI team is working on replacing the positive features of this capability.

The adventure here illustrates how tricky the operation of a delicate, remote spacecraft can be. For example, RHESSI pointing changed subtly as a result of the glitch. Such a change might be associated with something mechanical, such as a micrometeorite impact on one of the solar panels. Instead we think that it is just the re-initialization of the sequences of commands to the magnetic torquers that allow RHESSI to follow the apparent motion of the Sun; these commands need to follow the spinning motion of the spacecraft and its geographical position, and are generated by software on board. 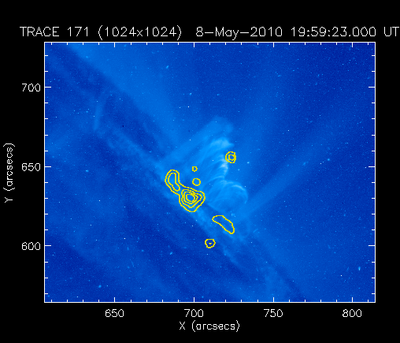 The real test of the success of the annealing operation (and the recovery from the glitch) is of course lies in the creation of images and spectra of real flares. The Sun has cooperated by having a few, even though full solar activity has not yet returned. The anneal (see Figure 1) clearly improved the spectral resolution of the detectors. Routine recalibration of the detector gains (pulse height vs. photon energy) has now also been accomplished, using the sharp background lines visible in that Figure. The bottom line is that RHESSI hard X-ray imaging works well again on an actual flare, as illustrated in Figure 2. Likewise we can make images with excellent spectral resolution again, as illustrated in Figure 3. This spectrum shows the Fe feature at 6.7 keV, a good diagnostic of the thermal plasma; there is also a hard X-ray tail that measures the non-thermal electron content of the event. The spectrum (Figure 3) and the image (Figure 2) are from different small flares. 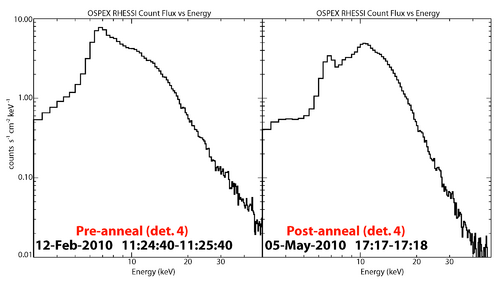 Figure 3: Spectral fits for two small flares, one before and one after the successful anneal operation (courtesy Amir Caspi). Note the presence of the Fe line feature at 6.7 keV, confirming the high spectral resolution now being achieved again.

RHESSI has brilliantly survived its second anneal, even though it occurred somewhat anomalously. The best results will come from the flare observations to be obtained soon, but we know enough already to be very pleased indeed.

has returned to pre-damage levels.

Overall, RHESSI looks far healthier now than before our involuntary second anneal, and even better than just after the first (planned) one. We look forward now to stalwart service by RHESSI, the only instrument capable of imaging the fundamentally important hard X-ray and γ-ray emissions of solar flares. With the new Solar Dynamics Observatory successfully in orbit, in fact, RHESSI now has a comprehensive "context" observatory that should make every observation count.