Stellar flares can resemble solar flares, and indeed there are many X-ray observations. Unfortunately the hard X-ray spectrum (RHESSI's specialty) is typically too faint to detect. Nevertheless the solar and stellar cases may have many points of similarity, and so the physics may be common. In this Nugget we report something that might be different - the common occurrence of "superflares" on remote solar-type stars as detected by the Kepler observatory in space.

"Superflares" can be 10-10,000 times more energetic than the typical major solar flares, say at GOES class X10. Most superflares have been observed on rapidly rotating stars such as young stellar objects or close binary systems, and only nine superflares on solar-type stars (G-type main sequence stars) had been reported prior to Kepler. But now...

The Kepler space telescope measured the brightness of some 90,000 solar-type stars every 30 minutes for 4 years (from April 2009 to May 2013). Among these 90,000 stars, about 1,500 were observed every 1 minute. The typical photometric precision of the Kepler data is of the order of 0.01%, which is comparable to the change in the total solar irradiance ("solar constant") due to an X10 class solar flare. We have searched systematically for flares on these Kepler solar-type stars, finding 1547 superflares on 279 different objects at 30-min timing, and 189 superflares on 23 objects with the 1-minute sampling.

Figure 1 shows some lightcurves of Kepler superflares. The bolometric energy released by a superflare can be in the range 1033-36 erg, so they are far more powerful than the the largest solar flares (about 1032 erg). 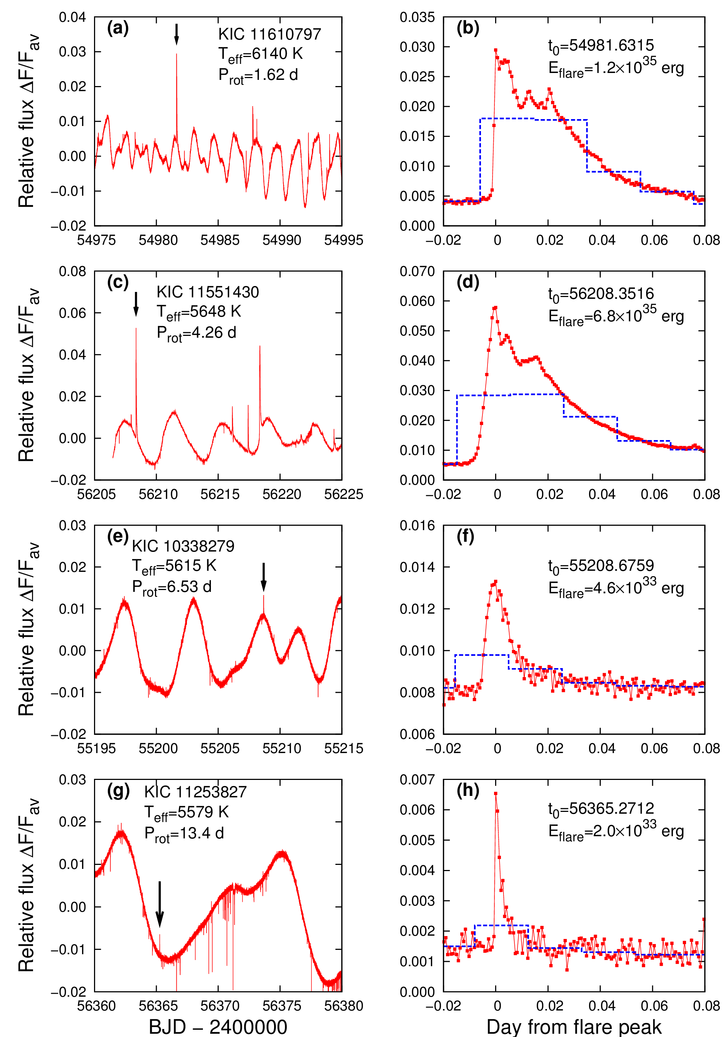 Figure 1: Kepler superflares observed at 1-minute cadence. Each star has a [http://tdc-www.harvard.edu/software/catalogs/kic.html KIC} ("Kepler Input Catalog"] identifier Left column: the slow variations showing spottedness, with peaks corresponding to flares; right column, some of the flares on the expanded time scale made possible by the 1-min data. Note the presence of quasi-periodic oscillations as often seen in solar flares. For details see Ref. [1].

Most of these stars show quasi-periodic brightness variations with periods of 1-30 days, as can be seen in Figure 1. We interpret these variations as due to the presence of large spots moving across the visible face of the star as it rotates; thence we can infer the rotation period of the superflaring star.

Solar flares, like earthquakes, occur in an extended power-law distribution. We have found that these Kepler superflares do the same thing and roughly extend this power law to the highest energy (Figure 2). 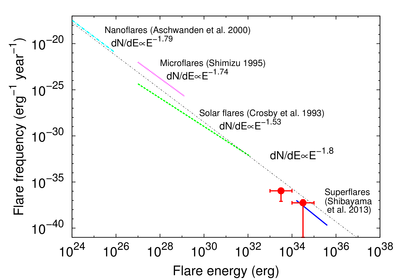 Figure 2: Occurrence frequency distributions for solar flares and Kepler superflares, showing both to be consistent with the same power law (see Ref. [2] for details).

Solar flares derive their energy from the coronal magnetic field, and we assume that stellar flares work the same way. Thus the energy release must be smaller than the magnetic energy stored near sunspots or starspots. For the latter, we get an estimate of this from the amplitude of the rotational modulation ("gyrochronology"; the slow variations seen in Figure 1). Figure 3 shows the resulting correlation between the flare energy and spot area, with solar flares towards the bottom and the superlares towards the top. The diagonal lines show the assumption that 10 percent of magnetic energy is released by a flare, plus assumptions about field strength. There is rough consistency, but note that some of the superflares lie above the heavy line that we regard as most probable. This illustrates a possible dependence on a non-solar factor: the inclination of a random star's rotation axis, and our line of sight. These discrepant superflares may occur on stars with low inclination angles, or stars with polar spots. Follow-up high-dispersion spectroscopy has revealed that indeed some superflare stars above the line do have small inclination angles (Ref. [4]). 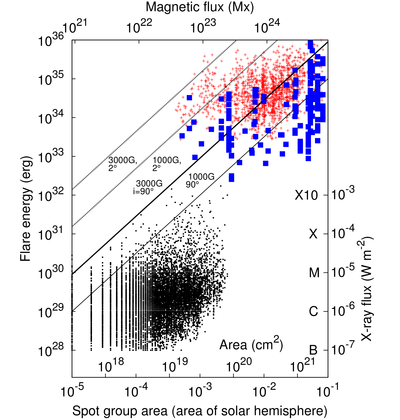 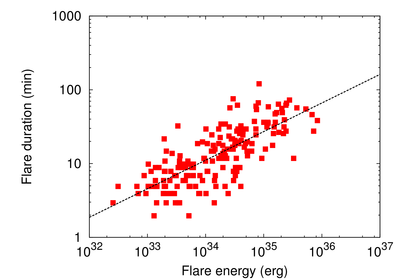 Figure 4: Scatter plot of the flare duration (e-folding decay time) as a function of flare energy. Filled squares indicate superflares on solar-type stars from 1-minute cadence data. Dashed line represents linear regression for the data of superflares. The power-law slope of the line is 0.39 +/- 0.03.

The long-term, high-precision and continuous observations of the large number of solar-type stars with Kepler enable us to detect not only exoplanets, its primary scientific objective, but also to observe flares. In particular we have found many "superflares" on other Sun-like stars. Our analysis of superflares on solar-type stars with the Kepler data reveals that the statistical properties of these stellar flares are similar to those of solar flares. These results suggest that both solar flares and superflares are caused by the same physical process (e.g. magnetic reconnection). Further detailed observations of superflare stars are needed to reveal whether superflare stars are really similar to the Sun and whether our Sun can produce superflares.

[2] "Superflares on Solar-type Stars Observed with Kepler. I. Statistical Properties of Superflares"