A Curious Sunspot Group in 2018

Solar minimum is approaching, and this means something important for NuSTAR and solar high-energy astrophysics. This will be an opportunity to observe, with maximum sensitivity, any hard X-ray component of solar emission. Success at this would be revolutionary from multiple points of view, for example in the microflare/nanoflare scenario for coronal heating.

Why is solar minimum so important for our high-energy observations? One might naively think just the opposite. But E.N. Parker's seminal 1982 paper (Ref. [1]) argued convincingly that episodic heating could explain coronal heating; the episodes would require higher-than-average temperatures to be present at all times, and their detection could constitute a breakthrough in the long-imagined mystery of coronal heating. By analogy with the relatively well-understood physics of solar flares, These "nanoflares" would also produce non-thermal signatures such as hard X-rays - hence the NuSTAR interest. On the other hand, the relatively steady heating of even quiescent active regions - which itself could consist of tiny episodic events - is a major source of background nuisance for RHESSI and now NuSTAR observations of the diffuse corona itself.

For this reason the RHESSI team watches the Sun closely, and early in 2018 (last week, in fact) a most unusual sunspot group appeared. From the high-energy point of view, this region was irrelevant except as a potential nuisance via its X-ray brightness, but its mere existence was striking.

A most curious sunspot group

The interesting sunspots appeared on January 9 and persisted for about three days. On January 10 NOAA recognized this group and gave it an active region number, NOAA 12694; this made it the 440th active region to have appeared in Solar Cycle 24. We do not expect too many more sunspot groups over then next year or so, because of drawing near the end of this Cycle.

The active region appeared at the wrong latitude! Figure 1 shows its location on the butterfly diagram. Note as well the very strong N-S asymmetry for the last two years of Cycle 24 spots; the S wing of the butterfly is deficient. 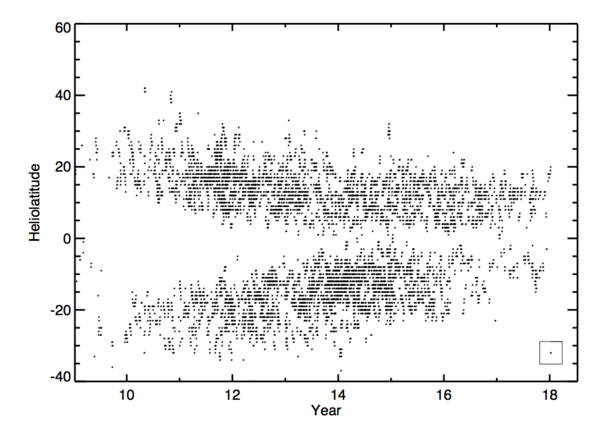 Figure 1: Latitudes of sunspot groups in Cycle 23, beginning in 2009 and ending in early January 2018. The anomalous AR12694 is at lower right, marked by the square box.

Other than its extremely odd latitude, nothing unusual about this group strikes the eye. Its latitude would not have been odd prior to 2015, but at present the butterfly's wings are almost closed. I have not tried to assign a formal probability to this occurrence, based on Cycle 24 identification, but think that it is most curious.

Figure 2 shows the appearance of the region and of the spots. The first emerging flux appeared on January 7, and the spots became visible on January 8. I counted three in the inset at lower right. Finally on January 9, NOAA assigned a region number and assessed this region as alpha-type, McIntosh class Axx, and area a minimal 10 millionths. They only listed one spot, whereas you and I can see three in the AIA image (inset at lower right in Figure 2.

The magnetic polarity (white preceding) matches that expected for Cycle 24. But does its latitude mean that this is the first spot group of Cycle 25, but with a reversed polarity? Leif Svalgaard points out that new-cycle regions have already begun to appear. This is part of the thrill of solar minimum. 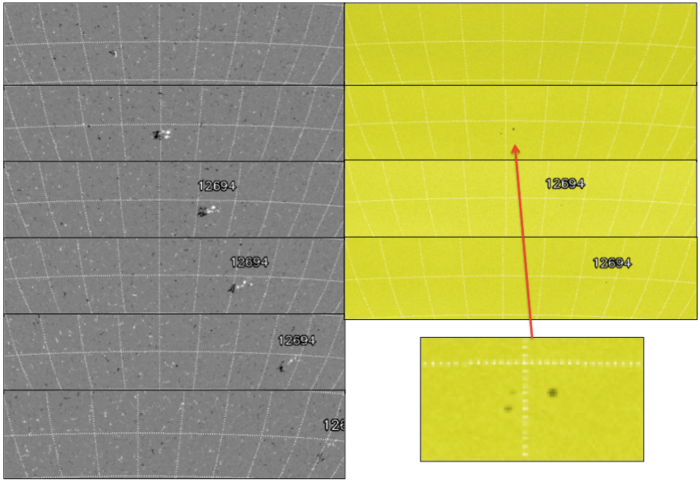 Figure 1: The appearance of NOAA12694, derived from the material presented on the very convenient SolarMonitor pages. Left, magnetic maps from HMI for January 7-12, with AIA images on the right for the first four days.

This Nugget has no real conclusions, except to note that solar magnetism never ceases to amaze. From the RHESSI/NuSTAR point of view, this just means that we must be alert, since this rapidly appearing tiny spot dominated the X-ray sun (briefly) and could not have been anticipated in any way. See the STCE News article for more information here.

[1] "Nanoflares and the solar X-ray corona"