Solar flares are among the most energetic phenomena that take place in the solar atmosphere. The enhanced emissions display sudden and rapid increases over the whole electromagnetic spectrum, from decameter radio waves to high-energy gamma rays, as reported in many previous Nuggets. We commonly classify flares as "eruptive" or "confined." An eruptive flare will notably have well-defined brightenings in two nearly parallel "ribbons" in the chromosphere, and this characteristic is often used to predict that a coronal mass ejection and geomagnetic storm will occur.

The unsuccessful eruption of a flux rope

This Nugget describes observations of SOL2015-01-13T04:24, a major flare having including two emission peaks at GOES levels M5.6 and M4.9. Movies from SDO/AIA show that this flare actually coincided with a failed solar eruption instead of a successful one (Figure 1). The AIA instrument makes images that reflect different plasma temperatures. The progenitor of the failed eruption may be a helical magnetic flux rope that preferentially appears in the high-temperature passbands of AIA. For the present flare, the associated flux rope appears to rise at 04:10 UT, bu then it retracts again after apparently colliding or interacting with a different magnetic system assumed to lie above it. 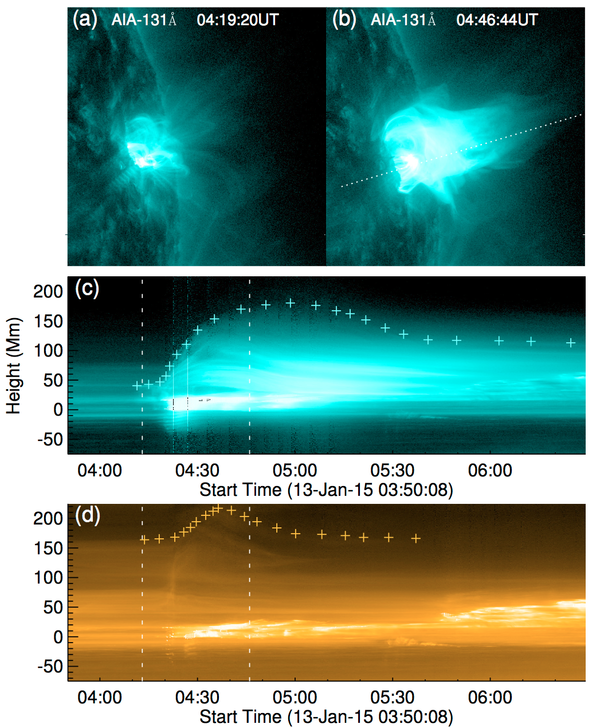 Figure 1: (a) and (b) The AIA images showing the failed MFR eruption. The oblique dashed line denotes a slice that is along the direction of the erupting flux rope. (c) and (d) Time-slice plots of images in two AIA passbands. The cyan and yellow pluses denote the height-time measurement of the flux rope and the overlying field, respectively. The two vertical dashed lines denote the onsets of two episodes of the flare, as described in the text.

White-light emission from the flare ribbons

Although the flux rope did not succeed in its eruption, two elongated ribbon-like flare brightenings did appear. We could detect these (Ref. [1]) even in the white-light continuum, although the classical signature of flare ribbons is in chromospheric signatures. The visible ("white light") continuum is well observed by our ONSET (Optical and Near-infrared Solar Eruption Tracer; Ref. [2]) instrument at a new solar observing site near [https://en.wikipedia.org/wiki/Fuxian_Lake Fuxian Lake in Yunnan Province, southwest China.

At about 04:20 UT these observations revealed, two white-light kernels. With the flare development, the left kernel extended toward the north, while the right one extended toward the southwest. By 04:22 UT, these brightenings formed two well-shaped ribbon-like structures (Figure 2). 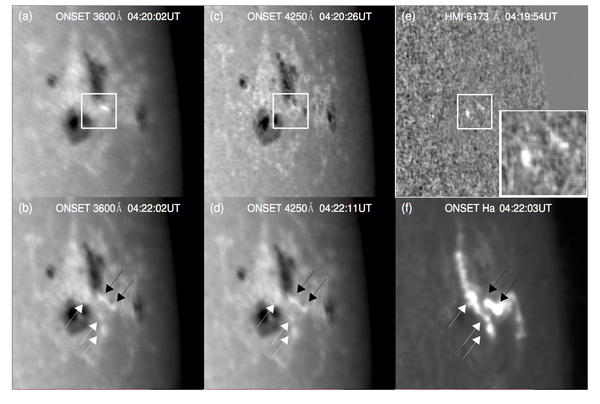 We also found the white-light enhancements at the passbands 360 nm (ONSET) and 617.3 nm (HMI) to coincide well with the variation of the Fermi hard X-ray flux at 26-50 keV; see Figure 3.

Spectroscopic observations of the flare ribbons

The IRIS (Interface Region Imaging Spectrograph) data show that the continuum enhancement at one white-light kernel appears across the whole ultraviolet passband. These data also show many interesting spectroscopic features: (1), the average profiles of the Si IV, C II, and Mg II h/k lines display extremely large peak enhancements and significant non-thermal broadening; (2) lines such of H II Cl I, and Fe II, normally weak and or even invisible in non-flaring regions, get obviously enhanced when the the continuum appears; (3), some absorption lines near the far wing of Mg II h/k, which are possibly formed in the lower chromosphere and photosphere, appear in emission; and (4) the Doppler pattern of the Si IV, C II, and Mg II h/k lines at the strongly emission pixels are blueshifted, whereas they are redshifted at the moderately bright pixels. See Ref. [3] for a discussion of the rich UV spectroscopy from IRIS.

A two-ribbon flare is usually believed only to be associated with a successful eruption of a flux rope or a CME. Nevertheless, this event shows that even a failed eruption can produce a two-ribbon flare. The two ribbons even appear at the white-light 360 nm passband. White-light flares have two categories, type I and type II, which we do not describe in this Nugget. The synchronous variation of the continuum emission and Fermi 26-50 keV hard X-ray flux, and the development of the two white-light isolated kernels into two elongated ribbons, indicate that this flare belongs to the type I category, for which the increase of the white-light emission is associated with high-energy electrons that can emit bremsstrahlung hard X-rays. In the standard picture, these electrons are accelerated in a process related to magnetic reconnection in the corona. The precipitation of these electrons would sequentially heat the chromosphere and even below along the direction of the PIL, finally forming two well-developed flare ribbons, as well as the ultraviolet line and continuum enhancements and the flows detected, presumably, at the location of the precipitation. Unfortunately RHESSI hard X-ray imaging observations were not available for this flare during these developments.

This flare occurred on the anniversary of the famous SOL1992-01-13 event!

[1] "A Two-ribbon White-light Flare Associated with a Failed Solar Eruption Observed by ONSET, SDO, and IRIS"