Solar hard X-rays and gamma-rays were discovered in the middle of the last century via balloon-borne instruments [Ref. 1] deployed by the Minnesota physicists L.E. Peterson and J.R. Winckler; the latter also discovered sprites. By modern naming convention, we'd call their flare SOL1958-03-20T13:05, but it preceded any useful soft X-ray observations and so there is no GOES classification of the event. Peterson & Winckler do report the simultaneous occurrence of a "magnetic crotchet," as also detected in the case of the Carrington flare in 1859. Such a geomagnetic effect clearly indicates the presence of strong solar soft X-ray emission along with the high-energy radiations discovered from the balloon.

In this Nugget we show how a recent Antarctic multi-balloon mission, BARREL has also been able to observe some types of solar activity. Robyn MIllan of Dartmouth College is the lead scientist of this ambitious experiment. As with the original Peterson-Winckler experiment, BARREL wasn't designed to study solar activity, but some of these signals from the Sun come through loud and clear. BARREL's primary mission is to study the loss of electrons to the upper atmosphere from the Earth's Van Allen Belts.

A stream of small balloons, 1 - 8 at any given time, circle the Antarctic continent, following the vortex winds at high altitudes in the polar regions. These payloads are launched from two stations; SANAE IV and Halley 6. Power comes from solar cells, and data is retrieved over the iridium satellite network to an automated real-time webpage, allowing the ground-based scientists to follow along. These multi-point measurements allow us to better determine temporal and spatial structures in the radiation belts. A [http://www.nasa.gov/content/goddard/nasa-funded-science-balloons-launch-in-antarctica/#.UwJH_yj5Q-Y video describing the BARREL Mission along with a NASA blurb] goes into more detail than we do here in this nugget. A picture of one of the BARREL launches can be seen in Figure 1, taken from the South African Antarctic station SANAE shortly after launch. 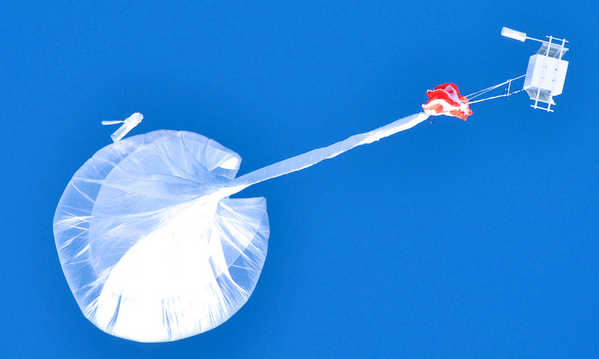 Fig. 1: A BARREL balloon shortly after launch (view from below). One can see the balloon billowing out, still far from inflated since it is just after launch; the orange parachute, furled, and the payload itself. The payload itself weighs only about 20 kg, and is whisked up to 30-35 km, into the stratosphere within a couple of hours. The balloon can maintain this altitude for the time it takes to circumnavigate the globe, albeit at very high latitude.

The instrumentation on each BARREL payload consists of a simple isotropically sensitive sodium iodide scintillation counter. This responds well to the gamma-rays and hard X-rays resulting from bremsstrahlung as the expected relativistic electrons undergo atomic collisions in the upper atmosphere. The time variations reveal the presence of interesting phenomena, and the detector records their spectra over a wide energy range. The solar gamma-rays and hard X-rays result from similar physics, but with the collisions taking place in the solar atmosphere instead of the Earth's.

The BARREL detectors respond to many things. The full list would include many sources of cosmic X-rays, the Sun as we discuss in this nugget, the Van Allen Belts by design, and radiation from the Earth's atmosphere. For each of these components, the others would often be termed "background radiation". When studying one of these events, the others reduce the quality of the observation. However, these other events can sometimes help with the calibration of the data of interest. for instance, the annihilation line in the atmosphere is used to help calibrate the energy of the events BARREL observes and Gamma Ray Bursts have been found to be useful in making sure the timing of events is correct between payloads. Some times these other sources are useful and sometimes not, but that is how science usually works!

Figure 2 shows the BARREL responses to the active region on the Sun which included an M-Class flare SOL2014-02-07T10:29 as well as radio bursts. Note that BARREL payload "2O" missed out, (the lower left panels). It was at a lower altitude which may have resulted in severe extinction of the incident solar radiation, especially since the Sun is low on the horizon even at high noon at such latitudes late in the southern hemispheric summer. 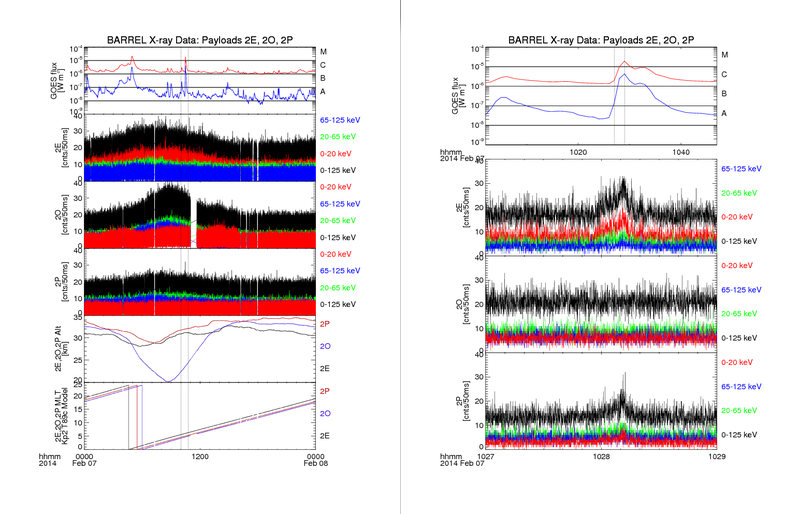 Fig. 2: The panels on the left show, top to bottom, the GOES soft X-ray fluxes (flares); three sets of counting rates from different BARREL balloons flying on 7 February; and their heights and local times (longitudes). On the right is a zoomed in version of the top four panels from the figure on the left. A clear response to the activity from sunspot 1944 can be seen in the GOES data as well as in two of the BARREL payloads.

Both RHESSI and Fermi routinely produce comparable or better data for solar active regions such as these. However, as during the BARREL campaign there are always balloons up, and during the months of December and January are completely sun-lit, the balloons do not go into eclipse. Thus this small balloon mission may be able to help add data to the study of these solar active regions.

These solar and GRB events observed by BARREL remind us of the origins of solar high-energy astrophysics (soft X-rays, hard X-rays, gamma rays, "solar cosmic rays"), where many interesting properties of solar active regions at high energies were first discovered a half-century ago, by Winckler and his group.