At the Aalto University Metsähovi Radio Observatory (MRO) located in the Helsinki region of Finland (GPS: N 60 13.04 E 24 23.35), we measure solar radiation at several radio frequency bands on a daily basis. During the summer time, due to the far northern location of Metsähovi, we are able to do daily 14-hour continuous solar observations. This ability is remarkable and brings a peculiar twist to our observations. The long time series measured at Metsähovi (since 1978) enable studies of the long-term variability in the Sun, for example, by investigating the patterns of flares and the "S component" of solar radio brightenings. Long measurements observed during a single day can be used for studying short term changes (so-called oscillations studies) in different structures (for example, radio brightenings and polar region brightenings). In addition, the versatile radio burst data are often analyzed for individual bursts, and systematically for statistical databases. 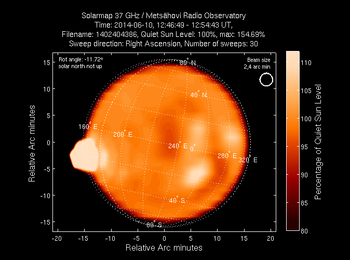 Solar maps at 37 GHz are produced with the 13.7-meter radio telescope, RT-14, which is a Cassegrain-type antenna. The radio telescope provides full-disk solar mapping, partial solar mapping, and, additionally, the ability to track any selected point on the solar disk. The beam size of the telescope is 2.4 arcmin at 37 GHz. The receiver is a Dicke-type radiometer, so the radiometer’s background noise is filtered out efficiently. For the temperature stabilization of the receiver, a Peltier element is used. The noise temperature of the 37 GHz receiver is around 280 K, and the temporal resolution during the observations is 40 ms or less. The radio emission is recorded as a calibrated flux. More information about the Metsähovi RT-14 can be found in References [1] and [2], and we routinely make solar maps available on line.

We strive to produce at least one solar radio map every day with the 13.7-meter radio telescope at 37 GHz. During summers (April-September) the 13.7 meter radio telecope can be used more extensively for solar observations. Then, we can, for example, follow a single radio brightening for several hours.

Metsähovi RT-1.8 is a radio telescope with a 1.8 m dish diameter dedicated to continuous solar observations. The telescope has a beam size of 81.6 arc min and its system noise temperature is 270 K. It observes the total radiation of the Sun at a frequency of 11.2 GHz. The brightness temperature of the quiet Sun Level (QSL) is around 12,000 K at this frequency. The radio telescope is used for observing solar radio bursts, as it acts as a detector of general solar activity, including studies of solar oscillations. The high sampling rate (5 kHz) enables studies of flare fine structure, including short-period oscillatory phenomena. The radio telescope has no protective radome, so it is unfortunately vulnerable to the prevailing weather conditions. Around 200 solar radio bursts have been detected since its inception in 2001. Full documentation of the Metsähovi RT-1.8 can be found in Ref. [3].

The latest MRO at 11.2 GHz can be accessed from here: [1], and Figure 2 shows the long June day's observations corresponding to the map in Figure 1. The X-class flare SOL2014-06-10 was not well observed by RHESSI, but there is some information, and there are Fermi data.

A summary of MRO's daily solar observations can be found here: [2].

Observations at 50-845 MHz with Callisto 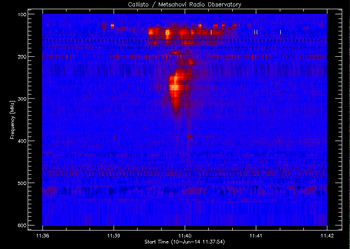 MRO joined the e-Callisto worldwide solar radio-burst observing network in the fall of 2010 (Ref. [4]). The network is coordinated by ETH Zürich and consists of 69 instruments in 38 locations all over the world, covering solar radio spectral observations 24 hours a day throughout the year. The network focuses on the decimeter and meter wavelength ranges. The first radio emission coming from the solar corona observed with our Callisto system came on September 24, 2010). The current frequency coverage in Metsähovi is 50 - 1450 MHz (a lower band is 50 - 845 MHz, and a higher band 790 - 1447.250 MHz), but we are in the process of changing the system to measure two polarizations at a frequency range of 50 - 845 MHz to enable studying the solar magnetic field. Due to low instrumental sensitivity, studies of the quiet Sun are not possible with this instrumentation.

The Aalto University Metsähovi Radio Observatory has been actively doing solar observations since 1978 at 37 GHz, and we note that high radio frequencies are particularly interesting in the RHESSI context. Currently we do continuous solar observations at 11.2 GHz and 50-845 MHz, and produce daily solar maps at 37 GHz. Due to MRO's far-Northern location 14-hour long solar observations are possible during summers. The MRO quick look data can be accessed via the links attached above. You can request particular measurement data via email to: juha.kallunki@aalto.fi .

[2[ "Studies of Solar Activity with Emphasis on Quasi-Periodic Oscillations" (Doctoral Thesis, University of Turku, Ser. A I Tom. 467, Turku, 2011)