Dynamic Processes of the Moreton Wave on 2014 March 29

In 1960, a large-scale wave-like disturbance in the chromosphere associated with a solar flare was discovered in the Hα line by Moreton [1] and Moreton & Ramsey [2]. This wave phenomenon, now commonly termed a "Moreton wave," usually travels as semicircular fronts throughout the chromosphere over large fractions of the solar disk. It emanates from the flare site and typically has propagation speeds of 500-1500 km/s. It was not until 1968 that the origin of the Moreton wave was nicely explained by Uchida [3]. In Uchida's model a solar flare generates a global MHD shock wave in the corona, which compresses and pushes the chromospheric plasma downward, resulting in the Moreton wave itself. Observations in the wing of the Hα line reveal that the leading front of the wave appears as enhanced absorption in the red wing and as a reduced absorption (brightening) in the blue wing, followed by a fainter and reversed pattern. These characteristics are interpreted as depression and a subsequent relaxation process of the chromospheric material, as a consequence of the plasma is forced to move downward during the passage of the wavefront.

The 2014 March 29 X1.0-class flare is one of the best observed events, perhaps the best so far. It was captured in a wide range of wavelengths with unprecedented spatial and temporal resolution by ground-based and space-borne instruments. Several phenomena accompanied this flare, among them a fast filament eruption and a globally propagating disturbance in the corona, seen in the chromosphere as a Moreton wave. This flare was successfully detected in multiwavelength imaging in the Hα line by the Flare Monitoring Telescope (FMT) now at the National University San Luis Gonzaga, Ica, Peru. The observations of the FMT in the wing of the Hα line (±0.8Â) offered us a good chance to study the dynamics of the Moreton wave, and particularly to focus on the Doppler characteristics of the wavefront and the velocity amplitude of the perturbation in the chromosphere.

The top panel of Figure 1 presents a time-difference image recorded at Hα +0.8Â (the red wing), while the bottom panel shows the time-evolution of the X1.0 flare in X-rays detected by [GOES] (1.5-10 keV) and RHESSI (25-50 keV), respectively. In Figure 1, the Moreton wave is identified as an arc-shaped front traveling north-east from the flare site. The propagation speed of the Moreton wave varies from one trajectory to another (P1-P4), and the estimated values range between 640-859 km/s [4]. In order to compare the nature of the Moreton wave with its associated coronal counterpart, multiwavelength time-distance diagrams including XRT, AIA, and FMT observations are presented in Figure 2. These diagrams reveal that the corona, transition region, and the chromosphere reacted quasi-simultaneously to the global-scale wave propagation in the solar atmosphere triggered by the flare. 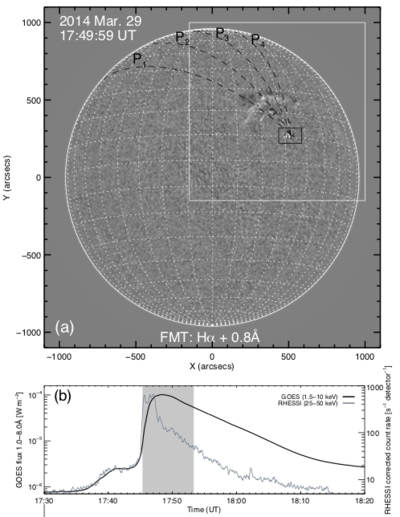 Figure 1: (a) The Moreton wave on 2014 Mach 29 captured by the FMT. The black rectangle marks the flare site, while the black dashed lines outline the paths (P1-P4) along which the kinematics and the velocity amplitude of the Moreton wave are calculated. (b) Time evolution of the X1.0 class flare detected by GOES and RHESSI. The gray area denotes the time period at which the Moreton wave is observed. (From [4]) 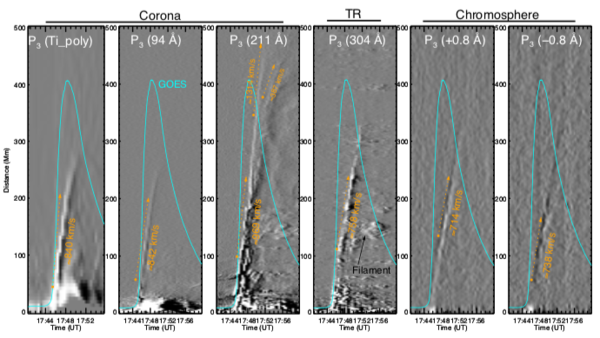 Figure 2: Time-distance diagrams of the disturbance in the corona (soft X-ray Ti_poly, 94 and 211 Â), transition region (304 Â, and the chromosphere (Hα ±0.8α) caused by the global wave propagation in the solar atmosphere associated with the 2014 March 29 flare. The intensity variation was calculated from running difference images along the trajectory P3 shown in Figure 1. (From [4]).

The Down-up Swing Disturbance in the Chromosphere

The Moreton wave is interpreted as a down-up swing disturbance in the chromosphere as a result of the compression produced by the globally expanding fast-mode wave or shock in the corona [3]. The down-up perturbation of the chromospheric layer induces the Doppler shift of the Hα spectral profile and brightness changes in the off-band images. Indeed, an analysis of the intensity profiles in the red (+0.8Â) and blue (-0.8Â) wings of the Hα line confirms such down-up disturbances caused by the arrival of the coronal wave to the chromosphere [4]. Figure 3 shows intensity profiles at Hα +0.8Â obtained along trajectories P3 and P4, wherein the reaction of the chromosphere to the wavefront passage is evidently noted. 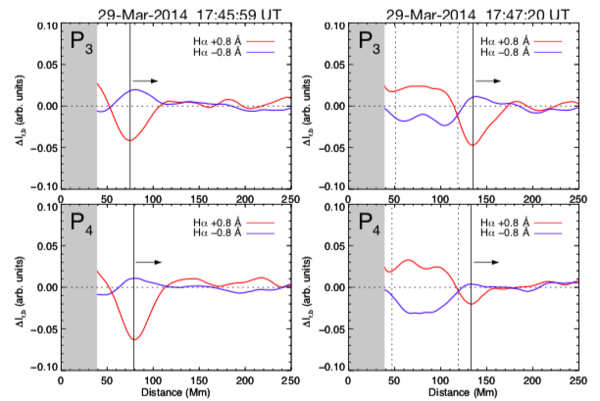 Figure 3: Hα intensity profiles at +0.8 Â (red wing) and -0.8 Â(blue wing) relative to the quiet-Sun conditions, computed along trajectories P3 and P4 shown in Figure 1. The profiles at +0.8 Â exhibit a strong dip (redward), while at -0.8 Â the intensity is slightly enhanced. This intensity change is an indication that the Hα spectral line has bodily shifted redward in the initial response. The intensity profiles also show subsequent variations (vertical dashed lines at 17:47:20 UT) showing a reversed pattern; this delayed disturbance is related to the relaxation process of the chromosphere. (Adapted from [4]).

The manifestation observed in the Hα intensity profiles (Figure 3) is in response to the compression exerted by the large-scale wave traveling in the corona as pointed out above. That is, the downward component of the coronal wave pushes the transition region down and sets the motion of the plasma in the chromosphere. Quantifying the velocity amplitude of the disturbance in the chromosphere is a key aspect to better understand the interaction between the coronal wave and the chromosphere. The combination of the Hα +-0.8Â intensity profiles presented in Figure 3 allows us to quantify the velocity amplitude of the plasma moving at the front of the Moreton wave (see [4]). The results are shown in Figure 4a as perturbation profiles, which show a successive depletion (downward motion) caused by the wave front passage. In the Figure one sees that the downward motion of the chromospheric material attains a maximum velocity of 4 km/s. Also note the subsequent relaxation processes of the chromosphere (upward motion).

Thanks to the unprecedented capability of the AIA, more precise diagnostics of the temperature and emission measure of the plasma in the corona is now possible. For example, based on the differential emission measure (DEM) analysis, the density jump or compression ratio of the coronal wave can be estimated (Figure 4b). The compression ratio is directly linked to the shock strength in the corona, and we expect a high compression ratio in the absence of a strong magnetic field; therefore, under this condition we may expect a strong reaction of the chromosphere. The reaction of the chromosphere can be seen comparing panels (a) and (b) of Figure 4, wherein high compression ratio is closely connected to the large velocity amplitude of the Moreton wave. 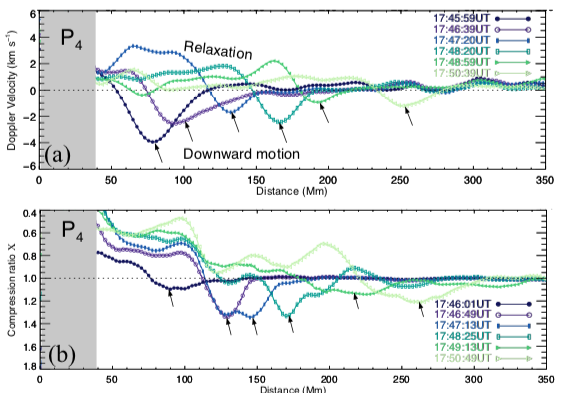 The Moreton wave associated with the SOL2014-03-29 flare has brought interesting insights into our picture of chromospheric and coronal disturbances. The multiwavelength coverage permitted us to reveal details of how the different layers of the solar atmosphere reacted to the large-scale wave propagation. Thanks to the observations in the wing of Hα performed by the FMT, it was possible to quantify the downward motion of the plasma at the front of the Moreton wave. This is important to examine the strength of the disturbance in the corona and the chromospheric reaction. For example, based on the velocity amplitude of the Moreton wave the plasma velocity in the corona can be estimated, even more, it can used to derive the Mach number (see [4]) . It was found that a high compression ratio of the coronal wave approximately matches (in distance and time) the most prominent downward motion seen in the Hα perturbation profiles. It is worth noticing that the compression ratio presented in this work is based on the DEM temperature range 6.1 < logT/K < 6.4, which matches expectation for a confined region above of the coronal base (see details in [4]).