The Expanded Owens Valley Solar Array (EOVSA) is now obtaining scientifically valuable solar data in total power mode. These data are unique in their combination of frequency coverage (2.5-18 GHz), frequency resolution (40 MHz), and time resolution (1 s). Since 2014 October, the instrument has been observing daily and has captured data for dozens of flares, including three GOES X-class events (SOL2014-10-24, SOL2015-03-11, and now SOL2015-05-05). The most recent flare was quite remarkable due to the fact that its X-ray emission extends well into the gamma-ray range. This nugget gives an overview of the flare and shows the correspondence between the microwave and hard X-ray emissions. 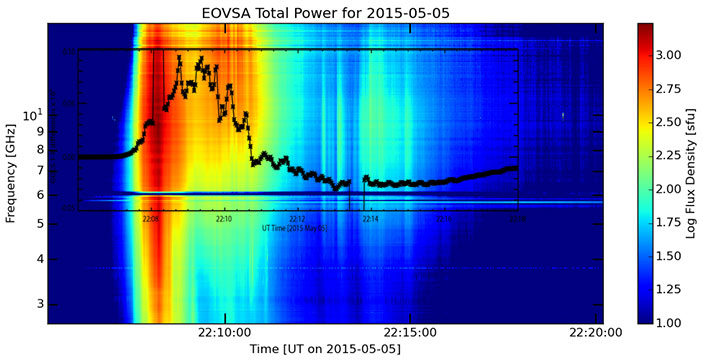 Figure 1: EOVSA Total Power dynamic spectrum of the flare measured at 332 frequencies from 2.5-18 GHz, with 1 s cadence, and displayed with a logarithmic intensity scale. The light-curve superimposed is the derivative of the GOES 1-8 A flux. The radio flux density reached nearly 2000 sfu. Some frequencies near 6 GHz are contaminated with man-made radio frequency interference.

Figure 2 shows the corresponding hard X-ray emission at several energy channels from both Konus WIND and RHESSI, where the energy binning from the two spacecraft has been chosen to be similar, for Konus 22-82 keV, 82-329 keV, and 329-1253 keV. Figure 2 also shows the RHESSI photon energy spectrum at the peak time, which extends clearly beyond 300 keV. Note that the energy resolution of Konus is about 25% at 20 keV. The emission spectrum exceeds the background to at least 1 MeV, which indicates that the electron bremsstrahlung from this event extended to very high energies; Konus sees gamma rays with good SNR to energies well above 7 Mev, where the inelastic-scattering line emissions become weaker. There is a potential for line emission, also, but preliminary checks indicate that the 2.2 MeV line is weak, at least with the current energy resolution of RHESSI.

There is an intriguing feature in the radio emission—two short duration radio peaks in the 3.86 GHz curve (red) at 22:10:35 UT in Figure 2, which seems to correspond to similar peaks in the 329-1253 keV light curve of the Konus WIND instrument. These two features have a bandwidth of only a few GHz and appear in only one 1-s time bin.

The flare was associated with a very fast erupting filament seen in AIA, a large east-limb coronal mass ejection (CME) seen in LASCO, and a type II burst with speed estimate at 1160 km/s. Its position on the East limb means that no substantial space weather effects were seen at Earth, except for the direct X-ray and EUV emission, which prompted a strong (R3) short-wave radio blackout. The RHESSI images up to 300 keV are shown in Figure 3, along with a preliminary >300 keV image (purple contours). In the early part of the first peak, before AIA became too saturated, the 131A image shows a loop joining the RHESSI 100-300 keV hard X-ray sources. The > 300 keV image appears larger because of the lower resolution of RHESSI at these energies (the finer grids are not as effective for higher-energy photons).

The recent X2.7 flare of SOL2015-05-05 was unusually energetic in its non-thermal properties, and merits further study. The unique microwave data provided EOVSA give the opportunity to study the time behavior of the pulsations more closely, and to relate them to the magnetic field in the source region due to the microwave spectral dependence of peak frequency on magnetic field strength. Although the 13-antenna EOVSA array is not yet able to provide images, this capability is coming soon as the first He-cooled receiver is being readied for deployment on one of the 27-m antennas. The sensitivity of these receivers will provide excellent calibration for imaging. When in full operation, EOVSA will be able to image every frequency-time bin in the dynamic spectrum of Figure 1, providing the capability of dynamic magnetography of flaring loops [2].

We thank Eduard Kontar and Valentin Pal’shin for help and encouragement here.