How does flare energization work? What is initial proportion between energy components and how does this evolve with time? How, where, and when can accelerated particles effectively heat ambient plasmas? We can study this by looking for temporal relationships between non-thermal emissions of accelerated particles and thermal emissions produced by plasma heated during a flare. Here the so-called "non-thermally dominated" solar flares may be the easiest to follow. These events are recognized by an absence of pre-flare heating, weak thermal response, prominent non-thermal emission, and compact structures with a strong magnetic field (as a recent statistical study see Ref. [1]).

We have now investigated the non-thermally dominated solar flare SOL2013-11-05, which was well-observed by AIA as well as RHESSI (Ref. [2]).

EUV and X-ray analysis with AIA and RHESSI

We (Ref. [2]) employ AIA data to quantify the moderately heated component of the flare plasma in the temperature range 0.5-25 MK. We use the RHESSI data to quantify the hot component of the flaring plasma, to which RHESSI is more sensitive, and the non-thermal component. We compare non-thermal energy input with thermal response to describe the energy budget of the flare. The total energy of the non-thermal particles is transformed into the thermal energy of the heated plasma in two sources, where one source (loop) is tenuous and hot, while the other dense and colder. The EUV observations show two connecting loops in the horizontal direction, implying a loop-loop interaction (Figure 1L). This comparison does not leave any room for other plasma heating processes (Figure 1R). 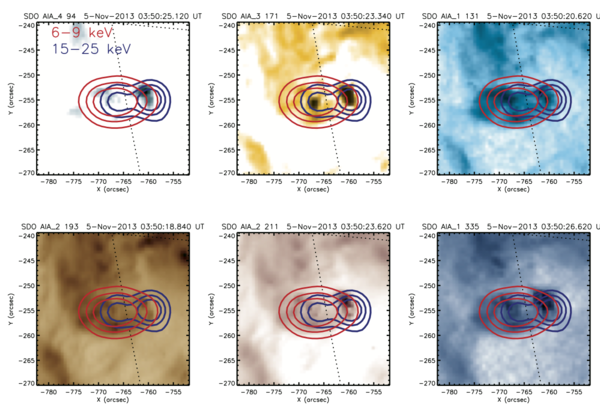 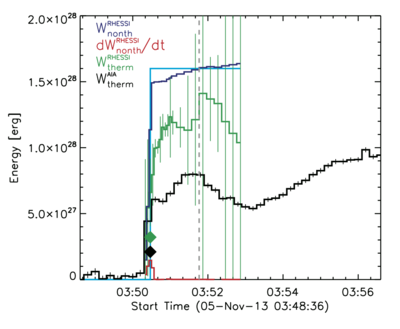 'Figure 1R: Time evolution of the energy components in the flare. The green and black diamonds indicate the model values of thermal energies for loops 1 and 2. The light blue line shows the modeled total deposition of the non-thermal energy.

Modeling of the 2013 November 5 flare

To validate the picture, we build a 3D model based on the SDO/HMI vector magnetogram and nonlinear force-free field (NLFFF) reconstruction (Ref. [3]). Using the GX Simulator tool (Ref. [4]) we compare the X-ray and microwave spectra and images, modeled and observed, and thus validate our model (Figure 2). The model is tuned to be in agreement with the observations. The model demonstrates a two-loop configuration, spatial distribution of thermal plasma and non-thermal electrons in the two loops (Figure 2). The individual contributions of each loop are shown in Figure 1 (right panel) by diamonds.

Figure 2: The 3D model with two flux tubes (closed loops) filled with thermal plasma with dark red (a) and non-thermal electrons with blue-green (b) for the hard X-ray impulse time overlaid on the LOS HMI magnetogram.

We have found that morphologically the flare consisted of two compact flux tubes, where a single episode of electron acceleration happened. The non-thermal energy deposition over the impulsive flare phase matches the thermal energies of the two flaring flux tubes. There is no statistically significant room for other sources of energy.

Co-authors Gregory D. Fleishman and Eduard P. Kontar contributed to this work and to Ref. [2].