We don't really understand the mechanism(s) that drive the heating and the transport of energy through the solar atmosphere. The corona generally has a pervasive substructure of bright loops. There are two common conjectures about how loops are heated and thus become bright: (1) the thick-target model, wherein electrons accelerated down a flaring loop deposit all of their energy through Coulomb collisions with the ambient atmosphere, and (2) the in situ heating model, wherein the plasma is heated directly near a region of magnetic reconnection, which can then drive a strong thermal conduction front. Both models have had success in predicting many observational features of solar flares, although they remain rather difficult to differentiate. The purpose of this Nugget is to emphasize that the atmospheric response to these two mechanisms is strikingly similar if the accelerated electrons have fairly low energy (are "mildly non-thermal"), so that it is not simple to conclude the absence of accelerated particles in many situations.

There have been a number of studies claiming that heating via a non-thermal electron beam is implausible and thus appeal to an in situ heating scenario. For example, the absence of a significant hard X-ray burst may be taken as evidence for the rejection of a thick-target model [Ref. 1]. This argument often is buttressed by the idea that the non-thermal particle spectrum needs to have an atypically steep distribution. Alternatively, even microscopic events (nanoflares?), often described in thermal terms, may appear to have thick-target properties such as bright footpoint emissions [Ref. 2].

Simulations of two sorts of heating

In this section, to demonstrate that these two extreme descriptions of plasma heating very hard to distinguish, we run simulations with the HYDRAD code, which can deal with hydrodynamics and radiative transfer self-consistently in a time-dependent model [Ref 3]. We use parameters often used to describe a small flare. We assume a total energy release of 7.5 x 1028 erg, on a loop of length 50 Mm, with a constant cross-sectional area of 2 x 1017 cm2. Heating proceeds for a total of 100 seconds, with a 50-second rise and 50-second decay phase. The initial density and temperature structures are found by integrating the hydrostatic equations from foot-point to foot-point. The initial coronal density must be rather low (below 109 cm-3). For higher densities, the heating mechanisms would appear even more similar as the beam heating will be even more quickly be confined to the apex.

Three simulations are performed for heating purely by a beam of electrons. We describe such a beam as F(E) ~ E-δ, and for these simulations we take δ = 10 above a minimum cut-off energy. We assume cutoffs of 1, 2, and 3 keV. We finally run one simulation with a purely thermal heating model, with the energy released in situ in an assumed volume at the apex of the loop.

Figure 1 shows the spatial/temporal structure of the heating in the four cases. Energy deposition by low-energy electrons quickly becomes localized to the corona as chromospheric energy brings material upwards (" evaporation"), thus decreasing the mean free paths of the electrons. Although there are differences in the temperatures, densities, and velocities, these are often quite small and would be rather difficult to differentiate observationally. 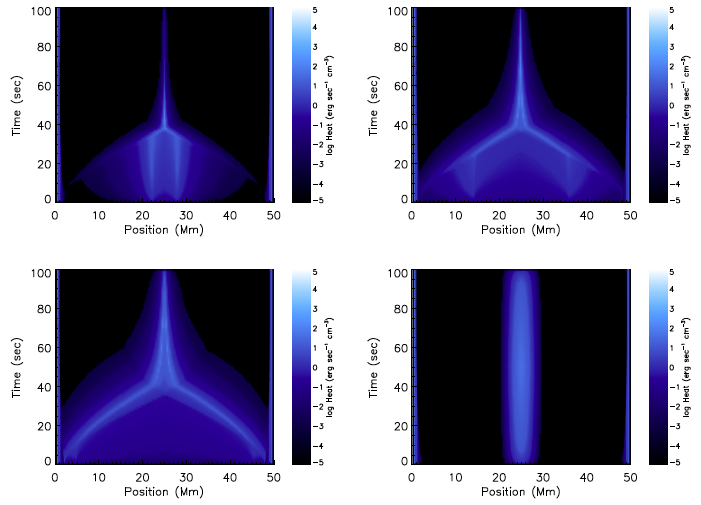 Fig. 1: The energy deposition as a function of time and position in the four simulations. From left to right and top to bottom, simulations with a beam and a cut-off energy of 1 keV, 2 keV, 3 keV, and one with purely thermal heating. In the beam heating scenarios, the energy deposition quickly becomes localized to the apex of the loop as the beam strengthens.

Figure 2 shows the flows that develop as the heating proceeds. In spite of the physical differences in the deposition, all cases seem similar, and this is true of the resulting temperature and density distributions in the model loop as well. 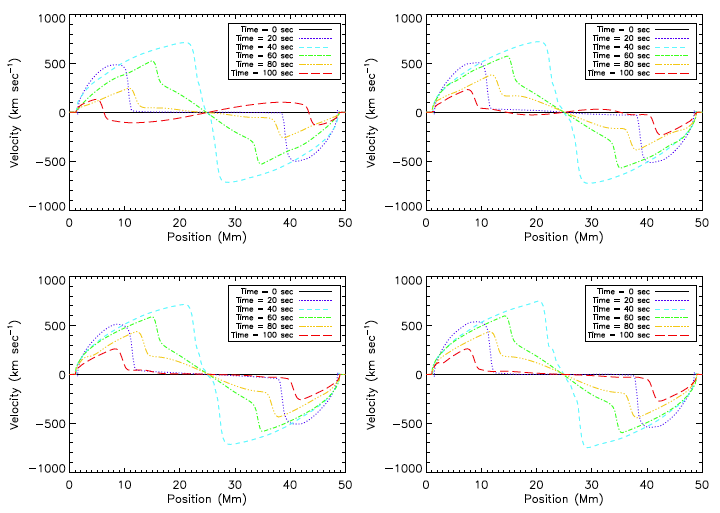 What about X-ray emissions? Figure 3 shows X-ray light-curves calculated from the four simulations, using common RHESSI energy channels. The results are again extremely similar, with slight differences in intensities due to the differences in densities. It is important to note that the thermal simulation actually has the strongest HXR burst, although it would probably not be detectable.

Fig. 3: X-ray light-curves in a few common RHESSI energy channels, calculated from the simulations, again in the same order. Perhaps surprisingly, the thermal simulation has the strongest HXR burst in the 12-25 keV channel.

As shown briefly above, the atmospheric response to heating by mildly non-thermal particles is extremely similar to direct in situ heating of the plasma. Strong chromospheric evaporation can be driven both through a particle beam and by a thermal conduction front. Further, the X-ray emissions as might be seen by RHESSI can be nearly indistinguishable. The explanation for this behavior is simple: the stopping depths of low-energy electrons are significantly less than for high energy electrons, so that low-energy electrons will deposit their energy in the corona, even at low densities [Ref. 4]. The heating by an electron beam would then be nearly the same as direct plasma heating. The main conclusion of this Nugget is simply that caution must be taken to conclude that a heating event (whether it be a flare, nanoflare, or something else) does not have electron acceleration.