Flare Observed by a Dozen Instruments

We live in a golden age for research on solar flares, observationally speaking. This statement reflects not only the existence of powerful satellite observatories (RHESSI, Hinode, SDO, Fermi, STEREO, and now IRIS, as well as basic standbys such as GOES), but also advanced, high-resolution instrumentation at ground-based observatories such as the powerful INAF/NSO IBIS instrument. limited of course by the day/night cycle, weather, and seeing conditions. In addition many spacecraft also observe the interplanetary consequences of a solar eruption. Count the instruments up and one quickly exceeds a dozen; these instruments individually mostly have unique capabilities and people cheerfully write papers about their particular individual discoveries. Put them all together and one has a wonderful opportunity to gain a broad insight into flare development, if fortune smiles and many actually have suitable coverage.

All of the observatories listed above got some data, mostly with good coverage and with correct pointing. A high-resolution observatory can often miss a big flare simply by staring at a different area or active region than where the flare occurs. For general reference we offer Figure 1, showing the basic GOES time history.

Figure 1: Three different views of the basic time-series soft X-ray data for the flare, from NOAA's GOES. The plots show the flux (blue), its time derivative (red and gold), and a blow-up of four minutes in the impulsive phase (right). The left panel is a standard log-scaled plot, and the right two are more direct linear scalings. The sign of the time derivative is reversed and plotted in gold where it turns negative (the decay phase). Note the presence of impulsive-phase pulsations and likely oscillatory variations in the gradual phase.

The Interferometric Bidirectional Imaging Spectropolarimeter (IBIS) is one of several excellent ground-based instruments in the field now. This instrument obtains nearly monochromatic, 2D images of the Sun in a series of photospheric and chromospheric spectral lines. The Fabry-Perot interferometers at the heart of the instrument are quickly tuned to different wavelengths to build up a complete sampling of the lower solar atmosphere in just a few tens of seconds or less. Figure 2 shows the line core intensity of the (chromospheric) Ca 8542 A line at 17:42 UT, during the early phase of the flare development. The bright features are the flare ribbons.

Figure 2: IBIS monochromatic image in the core of the Ca 8542 A line. This shows the early development of the flare, about three minutes prior to the spectroscopic "capture" of the erupting filament shown in Figure 3 (IRIS).

The newest participant is the IRIS spacecraft, the first really to target the "interface region" bridging the gap between the hot surface of the Sun (the photosphere) and the very hot corona. Figure 3 shows one slice of data from this instrument, which, like IBIS, records four-dimensional "data cubes" (two spatial coordinates, time, and spectrum) but using a dispersion grating. The figure shows one dimension of the full 2D imaging, which requires the scanning of its long slit; at each position it shows a high-resolution spectrum. In the image IRIS captures the dynamics of the flare's filament eruption, as seen about three minutes after the image in Figure 2 (IBIS). IRIS shows us that much of this flare resulted from the filament eruption and allows us to measure the filament's acceleration as it blasts off the Sun. 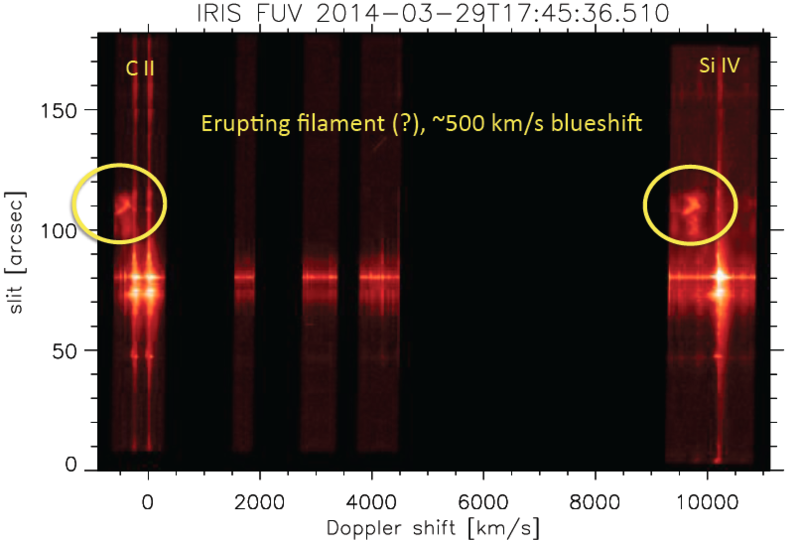 Figure 3: An IRIS observation of SOL2014-03-29. During this flare observation, IRIS was doing an "8-step-raster" meaning that it scanned 8 different positions on the Sun, each of them 2 arcsec apart, and they luckily coincided with the flare footpoints. The gold circles highlight a dynamic feature (big Doppler shifts) that appear in two bright lines of ions radiating at transition-region temperatures.

It is confusing that IBIS and IRIS have such similar acronyms!

It often happens that a major flare happens and everybody in the community scrambles to write a "gee whiz" paper about the particularly noteworthy thing their instrument has seen. Often, of course, they include as much data from other sources as possible, and of course they work hard at drawing physically meaningful conclusions. Nevertheless they tend to work simultaneously and not necessarily in a coordinated way, and what appears in the literature may be disorganized as a result. In view of the breadth of coverage for this very nice event, many research workers will be studying it.

Only seldom does the community do a retrospective look at a given well-observed event, but we recommend that here because of the excellent coverage. We look forward to a review of all of the observations in a year's time.

We also suggest that research workers contact the authors of this Nugget or Peter Young (mailto:pyoung9@gmu.edu) for help in joint analyses or coordination as desired.