Solar flares invariably emit soft X-rays, due to their injection of hot plasma into the corona. These soft X-rays have become the defining property of a flare, and the GOES X-ray class (A, B, C, M, X) its most popular metric. The database really began with the launch of SOLRAD-1 in 1960; this earliest astronomical observatory in space initially found the relationship between short-wave fadeouts and solar flares. Sensors similar to SOLRAD's X-ray photometers found their way onto the GOES series of weather satellites. The very first GOES satellite, GOES-1, carried a "Space Environment Sensor" package that extended the SOLRAD soft X-ray observations begun with SOLRAD. Other early soft X-ray photometers appeared on other satellites of that early era, notably OSO-1, launched in 1962, and Ariel-1, launched the same year.

Some confusion might arise from the cultural gap between RHESSI scientists, who tend to think of spectra in terms of energy units (keV), and X-ray spectroscopists, who may be happier in wavelength space (nm or Å). In particular the GOES/XRS channel A (nominally 0.5-4 Å) may sound like a hard X-ray sensor, since the lower-limit wavelength seems to correspond to 25 keV or so. This Nugget clarifies that conversion and also points out a tricky background source for this channel in particular.

The first entry in the GOES database of solar flares would now be termed SOL1975-09-01T15:19 (listed in that era as C 0, although that sounds a bit strange now). The classification C1.0 would now be the weakest C-class flare, with the C representing a base-10 logarithm of the peak energy flux, and 1.0 the mantissa of the logarithm converted back into a proper number. The meaning of the letter designations may be lost in history, and although flares weaker than A-class and more powerful than X-class are well-known now, no generally accepted extension of the letter-logarithms has taken hold.

Now called the XRS (X-ray Spectrometer) instrument, up until the present these sensors consist of pairs of gas-filled ionization chambers with spectral response limited to about 1-8 Å and 0.5-4 Å by choice of fill gas (argon or xenon) plus the thickness of the entrance window. Although broad-band and hardly spectroscopic in nature, these two bands allow for a basic measurement of a weighted mean temperature of the flare plasma - typically in the narrow range 10-30 MK (106 Kelvin) at flare peak. 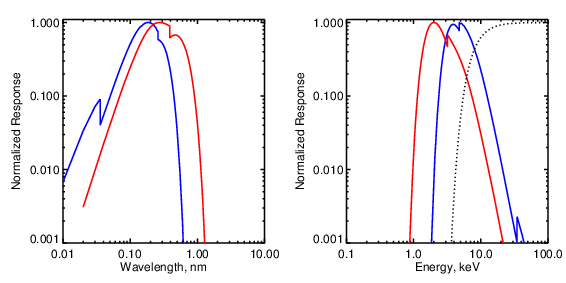 Figure 1: GOES-13 spectral response: left, in wavelength units; right in energy units. The dotted line on the right-hand plot shows the RHESSI response. Note that the GOES responses are calculated here in terms of energy fluxes correctly, but that the RHESSI response is for photon transmission, so it is only a crude approximation.

Because the plots in Figure 1 are on logarithmic scales, one wants to be careful about the actual contributions, which must be assessed directly. To see the distribution of the response of each channel, we should take a model spectrum; for soft X-rays we get excellent modeling from atomic-physics codes such as CHIANTI. Figure 2 shows the same response curve as in the right-hand panel of Figure 1, convolved with CHIANTI isothermal fits at 5 MK and 20 MK, characteristic of flares early and late in their time development. Active regions and the quiet corona typically have much lower temperatures. 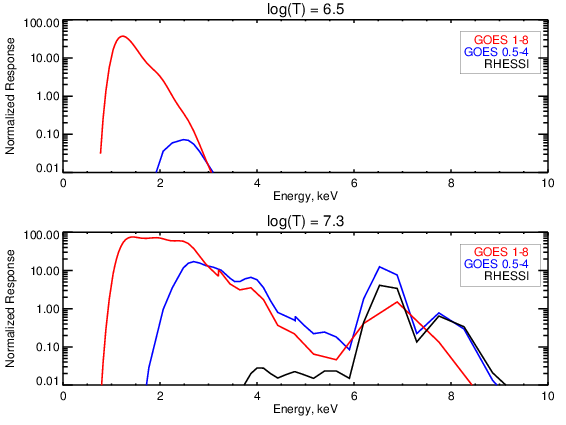 Figure 2: GOES-13 spectral response convolved against model thermal spectra from the CHIANTI database. Upper, a cool flare temperature (5 MK), and lower, a hot one (20 MegaK). At temperatures above about 8 MK Fe K-shell radiation becomes important, and one can see this (mainly Fe XXV) at about 6.7 keV.

These plots have some really interesting aspects. For the low-temperature one, the linear version of the plot shows that the two GOES bands have peak responses at 1.24 and 2.48 keV (a nice coincidence), and bandwidths of about 20% around these photon energies. These peak energies, for low model temperatures, will not depend strongly upon the actual value of the temperature. For the hot spectrum, though, the XRS A band (0.5-4.0 Å) does become a broad band: its full width embraces the Fe feature, which the convolved model spectra show at 6-7 keV.

This sensitivity of GOES to the K-line feature opens an interesting question, which has not been addressed in the literature (we think) but might be. A solar flare typically excites a broad range of temperatures in the footpoints of its coronal magnetic loops - how hot does this chromospheric material actually get? Typically there is no clear impulsive-phase signature in the GOES/XRS A channel (see, e.g., a previous Nugget on this topic). This might suggest that Fe XXV does not form in the chromosphere despite the intense energy release there. This remains an interesting research question.

The advent of solar minimum, and the improved instrumentation in the current GOES spacecraft series (GOES-13, -14, and -15) have allowed us to get a clear picture of a non-solar effect prevalent in the data, especially in the XRS A channel (0.5-8 Å). Figures 3 and 4 illustrates this effect via recent GOES-15 data.

Figure 3: GOES-15 data from January 8-10, 2017. The left panel shows the standard log-scale timeseries plot, and the right panel shows the correlation between the two channels at best 2-s cadence. The flares on the 10th produce the open loops (clockwise circulation) resulting from the isothermal temperature peaking prior to the emission measure, consistent with the Neupert effect

This non-solar contribution to the high-energy channel can be confusing, because the phenomena causing it have some flare-like properties: often fast-rise/slow-decay time profiles, for example. But the spectrum is entirely wrong, as the right-hand panel of the figure shows. Flare soft X-rays have a distinctive pattern in a hard-vs-soft correlation plot, namely a clockwise circulation with time that reflects the early temperature peak. The ratio circulates around a well-defined mean line, which we interpret with CHIANTI to be the line defined by thermal sources at 5-20 MegaK temperatures at varying emission measures. 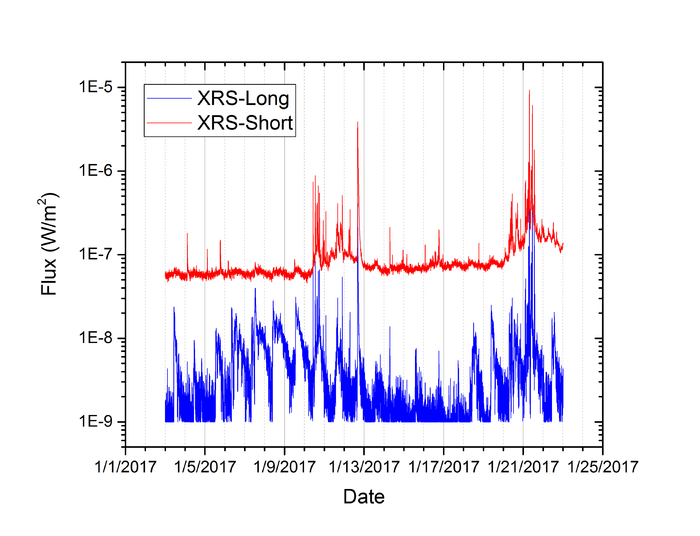 Figure 4: A clear view of the non-solar effects in the GOES time series: a long view that reveals diurnal and other secular trends in this geophysical background term (Ref. [2]).

What is the origin of these non-solar counts? They are due to particles in the Van Allen belts, which have a diurnal modulation because a satellite in the geosynchronous orbit of GOES must "fly" at a constant radial distance from the Earth, through the asymmetry of the magnetosphere induced by solar-wind ram pressure. Ref. [2] describes these effects. GOES/XRS shields magnetically against low-energy fast electrons electrons, but some may leak through and produce direct signals. There may also be secondary effects such as bremsstrahlung or neutrons resulting from particle interactions in the body of the spacecraft. We can see a clear diurnal phase pattern, suggesting that the interference has a local-time organization, as the geomagnetic tail does.

The "new" GOES data (GOES-13, -14 and -15) have improved sampling that lets us see the weaker solar fluxes better. This has resulted in the application of scaling factors (0.85 and 0.70 respectively) for channels A and B, to extend the calibration derived from earlier GOES sensors.

We are now getting a good look at weak GOES signals because solar minimum is almost upon us. These low-flux data are important because of new observations; not just RHESSI but also from programs like SphinX, MESSENGER, and MinXSS. We also expect much better soft X-ray observations from the still newer series of GOES satellites, GOES-R, -S, -T, -U of which GOES-R has already been launched and renamed GOES-16. These spacecraft have XRS sensors based on silicon diodes (not ionization chambers) and will have sensitivity to much lower X-ray flux values than the previous XRS sensors. It is now believed that to get the correct physical units, the scaling should have been applied to the older data instead of to GOES 13-15.

The GOES 16 X-ray detectors were actually calibrated at NIST, while all of the previous GOES were merely characterized. They will therefore set a new calibration standard for GOES X-ray measurements. Unfortunately, this will mean that someone blindly counting M and X class flares and comparing the next solar cycle with the last, will find more large flares in the future data.