Whenever a characteristic time scale appears in an astrophysical observation, we have learned something new about the object we're studying. For example the entire body of the Sun is perpetually oscillating, providing the many precise frequencies measured by the methods of helioseismology. For several decades astronomers have observed curious oscillations and pulsations in various emissions associated with solar flares, which are mainly detected in the chromosphere and corona. Collectively these variations are usually known as "quasi-periodic pulsations" or QPP, although their properties vary considerably. By their name one appreciates that they are not the sharp resonances of helioseismology, but they do contain unique information, probably relating to a broad range of flare components. The periods of oscillation, for example, can vary from fractions of a second up to several minutes and the energy band in which QPP are observed can vary from radio waves to white light, ultraviolet and X-ray wavelengths. Understandably then, fully explaining these pulsations remains an active study in solar physics. Fortunately, recent advances in instrument technology, including the launch of the RHESSI satellite, have allowed us to probe these phenomena in more detail. An excellent example of the use of RHESSI in these studies was the subject of a previous Nugget.

The most popular - and likely - explanations for this phenomenon are (i) oscillating MHD modes in the flare, such as those also seen in coronal loops, and (ii) regimes of periodic magnetic reconnection, although there are of course other possibilities. One of the main difficulties is this: how can you observationally distinguish between these possiblities?

In an attempt to resolve this question, the emphasis in recent years has been on spatially resolved study of QPP events. However in many cases this is simply not possible. A prime example is the study of stellar oscillations, and even in the solar context it is rare to achieve good spatial resolution of QPP events. As we will show in this Nugget, this should not be taken as an insurmountable barrier to studying interesting QPP events. It is entirely possible to glean important information about QPP from time series data alone.

On 3rd July 2002 an X1.5-class flare exhibiting QPP occurred and was observed at a number of wavelengths, including by the Nobeyama Radioheliograph in the microwave band and by RHESSI in X-rays. The pulsations in this event were investigated in detail by Inglis and Nakariakov 2009. Perhaps most striking is the similarity between the pulsations in the microwave and X-ray data, despite the fact that they are generated by distinctly different emission mechanisms. 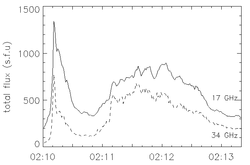 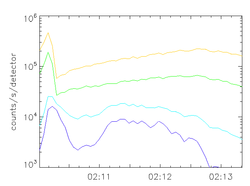 Time series data of the 3rd July 2002 flare from the RHESSI satellite. Thermal X-rays are the yellow and green curves, while hard X-rays are the cyan and blue.

A number of established techniques exist to study oscillations in time series, however for flares this is complicated by the short, impulsive nature of the events. Before studying the interesting fine structure, the evolutionary trends have to be removed from the signal, usually via bandpass filtering or a fitting function. Once this is done, two of the most popular analysis methods are the venerable periodogram and the more modern wavelet approach. The periodogram method is only capable of giving us global information about any periods present in observational data, but more positively it features a robust method for calculating the confidence level of spectral peaks. Wavelets on the other hand, are dynamic tools that allow us to study frequencies in data as a function of time.

The periodogram applied to the RHESSI time series data between 02:11 and 02:13 UT shows interesting results. To obtain a good compromise between spectral resolution and the signal-to-noise ratio, the RHESSI counts were binned in 2s intervals, while a bandpass filter was employed to remove the effects of RHESSI spacecraft rotation (which spins approximately every 4 s). From this data we found two significant periods, at 28 s and 18 s. 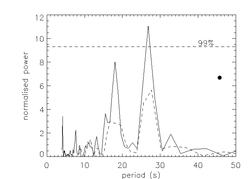 Periodogram of X-ray data showing the periods of 28s and 18s.

These two periods were also found in radio data from the Nobeyama Radioheliograph, as was a third period of 12 s. From the periodogram alone though, it is not possible to establish whether these periods are present throughout the event, or indeed to test how stable they are as a function of time. Fortunately, a convenient tool for such tests may be found in the form of wavelets.

The original wavelet of the flaring data shows that there are significant periods consistent with the periodogram. As a further test we take wavelets in three frequency bands corresponding to the detected periods. In this way we can show that all three periods co-exist for the duration of the QPP event.

Using the RHESSI satellite in tandem with radio data, we were able to detect three significant periods in an X-class flare from 3rd July 2002. These were 28s, 18s and 12s respectively.

Crucially, the ratios of these periods provides us with information about the driving mechanism for the QPP. We can quickly see that the ratio of the middle period to the longest period is ~ 0.64 and the ratio of the shortest period to the longest is ~ 0.43. For harmonics of a simple, non-dispersive resonator (i.e. a standing wave on a string) we would expect ratios of ~ 0.5 and ~ 0.33, so why our the measured values so different?

The answer is dispersion. MHD wave modes, in particular the sausage and kink modes, are known to be dispersive. This causes the ratios of standing mode harmonics to be significantly higher than the ideal standing mode case. Conversely, it is difficult to see why other pulsation mechanisms (i.e. magnetic reconnection) would result in this deviation from the ideal ratio. Due to the lack of pulsations at thermal energies during this flare, a kink mode - which is incompressible - would seem the likeliest candidate. 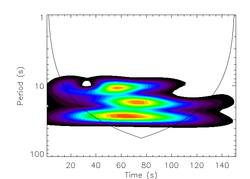 Morlet wavelet showing the persistence of all three periods throughout the flare.

The RHESSI satellite is an important tool in the study of flaring QPP, as it allows us to study the X-ray band with excellent time resolution. In this Nugget, we showed that it is invaluable in not only detecting multiple periods, but also in interpreting the result. The ratios of multiple periods can also be used to glean information about the driving mechanism for pulsations in flares. For the flare of 3rd July 2002, the lack of thermal oscillation leads us to the conclusion that an MHD kink mode is likely to be responsible for the observed oscillations.