Heating of the solar photosphere during a white-light flare

Solar flares, the most energetic events in the solar atmosphere, are occasionally observed along with enhanced radiation in the visible range of wavelengths. Famously, the original discovery of the flare phenomenon itself was via the "Carrington flare" of 1859, observed just in this way.

These so-called white light flares (WLFs) are now frequently observed with the Helioseismic and Magnetic Imager on-board of the Solar Dynamics Observatory, HMI/SDO. The Hinode/SOT spectropolarimeter can provide the most excellent imaging spectroscopy of such a flare, but it observes only through a long, thin slit at any given moment. Up to this moment, there have only been a few ground-based observations at high spectral resolution, and never with well-defined imagery. With the limited sampling provided by Hinode/SOT, we had to be lucky enough for the slit to be in exactly the right place. And, after 11 years of continuous observations, we were lucky enough that the raster scan of the Hinode/SOT spectropolarimeter crossed a WLF ribbon and observed spectropolarimetric profiles that allow us to study in detail the response of the solar photosphere to the X-class flare that occurred on September 6, 2017 (SOL2017-09-06T11:53).

The Hinode/SOT spectropolarimeter observes instantaneous Stokes profiles of two Fe I lines at 630.15 nm and 630.25 nm along a slit that scans across a region of interest. These spectral lines are always observed in absorption on the solar disc during non-flare conditions. However, in the case of the scan covering the X-class flare ribbons, we observed these lines in emission (or with strongly reduced line depth). We also have a raster scan of the same region taken approximately 0.5 hour later that we use for comparison. To determine the physical properties of the solar photosphere, we must do a "spectral inversion" to extract information about the structure of the atmosphere, as implied by the detailed profiles of the lines. We use the "SIR" code (Ref. [1]) for this purpose.

Except for the temperature, all atmospheric parameters were considered to be height-independent in our SIR application. To account for the complex emission profiles observed in the flare ribbon, we allowed the temperature to change at five optical depths. Note that any spectral inversion code (such as SIR) works at each point in the image (in our case, along the slit), and returns the parameters of the atmosphere in terms of optical depth, which scales with the geometrical height in the atmosphere.

Continuum intensitites extracted from the observed spectral profiles during the first and second raster scans are compared in Figure 1. The peak values of the intensity differences may be ascribed to the misalignment of the two scans and to the evolution of the fine structures at the edges of light bridges, penumbrae, and pores. These areas are therefore not used for the detailed analysis, even though some of their enhancements are due to the flare because the lines appear in emission. There are also regions, where the intensity difference is caused by the WLF ribbon. The largest of these regions is indicated by a blue contour in Figure 1 and our analysis is focused on it. 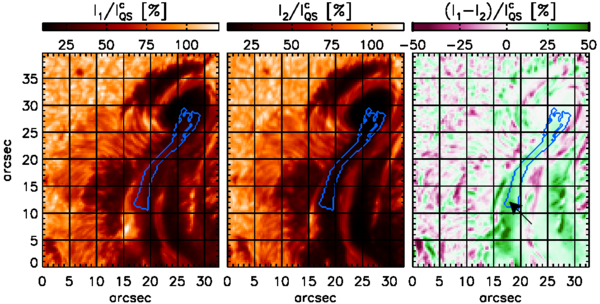 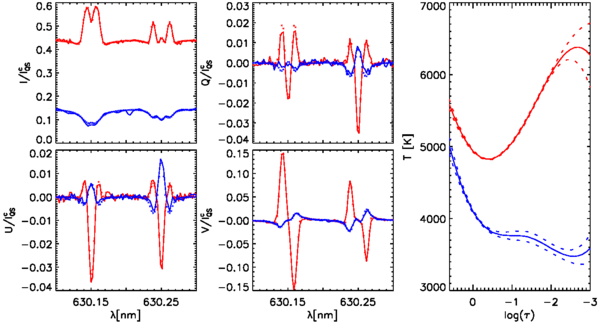 Temperature stratifications analogous to those shown in Figure 2 have been obtained in the whole field of view, pixel by pixel. In the regions of the WLF ribbons, we find temperature stratifications similar to the one shown in Figure 2. This increase in temperature with height is a potential mechanism that can explain the Stokes profiles observed in emission and naturally explains also the change of sign of the Stokes Q, U and V profiles. However, there are reasons to question the absolute values of the temperatures retrieved by SIR.

Figure 3: Comparison of the temperature stratifications resulting from the inversion of Stokes profiles, where the Stokes I profile was reduced by a flat continuum and the other Stokes parameters remained identical to those in Figure 2.

As shown in Fig. 2, the inversion code interprets the intensity enhancement in the WLF ribbon as due to increased temperatures at all optical depths. Specifically it predicts the heating of the solar photosphere around log τ = 0, where the actual photospheric continuum forms. Such an increase in temperature at this deepest photospheric layer is unlikely for several reasons. First, the observed emission profiles are never in pure emission in the quiet Sun. There always is a slight decrease in intensity in the far wings of the Fe I lines that indicates a temperature decrease above the height corresponding to log τ = 0. Second, if the temperature increase below the solar surface is real, the heating will have to be of a specific type, e.g. it must increase with depth because the atmospheric density significantly rises at those layers.

There are studies of WLF above the limb that conclude that the dominant source of the continuum radiation is located in the solar chromosphere, i.e. well above the line-forming region of the Fe I lines. Naturally, the inversion code SIR cannot account for such potential sources of chromospheric continuum emission as it is applied to photospheric lines that have no intensity contribution from the hotter chromosphere.. Instead of recognizing this, SIR must compensate for the continuum rise by increasing the temperature around the photospheric continuum-formation layer.

In order to mimic such a chromospheric optically thin contribution, we artificially decreased the Stokes I intensity by a flat continuum and did not change the Q, U, and V profiles assuming that this chromospheric contribution is not polarised. An example of this approach is shown in Figure 3, where we had to subtract 28% of the quiet-Sun continuum intensity to obtain a temperature stratification in the deep photosphere at the WLF phase comparable to the post-WLF phase (it is the same pixel as in Figure 2). Using this approach to all pixels in the analysed part of the WLF ribbon, we can estimate the temperature increase in the higher photosphere (around log τ = -2) that is most commonly around 600 K. It also allows us to conclude that the chromospheric contribution to the continuum intensity dominates over the increase caused by the heated photospheric layers.

We have use a unique dataset obtained by the Hinode satellite capturing the X9.3-class WLF ribbon with a spectropolarimetric raster scan, as described in detail in Ref. [2]. The observed Stokes profiles allow us to interpret the temperature stratification of the solar photosphere during this WLF. Also, we argue that contrary to the formation of the Fe I lines, the continuum brightening originates in different, upper layers of the heated atmosphere.

[1] "The art of Stokes inversions"

[2] "Heating of the solar photosphere during a white-light flare"

Retrieved from "http://sprg.ssl.berkeley.edu/~tohban/wiki/index.php/Heating_of_the_solar_photosphere_during_a_white-light_flare"
Category: Nugget
Facts about Heating of the solar photosphere during a white-light flareRDF feed