The RHESSI flare list is created during quicklook processing (and is often re-processed). It is distributed with the software and the flare list files can be found in the directory $ssw/hessi/dbase. Both FITS (hessi_flare_list_yyyymm.fits) and text files are available. The full list includes many events which are not necessarily of solar origin.

The time range is 1 orbit, starting and ending in SC night. Note that most parameters are changeable via keyword (mostly true; it seems that min, max of 8.0, 300.0 seconds are hardcoded for imaging interval tests).

4) Use HSI_ALT_THRESHOLD to get threshold values for "possibly solar". This currently defaults to use front_ratio, the front to total counts ratio, the alt threshold is the lowest flat nonzero background level (using hsi_obs_bck0) plus 3.0*sigma. Post 2016 anneal, the MOD_VARIANCE (variance in count rates for detector 8 is used instead.

5) Find and flag nonzero count rates, no gap or SAA flags are allowed. If there is no good data, return.

6) Save corrected unsmoothed rates for output.

9) Rates are smoothed after threshold calculation. Smoothing is done over 15 points (1 minute).

10) Count rates during eclipse are now set to zero. 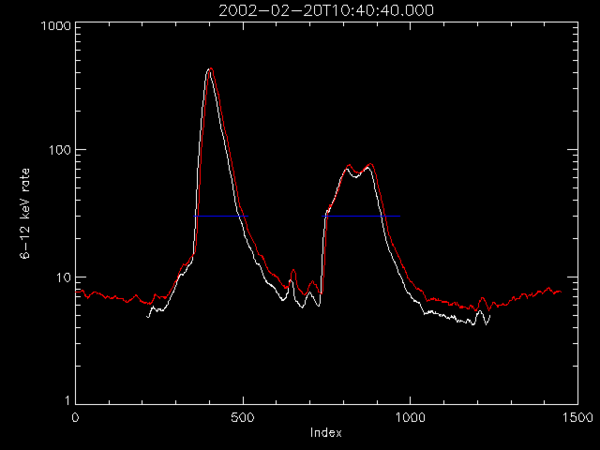 Figure 1:Here is a sample of the results of the EXCESS_INTERVALS calculation for a familiar orbit from 2002-02-20; the white line is the count rate from 6 to 12 keV, the red line is the threshold rate. The blue lines show the flare time intervals. 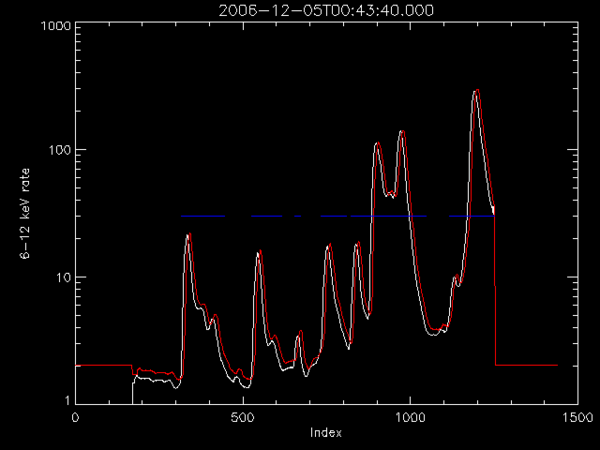 Figure 2:Here is a sample of the results for an orbit from 2006-12-05; the white line is the count rate from 6 to 12 keV, and the red line again shows the threshold level. The blue lines show the flare time intervals. The first, second, fifth, and sixth intervals have multiple peaks, and may possibly be split up.

12) Back in HSI_FLARE_LIST_FILL, if events were found, then loop over each one. For each event:

a) events with data gaps longer than 5 minutes are split.

b) events which have multiple peaks are split using TEMP_SPLIT_FLARE. Here splitting occurs unless:

b1) the minimum value between peaks does not drop to less than 1/2 the value of the 1st peak excess count rate. AND

b2) the minimum is not "flat";i.e. there is not a 5 minute period around the minimum where the count rate varies by less than 10%. AND

b3) the minimum value for excess counts does not drop to a value below twice the threshold value. (This helps for small flares.)

Note that here excess counts refers to counts - threshold value (background plus 3*sigma). Also the count rate gets extra smoothing (31 points, 124 seconds) before peak-finding. This is shown in the next Figure,the extrasmoothing has removed some smaller peaks, so only one of the intervals is split. 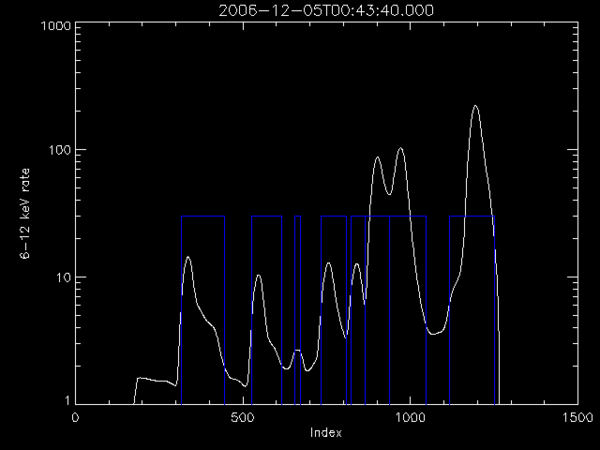 Figure 2b:Here is a sample of the results of the TEMP_SPLIT_FLARE calculation for a flare on 2006-12-05; the white line is the count rate from 6 to 12 keV. The blue lines show the flare time intervals. The fifth interval has now been split into three separate contiguous intervals.

a) check for duration, flares must be at least 12 seconds.

b) check max_det_vs_tot flag, if the rate in the front detector with the most counts is more than 50% of the total, then this one is thrown out.

c) Uncorrected peak count rate must be greater than 5.0 cps/detector.

15) If there are still events, then call EXCESS_INTERVALS again, this time for each energy channel, to get possible intervals for higher energies.

16) For each flare, check to decide if its solar:

a) If the front_ratio is greater than the alt_threshold (see step 4) OR the variance in the count rate due to modulation in channel ch0 (6-12 keV) is 1.5 times that expected from poisson, then we continue. If not then this one is tagged "non-solar".

b) Use HSI_OK_INTV to find "good" intervals for imaging. Intervals may be as long as 300.0 sec, or as short as 8.0. (As noted before, the 300 and 8 are hard coded, probably sometime in the future these will be changeable parameters.)

c) Use HSI_XY_TEST_NEW to check for valid position. This finds flare position, using HSI_LOCATE_FLARE, which compares the peak brightness position for different detectors. Each possible "good" interval, starting with the one closest to the flare peak, is tested until it gets a result. Or not -- if it fails on all intervals, this one is flagged "possible solar". If a valid position is found, the flare is finally flagged as "solar".

d) If we do get a position, then we test position for each energy band. This uses HSI_XY_TEST_NEW, /VERIFY, which returns a valid posiiton if the position value is close (within an arcminute) to the 6-12 position. The highest energy channel that succeeds is put in the energy_hi field of the flare list data structure.

17) The final step is to fill the bck_rate, bck_rate_time fields in the output structure. Tags are filled with the background rate (from the corrected rates) and time interval (1 minute before each flare).

Results are passed back to the calling routine, HSI_FLARE_LIST::FILL in an anonymous structure, here the rest of the flarelistdata structure is filled.

1) Peak and total count rates are calculated for the 6 to 12 keV channel.

3) Flare flags are filled in hsi_flare_flag_fill.pro

6) alt_id (just time2file for the flare start) is assigned. (This will change soon to use a new IAU naming convention).

7) HSI_FLARELIST2GOES assigns GOES events, if there is one for the given time range. It also finds the value of the GOES flux at the flare peak, to give an idea of flare size for small flares without corresponding GOES flares.

8) HSI_FLARELIST2AR assigns the closest active region. (Position is compared to position found at the start of the day from NAR files).

9) The OBS_SUMMARY object for the object is updated with flare flags.

HSI_DO_QLOOK_IMAGE for images and spectra:

The flare list is also changed in the program HSI_DO_QLOOK_IMAGE, which is run in a separate cronjob.

HSI_DO_QLOOK_IMAGE handles both images and spectra. (This is done to cut down on the number of cronjobs). For each flare, images are done for each energy band for which a valid position was found, up to the 300 to 800 keV band. The image pixel size is 3 arcsecond, with 64x64 pixels, and the time range is the one used to find the flare position. This time range is typically a 5 minute range at the flare peak in the given energy channel.

Spectra are calculated at approximately 1 minute time resolution, depending on attenuator state changes. The energy bands start out as 1 keV resolution from 3 to 10 keV then increasing by 10% for each succeeding energy channel. Background levels are calculated using the program HSI_NEW_SPEC_BCK, which uses a database of background level versus SC position calculated during spacecraft night. Next the detector response matrix is inverted (HSI_INVERT_SPECTRUM) to obtain a photon flux spectrum for the energy range > 6 keV. This is used to get the peak, total and e-folding photon flux. These flux values are appended to the flare list data structure. Note that the background levels used for this procedure are less than reliable for times after 2006, when radiation damage began to affect detectors. We're working on a better time-dependent background calculation.