We have many examples now of contracting motions at or before the impulsive phase of a solar flare (see, for example, Ref. [1], for one of the first reports, and an earlier Nugget.) Such an implosion is consistent with the idea of conservation of energy, since flare structures are basically volumes of almost pure magnetism (the plasma beta in the preflare corona is very low), and this implies that the energy storage can be represented by the volume integral of B2 as a first approximation. So, to release energy, the volume must shrink at the same time - hence a magnetic implosion. The magnetic structure of a flare also can support oscillatory motions, and these can be excited as a simple mechanical response to the implosion. Another earlier Nugget reports such pulsations detectable even at gamma-ray energies.

This Nugget reports a particularly clear example of implosion and oscillation in flare SOL2012-03-09 (M6.4), observed well by many observatories (including RHESSI, of course). This flare revealed new characteristics of the development of the implosion, and of the nature of the resulting oscillations. We take the opportunity below to speculate a little on the consequences of these newly found properties.

Figure 1 gives an overview of the flare as an image and as a "time-slice" plot of position vs time along a selected line. The latter shows the major features of the time development of the flare. The appearances are consistent with an early slow inflation, a sudden implosion, the coronal dimming resulting from the launch of the CME, the excitation of oscillations in the visible loop structures, and finally the damping-out of these oscillations. A movie shows all of these features well.

Note that the clearest oscillatory features occur on rather large spatial scales, and show parts of the corona that do not get blown away by the CME motions; this means that they occupy different volumes of the full 3D structure, suggesting that the motions detected are not uniformly radial as the cartoons often imply. Note also that the onsets of the oscillatory motions lag at greater distances. This is an important finding because it implies that the excitation arises in the core of the flare, and the wave of excitation propagates outwards with a (projected) speed estimated at about 300 km/s. Figure~2 shows the close relationship in time between the implosion and the dimming. 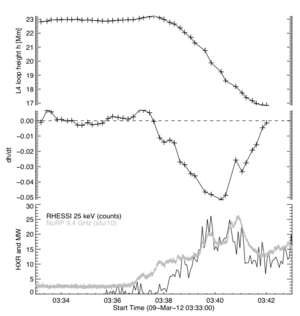 Figure 2: Timing of the contraction of coronal loops and flare emission (top), and the rate of change dh/dt (middle), compared to the impulsive phase observed in hard X-rays by RHESSI, and at 9.4 GHz in the radio microwave spectrum by the Nobeyama Solar Radio Observatory..

It would be natural to think of the speed of the excitation wave as a reflection of the local Alfvén speed, and hence conveying some information about the local physical properties (magnetic field and plasma density). But we are interested here mainly in the global dynamics of the phenomena. One item of interest lies in the distribution of eigenmodes (normal modes) of the postflare structure. Because the periods of the oscillations vary with position, we might imagine that the eigenmodes have a lot of complex properties, a reasonable expectation for a system that is entirely unknown to us below a certain spatial scale. On the other hand the whole structure obviously needs to evolve in time as the corona tries to find its new equilibrium state following the event, and so the physical parameters (such as the plasma density) will have time variations. In this sense it may be inappropriate to think of the oscillations as eigenstates of a static structure, or even ones that evolve adiabatically. The theory does not appear to be in place yet.

The oscillating structures described above all lie far from the source of flare energy, which our analysis of exciter motion confirms as the strong-field regions of the low corona. We have also found pulsations in the GOES soft X-ray time series, though and these reflect the higher-temperature regions at the core of the event. Figure~3 shows the evidence for this, obtained most clearly by looking at the time derivative of the actual soft X-ray fluxes. 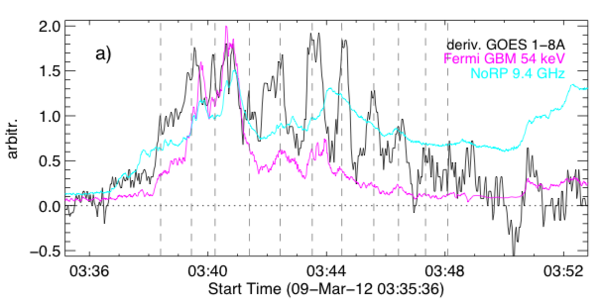 Figure 3: The time derivative of the GOES soft X-ray signal, plus hard X-rays from the Fermi gamma-ray and radio waves from the Nobeyama radio observatory.

The presence of these GOES pulsations, previously noted with in other flares, suggests oscillatory structural motions in the core of the active region (high temperatures, strong magnetic fields, high Alfvén speeds) even though the spatial resolution of our soft X-ray observations is not good enough yet to follow them. The presence of these perturbations is consistent with our interpretation of this region as the source of the pre-flare energy storage and as the origin of the excitation wave resulting in the dimming and oscillation seen at higher altitudes.

As a speculation, because we are unaware of any theoretical work on this subject, we suggest that these GOES oscillations actually store energy from the initial energy-releasing implosion. Such behavior would be consistent with the presence of the large (Alfvénic) Poynting flux needed to rearrange the magnetic structure in the first place. This energy could then prolong the impulsive phase of the flare, which definitely does not look like an impulse-response excitation; in this case the non-thermal activity (hard X-rays and microwaves) continue for many minutes. Some of this energy could be derived from the damping of the oscillatory structures.

We have shown a very nice example of implosion and oscillation in the flare/CME SOL2012-03-09 (M6.4), and note that it is far from unique in showing these phenomena. Indeed flares and CMEs generally, by consensus, derive their energy from coronal magnetic energy storage, and so this behavior - though hard to analyze systematically in quantitative detail, and hence tending to be a piecework effort in each flare reported - may be quite typical.