RHESSI (Ref. 1) has been performing high-quality X-ray and gamma-ray solar measurements from 3 keV - 17 MeV with a best energy resolution of order 1 keV FWHM over the range from 3 to >100 keV. It has measured well over 100,000 solar flares since its launch in 2002, and has proven to be a reliable NASA Small Explorer Mission (SMEX). But to achieve this wide spectral range - including hard-to-detect gamma rays - RHESSI had to compromise in some ways. In particular, there are systematic response limitations below about 6 keV. The Miniature X-ray Solar Spectrometer (MinXSS) CubeSat (ref. [2]) is designed to thrive in this spectral region. MinXSS thus nicely complements RHESSI's observations of solar flares with higher-resolution spectral coverage from ~1 to >15 keV. 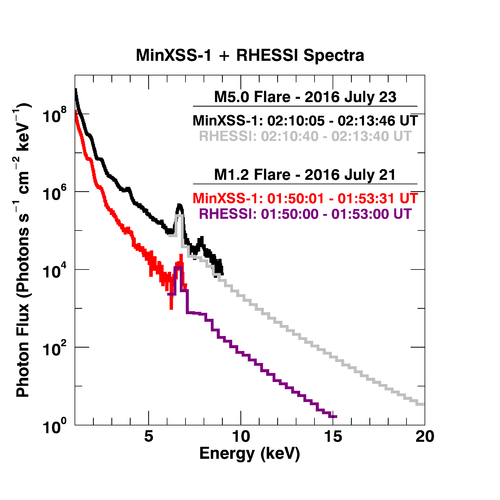 The near-simultaneous measurements shown in Figure 1 provide complete spectral coverage from 1 keV to the minimum detected flux from RHESSI and spans eight orders of magnitude in photon flux. The main overlap between the two instruments for flares is near the most prominent peak at 6.7 keV from the complex of lines from highly ionized iron near that energy. Note the presence of other significant spectral line features in the low-energy (MinXSS) spectral range.

This comparison of X-ray spectra for two solar flares measured simultaneously with both RHESSI and MinXSS-1 helps validate the MinXSS observations.

The combined MinXSS and RHESSI X-ray spectral measurements open up new parameter space and context to understanding solar flare processes, evolution, and abundance variations. The effective spectral resolution of the MinXSS-1 X-ray spectrometer (X123) is roughly 0.240 keV across the whole 0.8-12 keV bandpass, and this allows for improved emission-line diagnostics. The consistency in the spectral shape between the RHESSI and MinXSS simultaneous observations affirms the quality of the MinXSS data. Cross-calibration between the two instruments will be conducted in the near future to quantify and understand the differences in the spectra. MinXSS spectra can be used to infer flare plasma temperature, emission measure, thermal energy, and elemental abundances during the flare (see the MinXSS Nuggets for a discussion of elemental abundances). RHESSI's imaging spectroscopy capability provides flare spatial information in addition to non-thermal accelerated electron energy spectra, thermal energy, plasma temperature, and emission measure. Future temporal analysis following the electron beam thick-target model can map the non-thermal accelerated electron distribution during early phases of the flare as deduced from RHESSI data to the thermal evolution and abundance variations in the later phases of the flare deduced from both MinXSS and RHESSI observations.