The microwave spectrum, observable by radio observatories, has a close relationship with the X-ray spectrum. Typically one sees bursts in both spectral bands, but - rarely - one sees negative bursts in the microwaves. Such bursts were described in the 1950s by the eminent radio astronomer Arthur Covington, who also introduced the much-used F10.7 radio index of solar activity. The negative bursts are in a sense easy to understand - the whole Sun emits microwave radiation from near the base of the corona, and so a relatively cool and absorbing coronal feature - for example, a prominence - may obscure parts of this emission. Indeed, Covington had also used the Moon (via an eclipse observed in Ottawa, in 1946!) as an absorber to show that solar radio emission was concentrated spatially in sunspot regions and to establish the importance of magnetism in solar activity.

The physics of negative microwave bursts may not be simple, and therefore many things may be learned about the behavior of the solar corona by observing it with modern equipment. This includes not only the microwave domain, but also the EUV as currently observed, for example, via the Solar Dynamics Observatory (SDO) among others. We have now begun further studies of these phenomena, as introduced in Ref. [1].

Negative microwave bursts sometimes accompany solar flares, but that is not always the case. Sometimes coronal activity can result in sudden absorptions in the absence of an obvious flare or CME; we show examples of non-flare (left) and flare (right) negative bursts in Figure 1. The non-flare case may be an example of a "Hyder flare", as originally described by the remarkable solar physicist Charlie Hyder. The SDO movies of the latter make the possible utility of microwave absorption quite obvious! In the quiet-Sun case on the left, the dip at long wavelengths at about 01:10 UT corresponds to dimming seen at 304 A, due to the Lyman-alpha line of hydrogen-like helium, He II. This clearly implicates relatively cool material embedded in the otherwise hot corona. The dimming for the major flare event (right panel) may also involve this phenomenon, as well as the effects of the CME eruption associated with this very powerful flare. 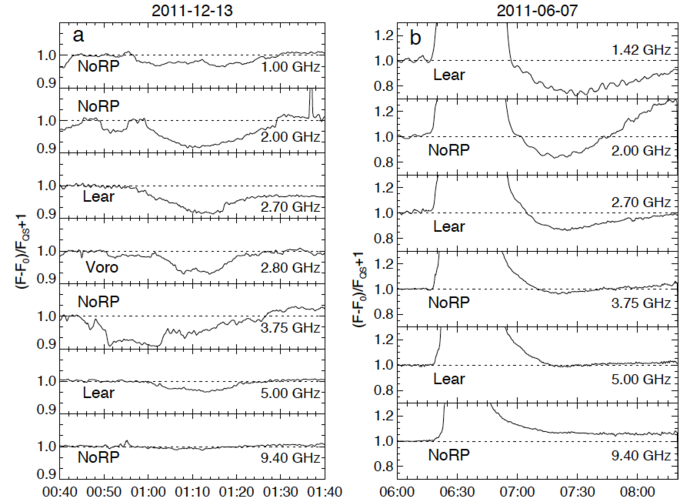 Figure 1: Left, a microwave negative burst not obviously associated with a flare; right, that observed during the huge event SOL2011-06-07. The movies in this link illustrate how clouds of material move through the corona, often obscuring sources at lower altitude.

The radio observatories involved in the observations of Figure 1 are in Australia (Lear), Japan (NoRP), and Russia (Voro), and one can clearly see the wavelength dependence (the free-free opacity increases as the square of the wavelength). One of the most exciting prospects here is that the radio data can be calibrated very precisely, and that there are radio images with much higher spatial resolution than heretofore available. Thus a multi-wavelength analysis of radio, white light, EUV, and X-ray signatures will obviously enrich our knowledge of the physics involved in the negative-burst phenomena.

In the event shown in Figure 2, we can see the absorbing cloud in the NoRP microwave observations as it moves across the visible face of the Sun, and we can track it as well with EUV and classical H-alpha observations. This event resulted in a diminution of about 12% in the 1-3 GHz range, and we have termed it an "anomalous" negative event because of the time development of the absorber. We apply the term “anomalous” to an eruption in the sense that instead of a “normal” expansion of an eruptive filament, we see its apparent “disintegration” into myriads of fragments constituting a slowly descending “cloud.” The recognition of such events as a separate class is new, and the behavior of the coronal plasma following a disintegration - as nicely seen in the movies - surprised the community. In particular we would like to understand better how the EUV/X-ray and radio dimmings are related. 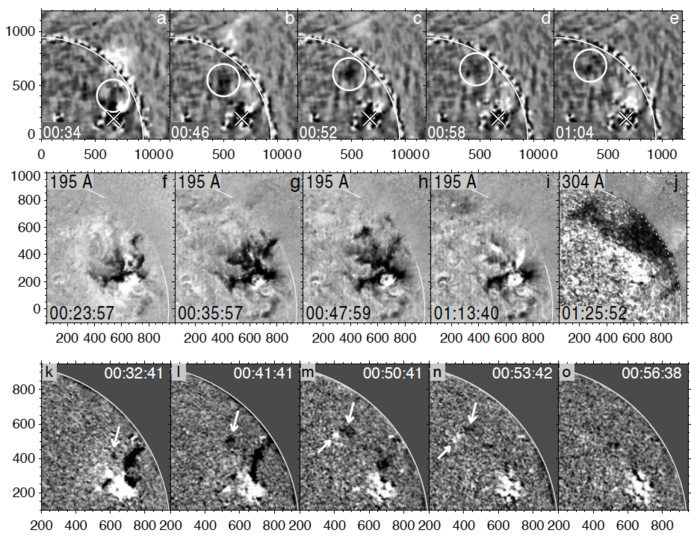 The behavior of a larger-scale stellar corona during episodes of magnetic activity generally has broad significance, since stars more remote than the Sun also show signatures of "negative emission" phenomena even though we can't resolve their geometrical structures spatially. These typically appear at visible-IR wavelengths, though, rather than in microwaves, and their appearance has spawned ideas that one does not frequently meet in the solar domain. Ref. [2] shows a particularly good example of this - do solar paradigms apply to the stellar phenomena, or (contrariwise) do stellar paradigms apply to the solar case?

Examples of negative microwave bursts have been known for decades (e.g., Ref. [3]), but now we can exploit the physics involved with far better tools. These extend into the EUV and X-ray wavelength ranges, but the radio spectrum will always make a unique contribution to deciphering the processes involved. In the radio domain we now have both imaging and the prospect of imaging spectroscopy, and the examples shown here at fixed frequencies offer only a first taste of what can be observed. At a minimum, the interpretation of these solar events needs to bear in mind paradigms arising from possibly analogous phenomena observed on more active stars.

This Nugget is based on the research described in Ref. [1], by Irina Kuzmenko, Arkadiy Uralov, Ilya Chertok and the lead author here.

[1] "Absorption Phenomena and a Probable Blast Wave in the 13 July 2004 Eruptive Event";

[2] "A preflare diminution in the quiescent flux of EQ Pegasi"