Non-radial jets on the edges of active regions

Across the entire solar disk jets of hot plasma are routinely observed in EUV and X-rays. It is generally accepted that these coronal jets form through explosive magnetic reconnection low in the corona. However, it still debated as to how this energy release occurs and even whether jets from different regions are similar in physical nature.

The most energetic jets occur at the edges of active regions where the magnetic field strengths are higher and hence the energy capable of being stored is greater. These active-region periphery (ARP) jets are launched non-radially, following the magnetic field away from the active region that they neighbour. If the active region is bordered by a coronal hole they can escape into interplanetary space, such as in the example shown in Figure 1a. Since these jets are especially powerful, they produce sizeable jet-like CMEs alongside impulsive energetic particle events, making them much more impactful to the heliosphere than your average polar coronal-hole jet.

Figure 1: (a) A non-radial ARP jet is launched into a low-latitude coronal hole. The jet forms above a cluster of negative (minority) polarity magnetic field patches. (b) A toy magnetic field model showing the two types of magnetic field structures that are present where these jets are launched.

The insets in Figure 1(b) show toy magnetic field models of the two magnetic structures found in extrapolations at the base of ARP jets. A small locally opposite (minority) polarity magnetic field region on the solar surface is surrounded by a circular (green) neutral line in each. Depending on the properties of the region, the closed field that connects to the minority polarity is divided off from the surrounding open field by field lines originating at a null point or a bald patch. Free magnetic energy is stored in the closed-field region that is explosively released by reconnection at these structures to produce jets. But how, exactly?

Observations suggest that the free magnetic energy is stored in the form of highly sheared magnetic field lines (filament channels), similar in nature but much smaller than the structures that erupt to produce coronal mass ejections and flares [Ref. 1]. Like CMEs and flares, these small-scale filament channels must somehow become unstable to generate the jet and its associated energy release.

This Nugget describes a new MHD simulation aimed at understanding this [Ref. 2]. Figure 2(a) shows the initial magnetic field in the simulation, which contains a "bald patch" (a concave-up region of photospheric magnetic field) and is similar to the fields obtained from extrapolations. This field is current-free so has no free magnetic energy initially. Free magnetic energy is injected into the closed field using slow surface shear motions designed to form a filament channel along the right-most section of the green neutral line, where filament channels are observed to form (Figure 2(b)). 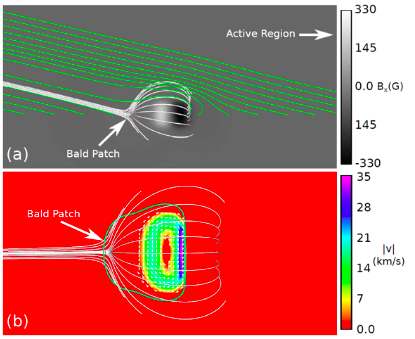 Figure 2: Setup for the MHD simulation. (a) The initial magnetic field, with a bald patch. (b) The surface motions used to shear the closed field, storing energy in the form of a filament channel.

This simulation along with additional test runs revealed that a chain reaction of reconnection and field line contortions are necessary to produce a jet in this configuration. Early-on reconnection forms a null that replaces the bald patch and starts off the chain. A feedback then sets in between the expansion of the filament channel and the null reconnection, analogous to how "breakout reconnection" occurs in CMEs. A second current layer then forms in the filament channel that creates a flux rope. Eventually enough turns of twist are added to the flux rope that it becomes unstable to the kink instability and rapidly rises and rotates, dramatically speeding up the breakout reconnection. Finally, a helical jet is produced when the flux rope reaches the null and is itself reconnected, transferring some of its twist.

Figure 3 shows the flux rope (in yellow) not long after it forms (a), the opening of nearby cyan field lines from breakout reconnection (b), when the flux rope kinks and rises rapidly (c) and the twisted field lines within the jet (d).

Figure 3: Field lines showing the eruption of the flux rope formed from the filament channel, and its transfer of twist which forms the jet.

This simulation study follows on from our previous work studying jets involving small-scale filament channels in the quiet sun and coronal holes [Refs. 3,4]. In those studies, we found a similar evolution although without a clear indication of a flux-rope instability. In this study the kink instability appears to be a necessary ingredient to get the eruption process over the line. However, the general picture across all our simulations is that the coupling between breakout reconnection and the flux rope's rise/instability leads to the eventual reconnection of the flux rope and transfer of its twist, producing a jet. Our results therefore suggest that helical ARP jets are fundamentally the same in nature as coronal-hole and quiet-Sun jets.

For eruptions more generally, we suspect that this rather generic picture of breakout reconnection coupling to a flux rope rise/instability could well be at the heart of more than certain jets and CMEs. It will be fascinating in future to see what other eruptive events can be understood in this manner.

[2] "A universal model for solar eruptions"

[3] "A Breakout Model for Solar Coronal Jets with Filaments"

Retrieved from "https://sprg.ssl.berkeley.edu/~tohban/wiki/index.php/Non-radial_jets_on_the_edges_of_active_regions"
Category: Nugget
Facts about Non-radial jets on the edges of active regionsRDF feed