We normally describe the hard X-ray continuum spectrum of a solar flare solely in terms of bremsstrahlung. For non-thermal electron distributions, this is non-thermal bremsstrahlung (NTB). A quite different different physical process can also contribute: direct free-bound interactions of electrons with ions. Falling to a given atomic level in an ion, an electron emits a photon with the sum of its kinetic energy and the binding energy of that level, so that this continuum component contains a well-defined minimum energy, a sharp lower edge. While well known for thermal distributions, the analogous free-bound emission from a non-thermal electron distribution, which we term non-thermal recombination (NTR) here, has had almost no recognition in the literature. The recombination can also excite further bound-bound (line) emissions. For completeness, the hard X-ray spectrum as seen by RHESSI can include bound-bound atomic transitions and some nuclear reactions as well.

The free-bound emission due to recombination of non-thermal electrons onto ambient ions is usually dismissed in the fitting of spectra because ``thermal emission dominates at the relevant photon energies. While it's true that the thermal component of the spectrum is usually stronger than non-thermal emissions at small photon energies, spectral inversion to derive the electron spectrum (or DEM) depends on derivatives of the photon spectrum, and therefore sharp recombination edges can cause significant errors in the inferred electron distribution [1].

Observations of flares by RHESSI and many previous instruments routinely imply large numbers of electrons accelerated to high energies. Collisions of these electrons with ambient ions produce strong non-thermal bremsstrahlung, which often extends to energies of 100 keV or more. Accelerated electrons also recombine with those ions, producing soft(er) X-ray recombination continuum radiation with sharp spectral edges. See Ref. [1] for a first detailed analysis of this process, in both the thin- and thick-target regimes, using the Kramers cross-section approximations (Ref. [2] provided minor atomic corrections). In our recent work [3], we correct an error in the derivation of the thick-target case. We also give a simple scaling law to estimate the importance of NTR as a function of the electron beam parameters (cut-off energy E0c and spectral index δ) and the plasma temperature T:

Although generally small, NTR can exceed NTB at small photon energies for low cut-off energies and/or high spectral indices (both scale linearly with the electron rate so their ratio is independent of it). In Figure 1, we show a synthesized spectrum to illustrate this, where NTR exceeds NTB by a factor of 3 at its peak. In fact, for larger spectral indices or smaller cut-offs, this ratio can grow extremely large so that NTR is truly dominant in those extreme cases. 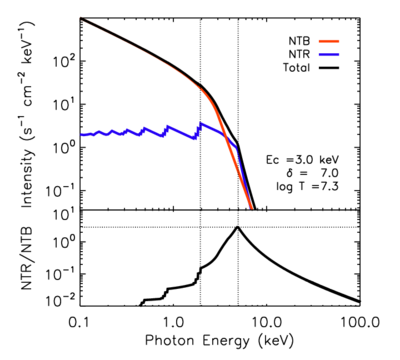 Figure 1: Synthesized photon spectrum to illustrate the importance of NTR. For a cut-off of 3 keV and spectral index of 7, NTR exceeds NTB by a factor of 3 at its maximum, primarily due to recombination of Fe XXV.

For the same case as above, if one were to fit the photon spectrum assuming that it were produced solely by NTB, there would be substantial errors in the best fit electron distribution inferred. Figure 2 shows that fit, with energy now binned more realistically for RHESSI. We also show the inferred electron spectrum, compared to the true one. The cut-off and spectral index are both over-estimated, while the electron rate is over-estimated below 12 keV (by a factor of about 3 at its maximum) and under-estimated above 12 keV.

Figure 2: Left, the same spectrum fit assuming only NTB contributed to the emission. right, the inferred electron distribution attained from the fit. The cut-off, spectral index, and electron rate are all over-estimated compared to the true values..

The conclusion is simple: spectral fitting and inversion of X-ray spectra should include NTR. The process contributes to the X-ray emissions, although it is usually relatively small compared to NTB. It is especially important for microflares with small cut-offs and/or large spectral indices, and for cold flares where the temperature is low or volumes with small thermal emission measure so that thermal emissions, including lines, are small enough not to dominate. Electron distributions inferred by NTB inversions involve derivatives of the photon spectrum, so that ignoring the presence of NTR recombination edges can lead to very large errors.