Quiescent filaments can lie outside solar active regions, and are often much longer than the diameter of a typical active region. Despite their name, many erupt and can be associated with a fast coronal mass ejection (CME). When they interact with Earth, these fast CMEs can excite major geomagnetic storms. Obtaining an understanding of the connection between quiescent filament eruptions and flares, CMEs, and filament eruptions from active regions is important to understanding the origin of [solar magnetic activity] and space weather.

The "Canyon of Fire" Eruption

An impressive quiescent filament eruption originated from the northwestern quadrant of the sun on September 29, 2013. This eruption, associated with a fast CME that did impact Earth, received considerable media attention and was nicknamed the "Canyon of Fire". The X-ray detectors aboard the GOES weather satellites registered a weak, C-level flare during the period of the eruption. These X-ray photometers provide no information about the source location of the X-ray emission, but the GOES soft X-ray imager confirmed the origin of the X-ray burst to be, indeed, in the quiet Sun at the location of the erupting filament.

An examination of RHESSI light curves shows that RHESSI also observed emission at the time of the GOES flare at X-ray energies, but at energies up to 12 keV. The location of the RHESSI emission is shown in Figure 1. Contours of 3-9 keV emission observed by RHESSI at the time of the GOES peak emission are superimposed on an image in the 304Å band of the Atmospheric Imaging Assembly (AIA) on the Solar Dynamics Observatory (SDO). 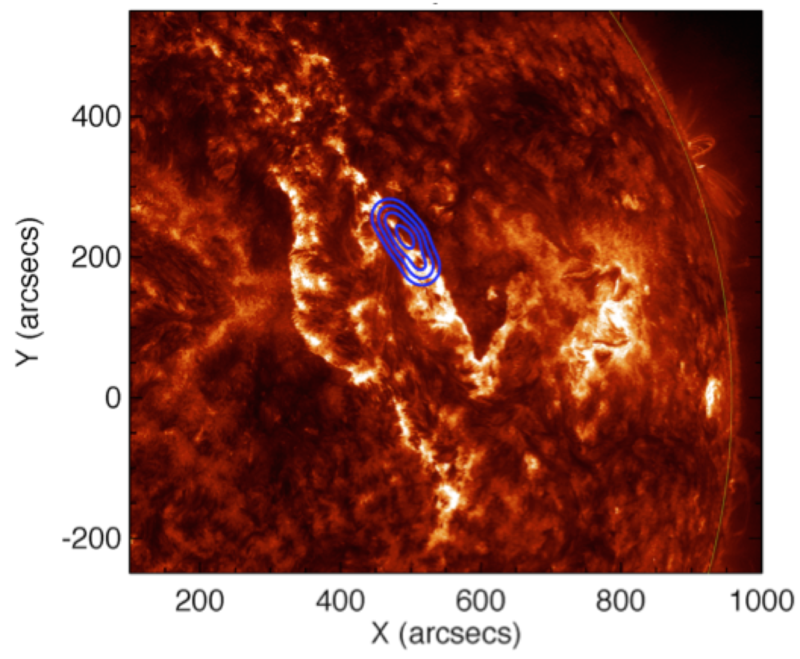 The AIA image shows two bright ribbons that formed below the original location of the filament and gradually spread apart as the filament erupted, a pattern of evolution typical of two-ribbon flares (Ref. [1]). The RHESSI source is located along part of the western ribbon. It followed the westward movement of the ribbon and also moved somewhat along its length, toward the north. There is an active region to the west of the southern end of the ribbons, but the RHESSI source is clearly associated with the ribbon of the erupted quiescent filament, not the active region. Why is the RHESSI source located along only a small fraction of the extended ribbon? The answer appears to be a small dipolar region that emerged earlier in the day before the start of the filament eruption. It emerged below the filament at about the solar latitude where the RHESSI source is later observed. The dipole field builds to a strength exceeding 1,000 Gauss. This field strength slowly decays during the filament eruption and decays more rapidly during the flare. Magnetic reconnection of the dipolar field with the field of the filament arcade was likely the driver of enhanced local plasma heating responsible for the thermal bremsstrahlung emission from the hot plasma observed by RHESSI. Emerging flux regions such as this small dipole are frequently associated with quiescent filament eruptions and may be involved in triggering the eruption (Ref. [2]). The observations and their interpretation are described in Ref. [3]. Additional associations of RHESSI X-ray emission with quiescent filament eruptions have been identified. Analysis of these events will provide valuable insights into the origin and evolution of quiescent filament eruptions and solar eruptive events in general.

The event described in this Nugget reveals the presence of intense energy release even in the quiet Sun, in the form of an otherwise innocuous-looking quiescent filament. The power of the the CME that resulted, and its interplanetary development, do not have the same kind of associations with a solar flare as in an active-region event. Nevertheless high temperatures and non-thermal effects result, and hard X-ray observations such as those of RHESSI (or more sensitive ones) can diagnose them.