Solar eclipses have always provided an interesting avenue for solar research; the coincidence of observed lunar and solar diameters, as seen from Earth, makes our local "double planet" an almost perfect natural coronagraph. This Nugget explores some of the possibilities for the next total eclipse, that of 2015 March 20. According to this interactive graphic from NASA, one can see that totality only intersects the minor landmasses of the Faeroe Islands and Svalbard, both regions of extreme natural beauty but also occasional bad weather.

The scientific virtues of an eclipse are many. First, the eclipse suppresses the bright disk of the Sun, thus vastly improving views of the corona itself. Second, in special circumstances the "knife-edge" (actually, more like a "saw-edge" because of [lunar mountains] can scan a solar feature and give otherwise unavailable information about fine spatial structure. Only Diffraction and signal-to-noise ratio limit this capability in principle.

What can the knife-edge occultation do for us scientifically? Firstly we note that the lunar mountains are sub-arcsecond, and so not so important, so indeed for most wavelengths the knife-edge is sharp. Secondly, the occultation by the lunar disc allows analysis of coronal features normally obscured due to the brightness of the solar disc, for example the position of the limb at different wavelengths (Refs. [2] and [3]). Thirdly, given enough signal-to-noise ratio, one can differentiate the 3D data cube of an imager (variables x, y, and t) and thereby produce a 2D data cube (z, t) where "z" represents the brightness of the strip just between two successive steps of the image cadence. The slice scans across the Sun as the eclipse proceeds. Since the 1999 eclipse lasted about 150 seconds, and the Sun is about 2000 arc sec in diameter, the image moves no faster than about 15 arc s per second. If the observations could provide a SNR of (say) 10 at 1-sec cadence, one could image in one dimension at 10 arc sec true resolution (depending on the geometry).

This well-observed eclipse provided really interesting data in the X-ray range (from Yohkoh; see the resulting Yohkoh Science Nugget for a description. The X-ray observations (as with RHESSI) have the additional wrinkle of rapid satellite motion, as explained in that Nugget and its links.

At the other end of the spectrum, the meter wavelengths in the radio domain, the same eclipse as observed from the Nançay Radioheliograph produced the remarkable data shown (in two wavelengths) in Figure 1 [1]. 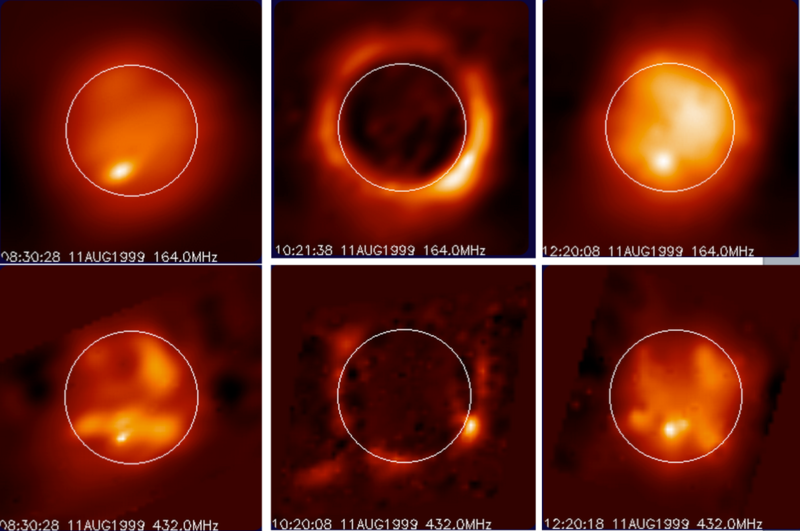 Fig. 1: Two image sets from Nançay at 164 MHz (top) and 432 MHz (bottom), showing snapshots before, during, and after totality. Note the strikingly different and far better view of the corona during the eclipse. Also note the presence of stable structures that could be analyzed by the knife-edge technique.

The eclipse of 2015 March 20 provides an opportunity for many kinds of scientific observations that do not depend so much on having clear skies, ie radio/X-ray/EUV etc.; we would like to encourage the use of all possible observatories to take advantage of this rare opportunity. The eclipse at existing ground-based radio observatories will be partial, and so with correspondingly limited suppression of the radio disk. At the LOFAR site in Groningen, for example, the optical-disk coverage will not exceed 80%.

The e-Callisto network has many nodes throughout Europe; these will have varying degrees of coverage but good time resolution. For non-imaging observations of this kind the knife-edge imaging technique will only produce a 1D image at the position angle of the occulter (the limb of the Moon), rather than a full 2D image with excellent resolution perpendicular to that direction.

And what solar physics can we get at? As the 1999 data in Figure 1 suggest, we get a very different view of the solar corona at these wavelengths when we are more free of the unwanted image noise due to sources on the disk. At a minimum, such data automatically provide the cleanest images of the quiet corona.

As for the knife-edge imaging, compact and time-variable radio sources typically include unresolved structures, especially at longer wavelengths. We do not think that these methods have been applied at meter wavelengths, but have in the past met with good success at cm wavelengths (Refs. [2], [3]). The knife-edge technique described here was also shown to work for [Yohkoh soft X-ray data as well; in all wavelengths the Moon serves well as an opaque occulter.

The eclipse of 2015 March 20 will happen very soon, and it has potential scientific applications thanks to all of the new observational facilities available in space and on the ground Unfortunately RHESSI itself will miss the action this time due to unfavorable orbital position. Other spacecraft may or may not take advantage of the situation. At the time of writing, the Sun is active, but it is hard to predict its state in ten days' time.

[1] "Radio observations of the Sun at Nançay"

[2] "High resolution interferometric observations of the solar limb at 4.9 and 10.7 GHz during the solar eclipse of October, 1977"