Flares and other forms of violent solar magnetic activity represent RHESSI's main target, and accordingly we watch solar activity quite closely. In the most recent Nugget on this subject, we had announced the return of sunspots at the beginning of Cycle 24 in November 8, 2010. Now we are watching activity as it decreases, just about half of an 11-year cycle later. It's pretty clear, incidentally, that NASA's expectation that Cycle 24 would be a major one was quite erroneous. Now we're approaching the end of the sunspot maximum, as announced by the occurrence of many days in June, 2016, with no spots at all (Figure 1). The sunspot number has reached its zero level. 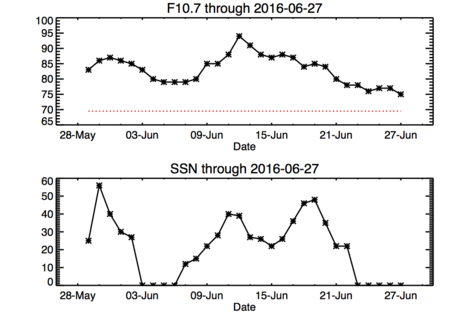 The comparison in the figure shows how much better-behaved the 10-cm solar radio flux index F10.7 actually is at times of low activity. The red line in the upper panel shows an estimate of the base level typical of true solar minimum, as in 2008, for example. Clearly this index has not gotten there yet, but the sunspot number has. For higher levels of activity these indices correlate quite well, but because of the digital nature of the sunspot number (no fractional spots are possible) the sampling error is very large, relatively speaking, at the bottom of the scale.

When do spotless conditions tend to occur? The graph in Figure 2 extends the time series back to the beginning of Cycle 23, marking the spotless days in red. In this cycle, one spotless day sneaked into the picture in April, 2014, but this month (June, 2016) has seen the first persistent spotless state. The analogous time in Cycle 23 might have been about October 24, 2005, some 11 years prior to the time of writing; from this point of view the duration of the minimum-to-minimum is exactly typical.

Figure 2 also illustrates the point again about the imprecision of the sunspot number at minimum; one can clearly see that an average of some sort would have to cross the obvious gap between the zero and one levels in some smooth sort of way - fractional spots. It is remarkable that solar magnetic activity actually does not seem to care whether or not sunspots form, suggesting strongly that these beautiful things are just blemishes on the surface of the Sun, fascinating for many reasons but not at all representing the action of the solar dynamo that we imagine to pulse powerfully away in the deep solar interior. Even without spots, we can have flares, as illustrated by the RHESSI observations in Figure 3 (abstracted from the RHESSI data Browser).

This flare occurred in a spotless active region. Note that all spot groups have magnetic fields, but many weak active regions don’t have spots. The formation of a sunspot requires some physics that probably does not have much to do with the flare phenomenon.

The Sun has just passed a milestone in the erratic progression of its magnetic activity, namely several contiguous spotless days have occurred in June 2016. This need not alarm students of the plasma physics associated with solar magnetism, though, since the spots themselves have little to do with flares except as a proxy index. This works well for times of high activity but not so well at times of low activity.

[1] "Lack of spots indicate Sun is coming out of puberty"