With an MHD numerical simulation recreating the evolution of a flux rope expansion during an eruptive flare [Ref. 1], we propose a 3D-extended, more complete version of the standard model for eruptive flares. We present below new understandings offered by this model.

The 3D standard model cartoon is depicted in Figure 1, and shows the evolution of reconnecting magnetic field lines and associated current/flare ribbons. This cartoon summarizes several processes deduced from the comparisons between the 3D MHD simulation and the observations, listed as follows. 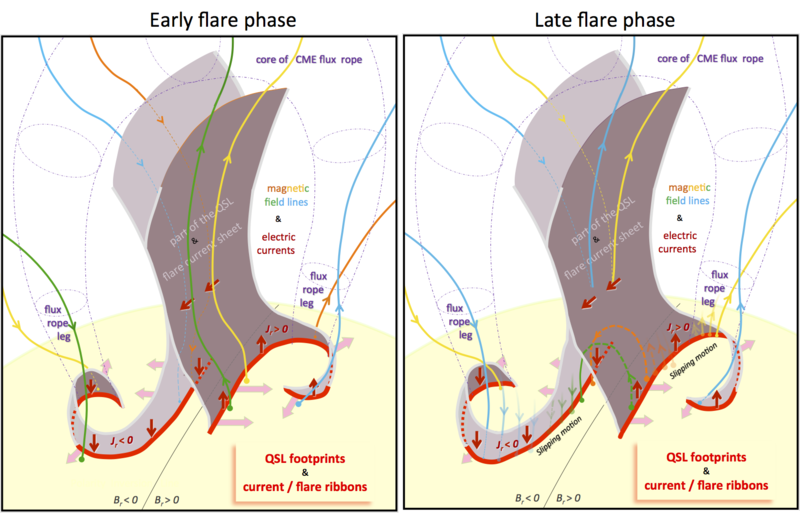 Figure 1: Cartoon of the 3D standard model for eruptive flares, showing four pre- and post-reconnected field lines. The pre-eruptive arcades undergo slipping reconnection and form flare loops (green and orange lines) and the twisted envelope of the flux rope (blue and yellow lines). The grey area represents parts of the 3D volume of the current layer and the QSL (restricted to strong currents location below the flux rope), while the J-shape red structures are their photospheric footprints.

Observations of the formation and the evolution of flare loops usually show a strong-to-weak shear evolution (see Figure 2). This transition comes from the reconnection-driven transfer of the differential magnetic shear, from the pre- to the post-eruptive configuration (green and orange lines in the cartoon), and also from the vertical straightening of the inner legs of the flux rope, which induces an outer shear weakening [Ref. 1]. 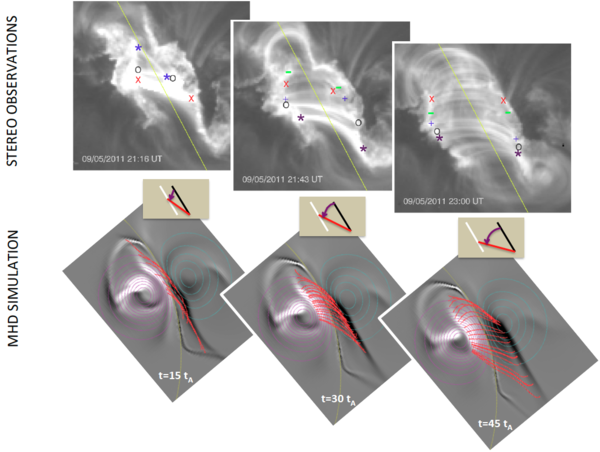 Figure 2: Strong-to-weak shear evolution for post-flare loops, as seen in STEREO/EUVI observations (top) and as reproduced with the MHD simulation of an unstable flux rope (bottom). 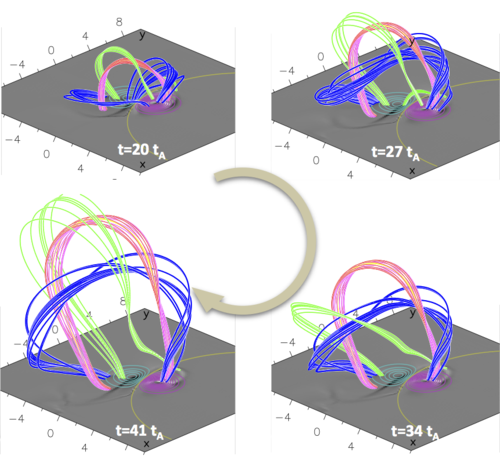 Slipping motion of field lines occurs naturally as a result of successive connectivity changes, and takes place in strong current-density region, in QSLs (see Ref. 3). Both flare loop arcades and the erupting flux rope undergo slipping reconnection during their formation/evolution process. This intrinsic reconnection regime has recently been observed during an eruptive flare [Ref.4]. 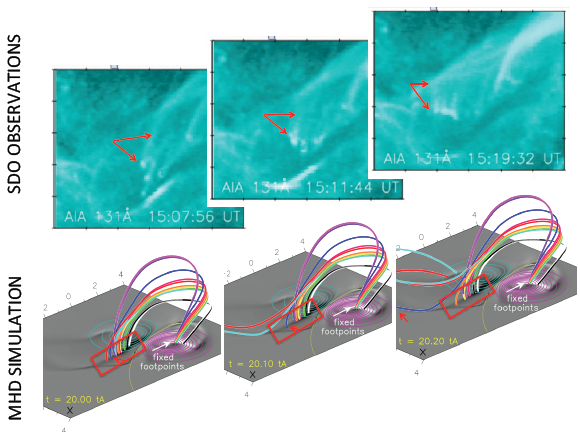 Figure 4: (top) Apparent slipping motion of field lines and associated kernels during the 2012-12-07 flare, (bottom) Slipping mechanism for field lines building up the flux rope in the 3D MHD simulation.

Figure 5: Evolution of the flare ribbons (left), and current ribbons (middle) during the 2011-02-15 X-class flare, and in the 3D MHD simulation (right). As time passes by, the straight parts of the J-shape ribbons move away from each other, while the hook becomes rounder as a result of a growing flux rope envelope. The currents increase during the impulsive phase of the flare in the localized ribbon region.

Our 3D standard model, built from a 3D MHD simulation, extends our understanding of the observational characteristics, as well as the underlying physical mechanisms of eruptive flares. Its main characteristics are outlined in the cartoon of Figure 1. This model shows that both flare loops and flux rope are constructed by 3D reconnection, in the thin coronal current layer that maps as J-shaped current/flare ribbons onto the photosphere. Field lines entering this region reconnect successively, leading to a slipping motion, as recently seen in coronal observations. This change of connectivity allows shear transfer from dynamically evolving pre- to post- reconnected field lines, and is often observed as a strong-to-weak shear transfer in flare loops observations. The flux rope, on the other hand, is constantly growing as reconnected twisted field lines construct its outer shell. From its ejection in the interplanetary medium, a flux rope can be detected as a magnetic cloud by in situ instruments away from the Sun.

[1] "The standard model in three dimensions. I. Strong-to-weak shear transition in post-flare loops"