The Good Guys and the Rascals

The tools of radio astronomy nicely complement the RHESSI views of solar X-ray and gamma-ray emissions. This is because radio waves are emitted by energetic electrons of comparable energies, and becase radio telescopes can be extremely sensitive. The radio spectrum is in fact vast - the accessible wavelength range being something like 1 mm to 10 km - and each different band tells us something about a different part of the solar atmosphere. In this Nugget we discuss "decimetric waves" near 0.1 m wavelength, or 1 GHz frequency.

Both hard X-ray and decimetric radiation are emitted during flares, and both are widely believed to originate from non-thermal electrons. One would expect that the two emissions correlate well with each other. They do not in general (see our CESRA Radio Highlight, for example). Contrary to the case of solar centimeter emissions, caused by incoherent gyro-synchrotron emission, the decimeter waves, are emitted by coherent processes. Here "coherent" means that the emitting electrons have correlated motions, which can make their emissivity much larger than that of that of the same number of independently moving ("incoherent") electrons. Only occasionally do some of these coherent decimetric emissions coincide with the hard X-rays. Some good correlations, such as the one shown in Figure 1, have been reported in the past. However, it appears that the radio emissions and hard X-rays often originate from different populations of accelerated electrons. 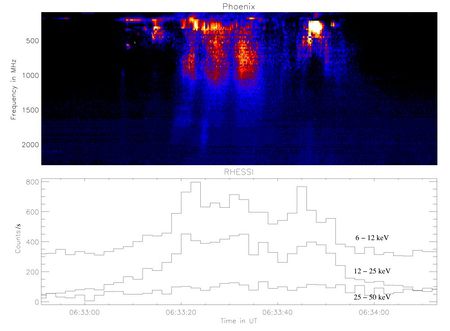 Figure 1: The event of August 14, 2004 observed by the Phoenix-2 radio spectrometer (top) and the RHESSI X-ray satellite (bottom). The event was selected for detailed analysis. The radio spectrum was cleaned from interference and shows a decimetric pulsation. The X-ray counts were binned to 2 s in time and to 3 energy channels. Data

RHESSI's spectral resolution allows the separation of thermal and non-thermal emissions. Thus the maximum number of photons originating from non-thermal electrons can be extracted. For the decimetric data we use the broadband Phoenix-2 radio spectrometer at ETH Zurich. This instrument covers the band from 100 to 4000 MHz, including the full decimetric range. This allows us to search for the best-correlating emissions as a function of frequency.

We have used the first 5 years of RHESSI operation to search for decimetric radio bursts, classified as "decimetric pulsations"or "narrowband spikes" coincident with good RHESSI coverage. These classifications describe the morphology of the event on radio spectrograms. A total of 102 pulsations and 25 spikes qualified for the comparison. Between a third and half of the events (52+-10 % of the pulsations and 44+-24 % of the spikes) were correlated with hard X-rays in the sense that the delay of peak cross-correlation was less than about 20 s. 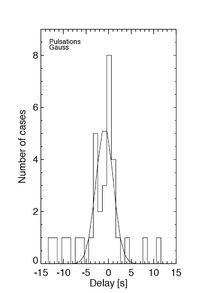 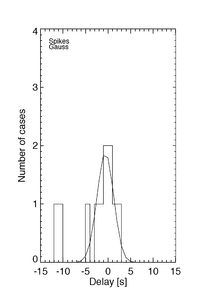 The distribution of the delays is shown in Figures 2 and 3. A Gaussian has been fitted to each of the histograms. Although there is good agreement in occurrence, the distributions show some surprises:

The bad guys in the wings contribute strongly to mean values depending on the cut-off used. This seems to be the reason for discrepant reports in the past about average delays. We find here that there is a population of decimetric pulsations and spikes, the kernels, that are not generally delayed relative to hard X-rays. If this is the case, there is a fair fraction of decimetric events that may yield additional information on the main flare energy release. We cannot go much further in identifying these important electron populations in solar flares without an imaging radio instrument in the pertinent wavelength range. Several new facilities that can contribute in this manner are now in the planning stages, and we will report on these in a future Nugget.

Biographical note: Bartosz Dabrowski was a post-doc at ETH Zurich until the end of September 2008, Arnold Benz is a professor of astrophysics at ETH Zurich.

Retrieved from "https://sprg.ssl.berkeley.edu/~tohban/wiki/index.php/The_Good_Guys_and_the_Rascals"
Category: Nugget
Facts about The Good Guys and the RascalsRDF feed