Solar flares can emit γ-ray photons with very high energies; much of this emission can persist long after the impulsive phase of the associated flare. One major source of this radiation could be the decay of neutral pions, secondary products of high-energy particles at true cosmic-ray energies [1]. The extended time scale of these late-phase events immediately suggests a relationship with solar energetic particles (SEPs), which also can continue long after the flare or the launch time of a coronal mass ejection (CME). In this Nugget we refer to these late-phase events as "sustained gamma-ray emission", or SGREs.

We know that large SEP events are mainly produced by shock waves driven by CMEs. Some flares also exhibit prompt γ-ray emisson, suggesting a distinct mechanism assocated more closely with the flaring itself, rather than the interplanetary shock wave. The SEP sources associated with interplaneatry shocks are spatially extended, and they are relatively rare. The spatially extended nature became clear when a "backside" eruption (~10° behind the limb) resulted in a gamma-ray line emission observed from the Sun-Earth line (Ref. [2]). Recent observations from the Large Area Telescope (LAT) on the Fermi satellite have made it clear that gamma-ray emission can occur from eruptions happening as far as 40° behind the limb. In principle a coronal source would be consistent with such observations, but this is highly improbable because of the very low density there. Thus the primary particles must have access to the photosphere on the visible hemisphere.

The physical nature of the γ-ray sources

Ideas focusing on the time-extended nature of these gamma-rays looked for ways to extend the life of the >300 MeV protons accelerated in the impulsive phase, e.g., trapping them in the flare loops (the PEA in Figure 1). In this scenario, the largest spatial extent of the γ-ray emission is the size of the post-eruption arcade (or flare area). In the shock scenario, the γ-ray source is spatially extended because the angular extent of the shock is much larger than that of the flare structure. The low angular resolution of the Fermi/LAT observations make it difficult to resolve this difference, but our work (Ref. 3) assembles a multiview data of the flare/CME/SGRE of SOL2014-09-01 from the SOHO and STEREO missions, to obtain a detailed picture of the eruption. In particular, it shows that magnetic structures extending beyond the flare itself, the PEA, in the form of the dimming regions, as also indicated in Figure 1. Note that an earlier Nugget has already discussed this and related events. 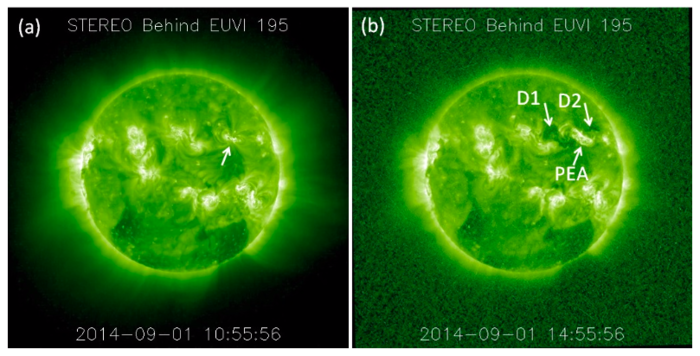 Figure 1: EUV images showing the eruption of SOL2014-09-01 in the view of the STEREO Behind spacecraft. The eruption region was hidden from Earth view. The label PEA ("post-eruption arcade" indicates the flare location, and D1 and D2 the dimming regions in which the two legs of the erupted magnetic structure are rooted. This structure, known as a flux rope, travels far into the heliosphere, often beyond Earth. The shock driven by the flux rope often extends over 180 degrees and can therefore easily extend to the frontside of the Sun.

Figure 2 shows detailed models of the flux-rope structure and the surrounding shock, derived from coronagraph observations and shown by the green and pink structures in Figure 2. The ends of the green structure (the flux rope) in Figure 2a are rooted in the dimming regions D1 and D2 identified in Figure 1b. Figure 2b is the Earth view of the eruption and the edge of the shock can be seen to cross the limb and spread to the frontside. This was also confirmed by the propagation of an EUV disturbance across the visible disk as observed by the Solar Dynamics Observatory. The blue dot represents the approximate location of the SGRE source. The blue dot is located between the near-Earth leg of the flux rope and the shock. In the STEREO view, this point is to the right of the dimming region. This is a clear demonstration that the γ-ray source is spatially extended much beyond the flare structure itself. The SGRE location is consistent with protons originating in the nose region of the shock (the pink structure) and traveling downwards along field lines located between the green and pink structures.

Figure 2: Flux rope (green) and shock (pink) structures fit to the white-light coronal mass ejection images (white in the background) of SOL2014-09-01. The white circle denotes the size of the optical Sun. The blue dot at N14E90 is the centroid of the SGRE source located between the flux rope leg and the shock edge. The shock and the flux rope moved away from the Sun very rapidly, with speeds exceeding 2000 km/s.

Figure 3 sketches the typical magnetic structures involved in an eruption associated with an SGRE: the PEA and the flux rope, both of which are products of the eruption process. The PEA remains anchored to the solar surface, while the flux rope is ejected with speeds exceeding 2000 km/s. The flux rope is a large structure rapidly expanding into the heliosphere compared to the compact flare structure. The flux rope drives a shock because of its high speed and the shock accelerates the required >300 MeV protons. The protons travel down to the chromosphere along the field lines located between the flux rope and shock and produce the gamma-rays. Particles traveling away from the shock into the heliosphere are detected as SEP events. Shocks are known to accelerate particles as they propagate into the heliosphere beyond Earth's orbit, but the high-energy particles required for SGRE may be accelerated only over a certain distance from the Sun, and this distance determines the duration of the SGRE event. In the case of the SOL2014-09-01 event, the SGRE lasted for about 4 hours. With a shock speed >2300 km/s obtained from coronagraph observations, we can infer that the shock stopped accelerating >300 MeV protons to sufficient numbers by the time it reached a distance of about 50 solar radii. 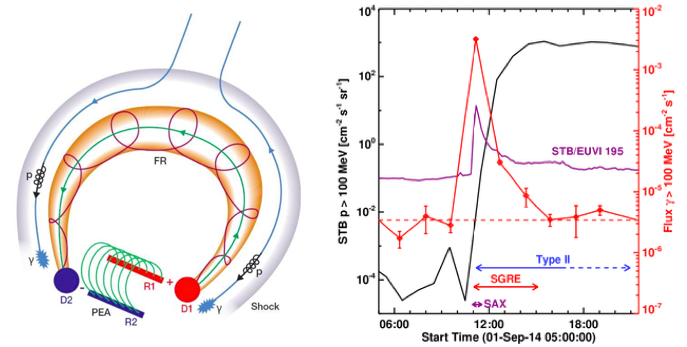 Figure 3: Left, sketch of the magnetic structures involved in an eruption that produces γ-rays (see text). The helical structure represents the flux rope rooted in the dimming regions D1 and D2. The gray region is the shock that surrounds the flux rope. The blue lines denote magnetic field lines threading the shock from the nose and ending in the chromosphere at the outskirts of the flux rope. Protons (represented by small black coils marked p) accelerated in the nose region travel along the blue field lines, collide with protons in the chromosphere and produce neutral pions that promptly decay into the gamma-rays observed as the SGRE.
Figure 4: Right, time profiles of the >100 MeV proton flux from STEREO Behind spacecraft (black curve), >100 MeV SGRE flux (red curve) and the flare light curve in extreme ultraviolet wavelengths from STEREO Behind. The horizontal dashed red line marks the γ-ray background. The duration of the type II radio burst from STEREO, the SGRE duration from Fermi, and the duration of the associated soft X-ray flare is derived from the MESSENGER/SAX instrument.

The SOL2014-09-01 event has evidence for an interplanetary shock wave from the interplanetary type II radio burst, which lasts until the end of the SGRE event and a bit beyond. The estimated duration of the type II burst (about 7.5 hours) is somewhat longer than the SGRE duration, but consistent with other examples. One of the implications of an extended SGRE source is that most of the γ-rays from a backside event do not reach Fermi, which means the actual flux and duration are expected to be much higher. The presence of >300 MeV protons is a critical requirement for SGRE events. There is evidence for the presence of such protons from both GOES and STEREO observations. Figure 4 shows the time profile of >100 MeV protons as a proxy to the >300 MeV protons. Clearly, the >100 MeV proton intensity increased by >4 orders of magnitude during the SGRE.

In summary, we have demonstrated that the temporally and spatially extended nature of the SOL2014-09-01 SGRE event follows naturally from the observations. The temporal extension is related to the continued acceleration of high-energy particles by the CME-driven shock. The spatial extension is attributed to the open field lines hugging the flux rope and threading through the shock nose. The SGRE source is naturally much larger than the post-eruption arcade to which the impulsive-phase γ-ray progenitor particles would be confined.

Retrieved from "http://sprg.ssl.berkeley.edu/~tohban/wiki/index.php/The_Temporal_and_Spatial_Extension_of_Gamma-ray_Emission_from_the_Sun"
Category: Nugget
Facts about The Temporal and Spatial Extension of Gamma-ray Emission from the SunRDF feed