The true dawn of multimessenger astronomy

The discovery of astrophysical sources of gravitational waves, remarkably, also saw detections of the event in ordinary electromagnetic radiation - a physically distinct "messenger". Some astronomers regard this as the actual dawn of "multi-messenger astronomy", with the messengers being gravitational waves, electromagnetic waves, neutrinos, and potentially, the cosmic rays themselves. This Nugget points out that a diverse suite of astronomical messengers has existed for solar flares since Carrington's discovery of SOL1859-09-01. This list has grown from three (at that time) to many, and of course current research work on the physics of solar flares, CMEs, and other aspects of solar physics depends heavily on exploiting this list.

1) Electromagnetic radiation. Of course Carrington saw the flare in white light, ordinary electromagnetic radiation. Nowadays we have become accustomed to the very broad-band nature of this radiation, which has arguably been detected from about 10 kHz to about 10 GeV, a phenomenal span of some 21 decades (or maybe 70 octaves). It is interesting to note that a magnetic "crochet," as noted in the Kew Gardens magnetometer records of 1859 now is known to result from soft X-radiation impinging on the ionosphere; of course this observation preceded Röntgen and Heaviside historically, and so the messenger had to wait to be recognized as such.

2) Plasma ejecta. This is the second messenger in Carrington's flare, detected (again mysteriously) via its sustained driving of a geomagnetic storm. The message they carry is that the flare/CME process can hurl masses on the scale of major comets, at many times escape velocity, into the heliosphere.

3) Shock waves. The third messenger, essentially a hydrodynamic shock wave but propagating in the magnetized solar wind, produces a "Storm Sudden Commencement (SSC)" via its impulse on the geomagnetic field. This also appeared in the Carrington flare, driving the Kew Gardens compass needles (now a matter of history) off scale.

All three of these messengers can be seen in the Kew Gardens magnetometer traces shown in Figure 1 here. 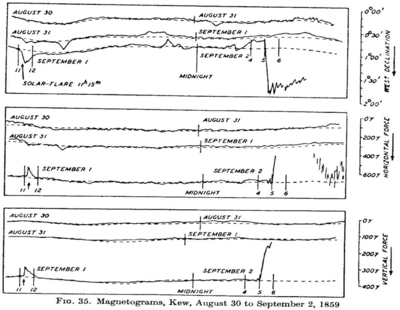 Figure 1: The magnetometer traces from Kew Gardens for the Carrington flare. The figure shows three consecutive days, each in the three magnetic components detected, with the pre-event days establishing the stability of unperturbed daily variations. One does not see the white-light flare here, but the early deflections are the soft X-ray "crochet" and the late deflections include the SSC and geomagnetic storm. These recordings were made by delicate electromechanical instrumentation without benefit of electronics, a world apart from LIGO but certainly also at the cutting edge of existing technology. (from [Ref. 1]).

4) Cosmic rays. Not noted until the 1940s, "solar cosmic rays" (SEPs) are close kin of galactic cosmic rays, and reveal that the flare/CME process can accelerate particles to relativistic energies and in great profusion. Thus, flares/CMEs have a baryonic messenger.

5) Neutrinos. These have not been detected from solar flares, but the Nobel prizewinner Ray Davis enjoyed speculating about their contribution to the anomalously large neutrino counts his Homestake Mine experiment was detecting (Ref. [2]) and, of course, upper limits also have some physical significance. This messenger definitely has interesting news about stellar structure and about basic physics.

6) Gravitational waves. Again these have not been detected, but must exist because of the quadrupole impulse of the flare ejecta. Here there is an upper limit that is so outlandishly high that there do not appear to be any speculations whatsoever!

7) Axions. The Primakoff effect guarantees an axion flux secondary to the flare X-rays, if these important but still hypothetical particles actually do exist. Again, upper limits matter, but again, these would almost certainly not be interesting ones in the solar-flare case. Again, this messenger would have significance for stellar structure and for basic physics.

8) Neutrons. One might be tempted to say that this is not an independent class of messenger, since neutrons are merely more baryons. These could never be detected directly from a non-solar source because of the radioactive decay of the messenger on a relatively short time scale. Solar neutrons have been detected both indirectly (as decay products) and directly.

9) Energetic neutral atoms. Again, this messenger could never be detected from an extrasolar source because they would convert to ions on a relatively short time scale. In one well-documented solar flare, ENAs have been detected (Ref. [3]), and almost certainly would become an interesting routine messenger with the right instrumentation.

10) Interior acoustic waves. Not really analogous to the well-known baryon acoustic oscillations (BAO), these are running waves embodying the flare mechanical impulse on the body of the Sun. Perhaps the BAO are more like the p-modes inverted in the unit sphere!

Solar flares and CMEs announce their presence via many messengers. These are basically the same ones noted for the wonderful new gravitational-wave detections, but in different measures (i.e., completely undetectable as gravitational waves - but then, coalescing black holes were undetectable only a few years ago). The same messengers must exist, because solar flares and neutron stars occupy the same universe and and share the same physical laws. At present, because of its proximity, we have a broader array of messengers from the Sun than from any other astronomical object. Also, they began to arrive in the 19th century.