Unexpected intensity distributions of solar electrons in the heliosphere

Solar energetic particles (SEPs) accelerated in the solar corona during flares/shocks/CMEs can escape into the interplanetary medium along "open" magnetic field lines and may be detected far away from the Sun, e.g. at 1 AU, by particle detectors on spacecraft out in the heliosphere. Near Earth, we have ACE, SOHO WIND. These all have similar perspectives, and so the intercomparisons of their data do not provide much information about how this escape actually happens - the particles must move essentially as guided by the magnetic field, but how do they get injected into it, and what is its configuration anyway?

Now, after the launch of the two STEREO spacecraft into the deeper heliosphere (ahead and behind the Earth, but essentially in its orbital track, we get an unprecedented ability to study the spatial destribution of high energetic particles routinely around the Sun from three strongly separated points of view (the two STEREO positions and the Lagrangian point L1 near the Earth). These studies have shown the existence of so-called widespread or circumsolar SEP events [1] observed by the widely separated STEREOs and near-Earth spacecraft. The electrons accelerated during a single flare/CME event, it turns out, may be distributed very broadly: up to 360 degrees around the Sun at 1 AU. 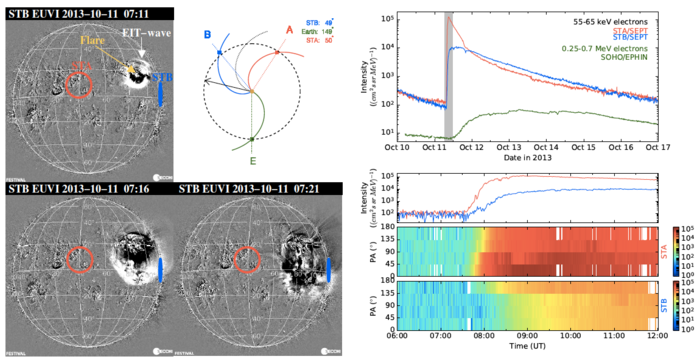 Figure 1: A solar electron event occurring on October 11, 2013, associated with a halo CME and a flare just behind the E limb of the Sun. Right top, the time series of energetic electrons detected on STEREO-A and -B, and at SOHO near Earth. The lower panel shows the electron time profiles and pitch-angle distributions at the two STEREO spacecraft for the shaded interval. Left, the upper right panel sketches the locations of the spacecraft, and the other three panels show the development of the global disturbance as observed by STEREO-B relative to the nominal magnetic footprints of STEREO-A (red) and STEREO-B (blue).

This offers a long-standing puzzle: the magnetic field at widely-spaced points in the heliosphere connects to very different locations at the Sun or anywhere in between. What can inject these particles so promiscuously?

Figure 1 shows the kind of observational material that STEREO has provided. Note that the two STEREO spacecraft started near the Earth, and have gradually drifted ahead and behind Earth in its orbit; these early observations ([1]) refer mainly to the events happening with very wide separations in heliolongitude.

As time progressed, the STEREO spacecraft converged behind the Sun (superior conjunction, astronomically) and their separations became small. This afforded us a chance to study small-scale features in the angular distribution of the solar particles ([4]). The surprising result, summarized in Figure 2, is that many events in this interval do not adhere to the simple Gaussian distribution with a maximum around 0o which we have typically used to fit SEPs angular distributions. 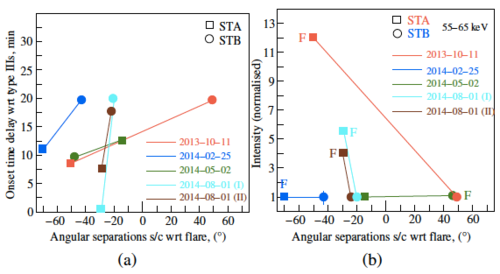 Based on this, we propose a scenario consisting of a Gaussian-like intensity distribution (approximately uniform) with "fingers" superposed. Fig. 3 shows an intensity contour plot explaining the idea. Depending on the location of each individual spacecraft relative to the fingers, i.e. at the fingertip or between them, the measured intensity could be very different even for closely spaced spacecraft with relatively small separations from one another. The origin of fingers and valleys is not clear yet; they might be caused by different phenomena in the corona, possibly occurring mainly below the source surface. We propose that the open magnetic fields from the flaring active region extended into the IP medium provide a prompt access of energetic particles into the IP medium, and form the fingers. Consequently, the spacecraft situated on the fingers will detect not only a higher intensity, but also an earlier SEP onset. The valleys between the fingers could be formed by large-scale "closed" magnetic fields around the active regions, and/or by coronal holes and high-speed streams with a stronger turbulence and consequently with stronger scattering effects.

In our view structures such as those sketched could explain many things: (1) by apparent strong deviation of the interplanetary magnetic field from the nominal Parker spiral, e.g. due to an en route ICME displacing the optimal magnetic connection to the source; (2) by fan-shaped, strongly tilted and non-radial magnetic field connecting the parent flare/source to the source surface [2]; (3) by large-scale meandering field lines, which can lead to the mixing of empty magnetic flux tubes and those filled with energetic particles due to some flux tubes being connected to the source region and others not; (4) by strongly differing IP propagation conditions along the different paths to each spacecraft, which may essentially affect the electron mean free path, the anisotropy, the intensity and consequently the onset time at 1 AU; (5) by global asymmetric CME/shock configurations, which determine the SEP injection and the intensity distribution at different longitudes; or (6) by multi-point injections into different coronal magnetic structures below the source surface [3].

These results point to fine structure in the angular intensity distributions, something which could not have been well-observed before from the ad-hoc interplanetary flotillas of spacecraft available. Now STEREO has given us a systematic view, and it suggests fine structure in the access to interplanetary space for energetic electrons injected by flares and CMEs in the inner corona. In this work we remain hampered by the very limited sampling afforded by the interplanetary spacecraft, and by the difficulty of remote sensing of the phenomena near the Sun that affect the particle injection.