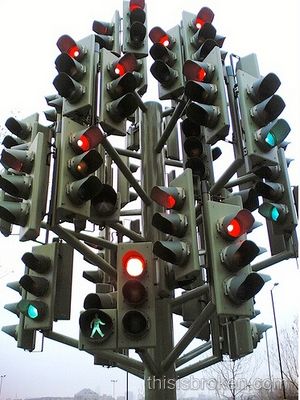 Delightful traffic engineering! A special Nuggets prize offered for the first reader to identify this intersection (hint:is it in California?).

You might drive a car in a foreign city and have to stop at many red traffic lights (e.g., Figure 1). From the statistics of waiting times you probably can quickly figure out which signals operate independently and which ones operate the smart way with inductive-loop traffic detectors in a so-called demand-actuated mode. Thus, the statistics of waiting times bears crucial information how a system works, either having independent elements that act randomly, or consisting of elements with long-range connections that enable coupling and synchronization. In geophysics, aftershocks have been found to exhibit different waiting time statistics (Omori’s law; cf Omori) than the main shocks of earthquakes. In magnetospheric physics, the waiting-time statistics is used to distinguish prosaic Poisson random processes from more sophisticated kinds of variability: self-organized criticality, intermittent turbulence, finite system size effects, or clusterization. Such processes have been described for auroral emission, the auroral electron jet (AE) index, or substorms at the Earth’s magnetotail.

Waiting-time statistics is studied intensely in solar physics, where most flares are found to be produced by a Poissonian random process, but there are also so-called sympathetic flares that have a causal connection or trigger each other. The waiting-time statistics of solar flares has been studied in hard X-rays, in soft X-rays, for coronal mass ejections (CMEs), for solar radio bursts, and for the solar wind. In astrophysics, waiting-time distributions have been studied for flare stars as well as for black-hole candidates such as Cygnus X-1. 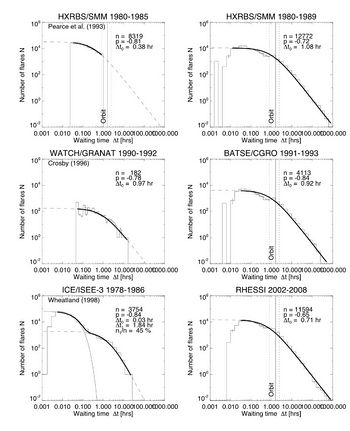 Events such as solar flares (and many other natural phenomena) may occur in great profusion. We may or may not understand the details of the physics in each case, but often there are organizing principles derivable from the statistics of the event occurrence.

Solar flares are about the best-studied phenomenon that exhibits self-organized criticality (SOC). A necessary (but not sufficient) criterion for SOC is the statistical independence of individual events, which primarily can be tested with waiting-time distributions. The new result is that the statistical distributions of waiting times observed during three solar cycles with different instruments are fully consistent with a nonstationary Poisson process; this corroborates the conclusion that solar flares are indeed a SOC phenomenon.

[2] The Origin of the Solar Flare Waiting-Time Distribution