A solar flare produces emissions detected all across the electromagnetic spectrum, and thus involving all "layers" of the solar atmosphere. In particular the chromosphere may contain some of the decisive physics, based upon the newest data.

Recent space-borne UV - EUV - X-ray spectroscopic observations allow us to investigate the flare plasma properties and their temporal evolution throughout the solar atmosphere, chromosphere to the corona. For example, the Doppler velocity from the UV-EUV spectra gives information about plasma flows in the solar atmosphere which can be compared with the velocities from simulation models, helping to understand the flare heating process [Ref. 1]. Our diagnostic abilities for temperature and density have been greatly extended recently with wide wavelength coverage of the space-borne spectroscopy and simulations [Ref. 2]. Taking advantage of the combining UV-EUV imaging spectroscopy, in this Nugget, we report the flare plasma dynamics and energy flux through the solar atmosphere during a white-light flare (WLF) using the multiple spectroscopic observations, and then, we try to understand how the visible continuum is produced [Ref. 3].

A flare kernel observed by SDO, IRIS, Hinode, and RHESSI

NOAA AR 12192 was the largest active region in Solar Cycle 24. Many coordinated observations concentrated on this region, and an X-class flare was observed by multiple space-based observations covering the whole flare duration (SOL2014-10-22T14:02). Figure 1 shows the flare observations from GOES, SDO/HMI continuum, [1], IRIS, Hinode, and RHESSI spacecraft. These multi-wavelength spectroscopic observations show that the flare kernel was localized during the impulsive phase and that the HXR emission, chromospheric intensity, and WL continuum emission in the kernel are spatially and temporally correlated. Figure 2 shows the Doppler velocity and line width of UV-EUV spectra in the localized bright kernel with a time and a peak formation temperature. As Figure 2 shows, we found that strong evaporation flows (up-flows in hot lines) occurs and there are strong enhancements in line width during the first peak of the HXR emission, which is also coincident with the timing of the WLF. This may indicate that electron beam heating produces strong evaporation flows and there is turbulence from the reconnection or non-thermal electron heating. 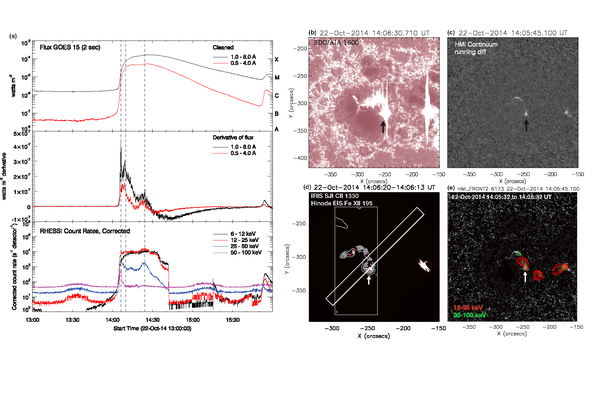 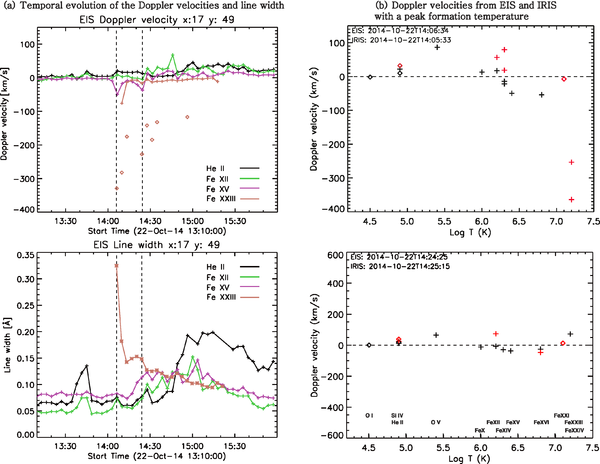 The continuum enhancement of the flare kernel (WLF) implies that the flare energy is transported to the lower atmosphere and produces the chromospheric and photospheric emission. To understand the heating process and how the WLF kernel is produced, we tried to estimate the deposited and dissipated energies from the X-ray, UV, and continuum intensities. Figure 3 shows the IRIS Mg II spectra in the flare kernel and the temporal variation of the estimated energy flux from the X-ray, UV, and continuum intensity. The Mg II subordinate line (Mg II triplet) is in emission during the impulsive phase of the flare while the Mg II triplet mostly was observed as absorption in quiet regions (Figure 3a). It has been reported that a strong enhancement of the intensity ratio of the Mg II core to wing (emission) implies the existence of a steep temperature gradient and heating [Refs. 2, 4]. Taking the measured energy flux from this spectra as an estimate of the amount of energy dissipated in the chromosphere, it is about 6-22% of the energy deposited by the accelerated non-thermal electrons as measured by RHESSI, assuming the cutoff energy of 30-40 keV (Figure 3b). This result implies that the majority of the energy from the non-thermal electrons accelerated in the corona is still available to directly produce a WLF in this event. The correlated temporal variations of the HXR, WL, explosive evaporation flows, and the Mg II line response, together with the comparison of the energy flux through the corona to the chromosphere, imply that the flare heating and evaporation flow are driven by non-thermal electrons, though we cannot rule out a possible contribution from Alfvén wave heating. 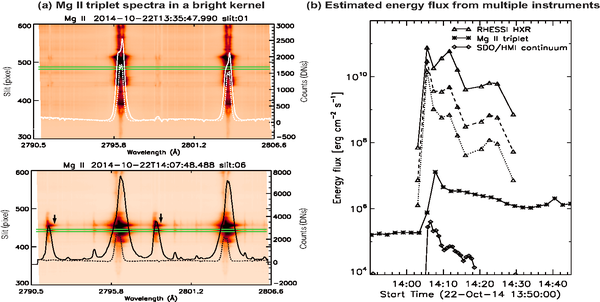 Figure 3: (a) IRIS detector images of the Mg II h & k spectral windows overlaid with the averaged spectral line profiles at the location marked by the two horizontal green lines. The solid lines represent the line profiles during the pre-flare (top) and impulsive phase (bottom) and dotted lines correspond the line profile before the flare (around 12:00 UT). The arrows indicate the emission of the Mg II triplet lines.
(b) The energy flux of the bright kernel during the flare impulsive phase estimated from the RHESSI HXR emission with different threshold energies of 30 keV (solid line), 40 keV (dashed line), and 50 keV (dotted line), the Mg II triplet intensity observed by IRIS, and the WL continuum emission from SDO/HMI.

We have investigated the temporal variation of the spectral properties of a WLF kernel and estimated the energy flux at different wavelengths. By comparison of the measured spectral properties and energy fluxes in different wavelengths, it appears that the flare emissions could have been directly produced by non-thermal electrons. The flare we investigated is quite strong (X1.6 classs), and while the accelerated non-thermal electrons from this strong flare could produce a WLF directly in this event, we still do not know whether most WLFs can be produced by the energy from the accelerated electrons. We particularly do not know yet whether this process works even in small flares. Therefore, further studies applying similar techniques to other flares that produce visible continuum emission are required to confirm whether they can also be produced directly or not.

[1] "Simultaneous IRIS and Hinode/EIS Observations and Modeling of the 2014 October 27 X2.0 Flare"

[2] "The Formation of IRIS Diagnostics. IV. The Mg II Triplet Lines as a New Diagnostic for Lower Chromospheric Heating"

[3] "Hot explosions in the cool atmosphere of the Sun"