RHESSI is a Fourier imager, which means that it obtains amplitudes and phases (a.k.a. "visibilities") of the X-ray image modulations. This particular choice for an imager design was driven by many forces, not the least of which was the mantra "faster, better, cheaper" which put strong cost and size constraints on the Small Explorer (SMEX) satellites of the 1990s. Previous solar instruments that used Fourier techniques were Hinotori, HEIDI, and HXT, but RHESSI has unique new Fourier/visibility-based capabilities that are only now beginning to be exploited.

What does Fourier have to do with imaging? The 18th century mathematician Jean Baptiste Fourier discovered the principle that any signal can be broken up into a superposition of sines and cosines, or the equivalent amplitudes and phases, but he did not himself invent Fourier imaging. Applications of Fourier methods to imaging had to wait until the late 19th century when the amplitude and phase pairs of optical interferometry (see this 69-page .pdf document for full detail) came into use, and these paired variables came to be known as visibilities, as in "fringe visibility". Later in the 20th century radio interferometry used the same entities, and now hard X-ray astronomers have joined the visibility game (see this 8-page .pdf document for details).

How do we create visibilities?

To get actual sine and cosine components of hard X-ray images is difficult, but RHESSI uses a good approximation: triangular waveforms. In the ideal case - constant background, thin grids, and high photon rates - the modulated waveform generated by photons incident on one of RHESSI's sub-collimators has a triangular profile (Figure 1). The amplitude of the waveform is proportional to the intensity of the beam, and its phase and frequency depend on the direction of incidence. For complex sources, and over small rotation angles, the amplitude and phase of the waveform provide a direct measurement of a single Fourier component of the angular distribution of the source. Different Fourier components are measured at different rotation angles and with grids of different pitches. 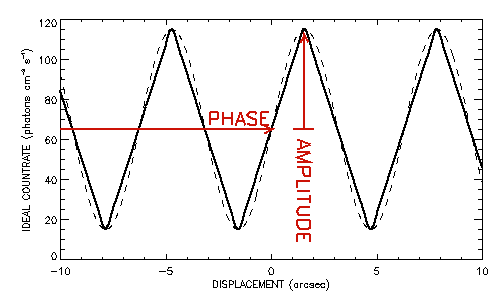 From time tags to visibilities

We illustrate the end-to-end process of computing visibilities for a particular flare interval, a single subcollimator, and a single energy band. The primary RHESSI data are photon time tags and pulse heights, which must be transformed in various ways before imaging is possible. RHESSI's time tags and pulse heights for a selected 100-ms interval are shown in Figure 2a. These time tags have not yet been binned in energy or time, so they are difficult to interpret by eye. Several gaps produced by cosmic-ray hits are present.

A sequence of basic (linear) operations must be performed on these data to convert them to visibilities. The next step is to bin the data in energy and in uniform roll-angle bins, as shown in Figure 2b.

The next step is to "histogram" the time tags into "roll bins," ie units of RHESSI rotational phase, as shown in Figure 2c for 3 rotations.

We now progress further towards constructing visibilities by binning the modulation cycles into roll bins, which are then binned again into 12 aspect phase bins. In this case there are 16 roll bins, three of which are outlined in color (blue, orange, and cyan) in each rotation. After phase binning, each of these rollbins can be co-added.

This process, called "stacking" increases the signal-to-noise ratio and provides a platform for computing a mean amplitude and phase. This generally improves the aspect phase coverage because the angular drift of the telescope causes the aspect phase to differ from one rotation to the next. After stacking we fit sinusoids to the profiles (red curves in Figure 2d).

In order to calibrate the parameters generated by the fits, a number of corrections must be made. The grids have a finite thickness, which produces internal shadowing and modifies the triangular-like response; this also causes a decline of transmission as a function of the off-axis distance; the grid slats are not all perfectly aligned parallel to the optical axis, which leads to a "venetian blinding" effect, which makes even and odd half-rotations unequal; and there are detector-to-detector sensitivity differences. Fortunately, RHESSI was calibrated in many ways before launch, and the instrument has many self-calibration capabilities, so all of these effects can be calibrated out. Using the RHESSI calibrations, one may remove the instrumental dependence and convert the sinusoids to photon rates.

The final steps in constructing visibilities are to output the amplitudes and phases of the fitted sinusoids, and compute error estimates based on photon statistics and instrumental systematics. Figure 2e shows the computed amplitudes in the upper panel, and the visibility phases in the lower panel.

Figure 2e: Visibility amplitudes and phases derived from the stacked counts in Figure 2d. Roll bins 3,4 & 5 taken from the three selected regions are shown in the same colors as the previous figure.

Note that the visibility amplitudes are in units of photon flux, unlike the stacked modulation profiles, which are in counts per bin. Since the calibrations have been applied, the visibilities are very nearly independent of the instrument. The importance of this instrumental independence is hard to overestimate. It makes it possible, for example, to use radio imaging techniques such as MEM for RHESSI imaging, and to do forward fitting (see earlier nugget). We list several other applications of visibilities later.

Above, we showed data for only a single subcollimator. But RHESSI's great imaging power results from its coverage of a wide range of spatial scales with its nine subcollimators. Here (Figure 3) we show the amplitude dependence as a function of both subcollimator (SC) and roll angle (PA). The X-axis is a linear combination of both variables in the form SC+PA/180. Thus, for example, the roll angles 0 to 180 degrees are shown for subcollimator 6 for X between 6.0 and 7.0.

Figure 3: Observed visibility amplitudes (blue crosses) for a flare interval as a function of subcollimator (SC=1-9) and position angle (PA=0-180°) of the grids. Each of the 9 vertical panels shows the amplitude as a function of PA for one subcollimator (labeled by red digits below the X axis). The red curve represents a model using two Gaussian sources, and the green squares show the residuals relative to the model. For a given subcollimator (6 and 7 are good examples), the amplitude rises and falls sinusoidally while the grids rotate from PA=0 to PA=180°. In general, such sinusoidal variation indicates an extended or double source.

The observed amplitudes are indicated by blue crosses and their associated estimated standard errors are shown by vertical error bars. Note the variable amplitude as a function of roll angle for each subcollimator. This variation is caused by the "beating" of two flare sources against each other. Note also the gradual falloff of amplitude as the subcollimators become finer (towards smaller X). This falloff is the result of the finite sizes of the sources. When the angular pitch is smaller than the source size, the modulation amplitude is reduced (and the error bars become larger).

The solid red curve shows the visibility computed for a model given by two Gaussian sources. For subcollimators 2-9, the model fits the observations quite well. For the finest subcollimator, the angular pitch is much smaller than the source size, and the amplitudes are essentially indeterminate. The residuals, shown by squares, are relatively small for all subcollimators above 1.

Amplitude profiles such as this (and of course, phase profiles, which, for reasons of nugget space we do not show) are invaluable for diagnosing source structure of many kinds.

What use are RHESSI Visibilities?

Aside from the advantages that RHESSI visibilities are a highly compact, device-independent representation of the data, there are several other advantages to creating them. For one, making maps can be greatly sped up by using highly optimized radio astronomy programs (see this 18-page .pdf paper for details). For another, one may reliably determine source sizes using a visibility forward-fit routine. Other (as yet) barely-exploited advantages are

Another important current use is the self-calibration of phases. By means of such self-calibration it will become possible to utilize the 2nd and 3rd harmonics of the near-triangular RHESSI waveform (Figure 1). Up until now, we have used only the fundamental sinusoids, but the higher harmonics will provide more complete coverage of the Fourier plane for better imaging and higher resolution, as good as ~ 1 arcsec.

The RHESSI software team, particularly Richard Schwartz and Rick Pernak, have helped bring us into a renaissance of visibilities. Without their continuing assistance, the team would still be in the dark ages of Fourier imaging.