Back from the Far Side

Last month's big sunspot group has returned, nicely anticipated by GONG's far side imaging. Upon its return to the visible hemisphere, it has already produced some extremely interesting flares - a trio of homologous events, again "ordinary flares" (with no CMEs) as with the major flares it had produced on its previous appearance. So far as we on the front side know, this region has produced no CMEs since October 14.

Figure 1 shows how it looked on the far side of the Sun as imaged via the clever analysis of acoustic waves introduced in Ref. [1]. Note that the spatial resolution of this seismic imagery is not as good as that of HMI, for example, and that the signature does not represent sunspots directly but rather their effects on the phases of sound waves. The technique works because sunspots absorb the energy of solar p-mode standing waves, resulting in an input/output deficit in wave power.

Fig. 1: A representative farside image of AR2192 after its rotation across the W limb.

We have updated Figure 2 of our previous Nugget, which compared the variation of spot area in NOAA active region No. 2192 with that of Region 0486, from the notorious Halloween flares of 2003. Note the exact match in phase after 4,013.0 days (or 11.0 years)! This would be a coincidence, of course. 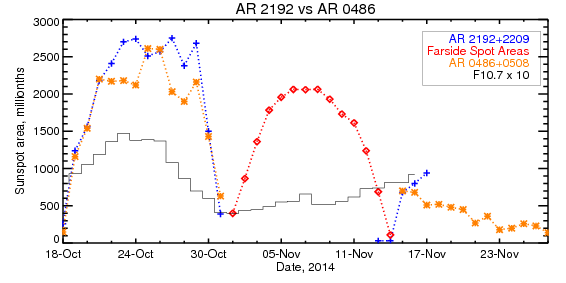 Fig. 2: A two-rotation comparison of the sunspot areas, in millionths of the hemisphere, for the return of NOAA region 2192 (blue). The red points are scaled from the far side seismic imaging. Both near-side and far-side points have discrepancies near the limb. The far-side imaging has anticipated the F10.7 irradiance increase associated with the return of this region (histogram).

In Figure 3 we show the standard GOES soft X-ray data for three days in the life of the returned region. None of the flares from AR 2209 to date have produced a CME, continuing the curious behavior of this region's life as AR 2192. The three homologous flares are

of which the middle one did have a surge/spray/jet, feature, along with with radio type III bursts (possibly implying the presence of open magnetic fields, but no CMEs. We did not expect this based on our earlier experience with the "last best region" of Solar Cycle 22 (Ref. [2]) and other major active regions, which may produce CMEs after their flare productivity diminishes. 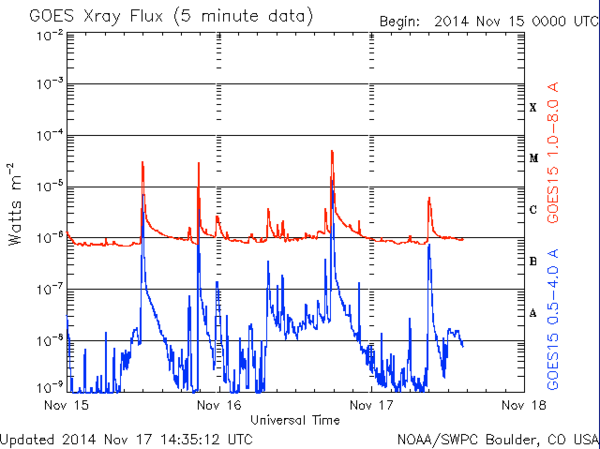 Fig. 3: Standard soft X-ray records for three days early in the returned life of AR 2192, now known as AR 2209. The three similar M-class flares each have an impulsive spike, followed by a longer-duration tail resulting from the cooling of the flare loops in the usual pattern.

It is an extraordinary coincidence that exactly 11 years, or 4013.0 days (to be precise) after a major sunspot group in 2003, that we should have this cycle's largest one popping up. But that is not what is interesting. The flares themselves are remarkable and will be the subject of many studies, which we can try to follow as discoveries are made. It is most important for space weather applications to understand why this region could produce such powerful flares without CMEs. The added interest here is the tendency for homology, as described. Stay tuned!

[1] "Seismic Images of the Far Side of the Sun"

Retrieved from "https://sprg.ssl.berkeley.edu/~tohban/wiki/index.php/Back_from_the_Far_Side"
Category: Nugget
Facts about Back from the Far SideRDF feed