For unclear reasons, July 14 has seen several interesting flares, such as the famous one originally termed the "Bastille Day Flare" in 2000. This flare (SOL2000-07-14, M5.7) has been well memorialized in the literature and in various Nuggets, but the latter were back in the Yohkoh era (i, ii, iii). Many lessons were learned from this flare, which had a fine display of loops that remains an iconic illustration of this flare arcade coronal restructuring. Reference [1] introduced the world to this event as an epitome of the effects of large-scale flare magnetic reconnection. 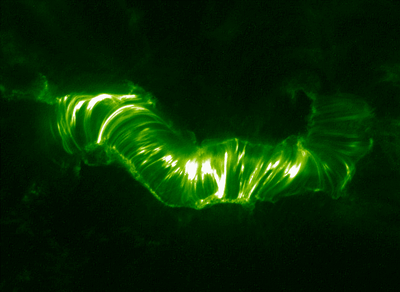 Figure 1: The celebrated soft X-ray/EUV "arcade" structure of the original Bastille Day flare, SOL2000-07-14, as obtained from the Astronomical Picture of the Day website. It shows a 171 Â image from the TRACE satellite.

Then in 2004 another Bastille Day event happened, SOL2004-07-14 (M6.2), which now fell in the RHESSI era (and was well observed in hard X-rays) but somehow did not produce a Nugget (see however Ref. [2]); a description of magnetic implosion in a confined flare event..

The very next year Bastille Day saw an X-class flare, SOL2005-07-14 (X1.2), which did excite a RHESSI-era Nugget (iv). This flare was curious in that it had no well-developed CME and instead revealed a "failed" filament eruption, but also exhibited an implosion.

So far as we can tell, no other memorable flare has happened on Bastille Day since 2005. But here, one 11-year cycle later, we have had SOL2017-07-14 (M2.4) occur in the declining phase of Solar Cycle 24. This event, illustrated in Figure 2, dominates the soft X-ray timescape with the long-decay property suggestive of an extended coronal event, with a CME and radio type II/IV emissions. This appears to have been the case, although some of the needed data are not available quite yet. 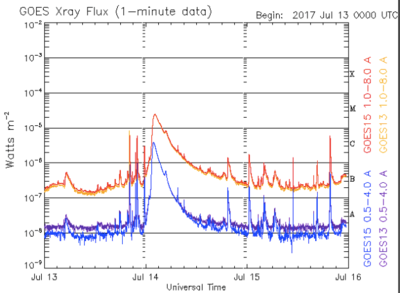 RHESSI observed this event quite well. Figure 3 shows that this event had the sigmoid-to-arcade development typical of this kind of flare (Ref. [3]). Note that RHESSI's hard X-ray footpoints neatly fit into the flare ribbon structures - just like SOL2000-07-14 where the concept of a "Bastille Day Flare" originated. The spectrum at flare maximum (right panel) shows soft and hard X-ray components consistent with our observations of similar events.

Is Bastille Day, over the decades, really a focus for major solar fireworks? This would be highly unlikely, and although we have cited four major events in 18 years here, that is not far from what one expect from a reasonable mean level of solar activity - about a 25% chance, per day, of seeing an M- or X-class flare. For RHESSI's first 11-year time span, the corresponding rate was 0.23 +- 0.03. So, no exceptionalism here.

A crude prediction for 2018 then, factoring in a guess at the solar-cycle dependence, suggests only about a 10% chance of another remarkable event next year - stay tuned to these pages and we will let you know then.

[1] "The Topology and Evolution of the Bastille Day Flare"

[2] "Large-scale Contraction and Subsequent Disruption of Coronal Loops During Various Phases of the M6.2 Flare Associated with the Confined Flux Rope Eruption"