One of RHESSI's remarkable scientific contributions has been its determination of the oblateness of the Sun by use of its Solar Aspect Sensors [1]. Except in the most general of links via solar magnetism, the dynamo, etc., this has little to do with RHESSI's main scientific objectives, but the result really flowed from the RHESSI design philosophy of rotation and high-bandwidth aspect determination.

Now we can take another step forward, thanks to the remarkable total solar eclipse that is coming up on August 21. As should be well-known to all by now, the path of totality for this eclipse extends across the whole of the continental US, from Oregon to South Carolina, and takes an hour and a half to do this. Thus in principle we have a chance to watch coronal development - with the unique advantages that an eclipse brings - for this whole time. The resulting data cube, massive and complicated, we term the "Eclipse Megamovie" and have teamed with Google to make it possible. The purpose of this Nugget is just to make sure that all members of our readership here know that they can participate at any level they wish to; for serious camera buffs, there is a team of volunteers - well more than a thousand at the time of writing - who agree to contribute their raw images to the Megamovie database, which will be public-access and also, we hope, the basis of many citizen-science projects in the best Berkeley tradition. For those uninterested in photography, but with a smartphone equipped with camera and GPS, we can also make excellent scientific use of the data to follow up on the RHESSI oblateness measurement.

The eclipse and its promise

Figure 1 shows a snapshot of Xavier Jubier's wonderful interactive map of eclipse parameters. The Google-based map, at that link, is fully interactive and is loaded with details. The black dot is the point of maximum duration, and is not far from Carbondale, IL, the self-styled "eclipse crossroads" city because there will be another beautiful one in 2024 - you an also check out Xavier's map for that one. 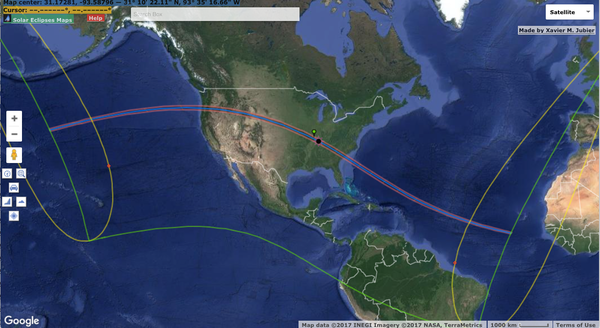 Figure 1: The Jubier/Google interactive map for the total solar eclipse of August 21, 2017.

We think that this particular eclipse opens up new parameter space in a fairly staid research area. In other words, we expect discovery. One innovation is just the archive itself - nobody has done that before, and Megamovie's will be the first. With this archive we can graduate directly from snapshots at fixed sites into a way of seeing the lower corona dynamically, with far better time resolution than one could ever hope to get from an expensive space observatory. In earlier eclipses one has had hints of this movie power; Figure 2 is adapted from Ref. [2], in which two sites contributed to the difference image shown. The 35-minute elapsed time between two snapshots clearly showed many dynamical processes, including at least two CMEs.

Figure 2: A two-frame "movie" from the total solar eclipse of 2012 in the South Pacific, presented here as a difference image (right frame) as well as a sharpened reference image (left). Note the presence of several discrete transient features, plus image distortions seen mainly in the form of radial artifacts (Ref. [2]).

In addition to discrete transient objects, we expect that huge oversampling in the time domain will enable observations flows and waves in the lower corona, really accessible only during a total eclipse via straightforward Thomson scattering.

An app, "Eclipse Megamovie Mobile" adds to the Megamovie program. The app (free, and availlable both for Android and iOS) operates the smartphone camera and uploads its data (with metadata) to the Google servers for Megamovie input, all in a hands-off manner. This exploitation of the brilliant consumer electronics available here, really for the first time in a lengthy eclipse, will let us obtain photometric observations of Baily's Beads at many points and with great timing precision based on GPS. Not only will there be timing precision consistent with milli-arcsec spatial resolution, but the astrometry will be comparably superb thanks to Kaguya and the Lunar Reconnaissance Orbiter, which have mapped out the entire surface of the Moon to 5-m precision. Suddenly the Moon has become an amazingly good astrometric reference! It should be mentioned that this eclipse also features Regulus in the star field; this is bright enough to appear in any long coronal exposure and also will help to stabilize the Megamovie movies.

The smartphone cameras are also good enough to use as coronal imagers as well as timing photometers. This requires an external clip-on lens, and the Megamovie Mobile app provides full descriptions of how to do this, with video explanations produced by Megamovie colleague Mark Bender. He has tested 50x telephoto clip-ons with great success; the most serious technical difficulty lies in getting the setup pointed correctly at this magnification. With a cheap tripod, however, the app provides detailed guidance on pointing, enabling a user basically to calibrate the smartphone's compass and accelerometer locally. We hope that many people will get external lenses, take the time prior to the event to learn the calibration methods, and then can sit back and enjoy the great spectacle as the app does its observations automatically.

We believe that the two great innovations here - the new parameter space of the archive, and the first-ever systematic timing of the eclipse shadow at high resolution - will lead to discoveries of several kinds. As Mark Bender, our photographer/producer colleague likes to remark, the Megamovie is a wholly new way to look at an eclipse, and we encourage all viewers of the eclipse to take advantage of this opportunity for seriously new discovery.

Retrieved from "https://sprg.ssl.berkeley.edu/~tohban/wiki/index.php/RHESSI_and_the_Megamovie"
Category: Nugget
Facts about RHESSI and the MegamovieRDF feed