Can magnetic reconnection cause solar rainstorms?

Coronal rain is a common phenomenon occurring at the Sun in active region coronal magnetic loops. As the name suggests, it shares many parallels with its terrestrial counterpart; it consists of cool plasma droplets or condensations falling from coronal heights towards the solar surface guided by the magnetic field.

The coronal plasma can cool down and condense via a process known as a thermal instability. This results from the loss of balance between processes responsible for the heating and cooling of a coronal loop. Coronal loops seem to be heated predominantly at the footpoints via dissipation of magnetic and wave energy. Conversely, they are cooled by radiating their thermal energy away. The denser they are, the more quickly they cool. If the heating at the loop footpoints is sufficiently strong, it causes an ablation of the chromospheric plasma ("evaporation") into the upper parts of the loop, which thus become overdense. This accelerates the thermal losses of the plasma at the loop top, which eventually becomes thermally unstable and condenses into cool and dense plasma droplets.

Thermal stability of coronal loops is therefore governed by spatial and temporal characteristics of the processes that are responsible for coronal heating. The heating has to be strong enough to cause plasma evaporation into the loop, it has to be sufficiently localised such that the plasma at the loop top is not reheated before it condenses and it has to last long enough and/or be frequent enough to accumulate a sufficient amount of evaporated plasma at the loop top.

Up until now we have known two distinct types of coronal rain: A quiescent coronal rain occurs in coronal loops that show no flaring activity and is a result of steady and sustained heating. As this heating is operating continuously, this type of rain often recurs several times in the same coronal loop, undergoing what we call "heating-condensation cycles." A flare-driven coronal rain occurs as an aftermath of a large solar flare, and involves much greater rates of mass and energy exchange than in the quiescent scenario. In this case the main source of heating is non-thermal electron beams accelerated during the flare which collide with the chromosphere and heat the chromospheric footpoints. As flares occur sporadically, this type of rain occurs as an isolated event. New observations however show that the whole picture is not quite as simple.

What have we observed?

On 9 December 2015, the IRIS spacecraft observed a partial eruption of a cool plasma prominence in an active region at the limb (Ref. [1]). Several twisted prominence threads can be seen to erupt and appear to reconnect with surrounding open and closed magnetic fields. One of the short coronal loops involved in the reconnection can be observed to cool down immediately after the reconnection. This leads to the formation of several coronal rain condensations, which then fall down towards the loop footpoints. Both the amount and speed of the condensation plasma matches values typically seen in previous observations of quiescent coronal rain. The instability timescale (i.e. the time it takes the rain to form after the onset of the heating) is however much shorter. This is a consequence of the heating being much stronger and the unstable loop being short, which means it takes less time to fill it with hot plasma. 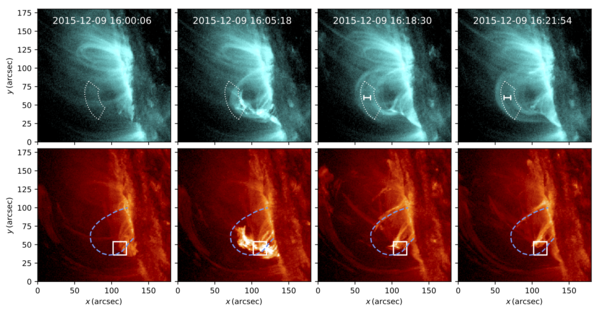 Figure 1: Evolution of the unstable loop in the hotter 131 Â channel (top) and cooler 304 Â channel (bottom). Following the reconnection event the loop first heats suddenly, then rapidly cools while forming condensations. After the coronal rain has formed, the evacuation of the loop can be observed as a dimming of the central part of the loop in 131 Â channel.

Imaging data obtained from RHESSI (Figure 2), which responds to emission from hot plasma at several million Kelvin, suggests that most of the high-temperature emission is coming from the reconnection site and not from the footpoints, thus eliminating the non-thermal electrons as the source of heating. 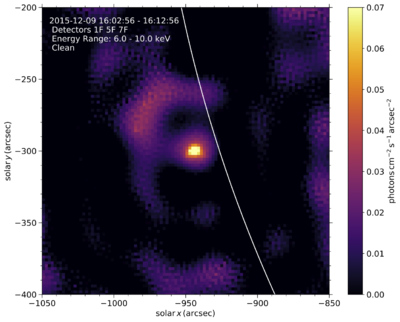 Why is this important?

Our observations suggest that the coronal rain formation was triggered by the reconnection event, which acts as a source of impulsive heating at the reconnection site. The coronal rain event (SOL2015-12-09T16:07) is transient and does not recur, contrary to the quiescent rain scenario. It shows that the thermal instability can result from an impulsive heating event localised anywhere along the loop, and not just in the loop footpoints as previously assumed.

A few open questions however remain. Does the impulsive heating initiate large-scale flows along the loop that increase the density in the loop sufficiently to trigger the thermal instability and the formation of the coronal rain? Or does the reconnection simply act as a perturbation that sends an overdense loop which was already marginally stable prior to the reconnection into the runaway cooling regime? Only MHD simulations can shed more light into what is actually going on.

Our observation nevertheless shows that impulsive heating events can be responsible for coronal rain formation and we have to account for this in our coronal loop models.