Cosmic Rays over the Rainbow Bridge

Cosmic rays come in two varieties: those from the Galaxy at large (GCR), and the "solar cosmic rays," now generally called SEPs. SEP's have not been observed at energies above ~20 GeV while GCR's extend famously to 100s of EeV.

The GCR are quite remarkable: their Milky-Way-averaged energy density is greater than that of starlight, the cosmic microwave background, or an assumed magnetic field of 1 μG. Integrated over the whole Galaxy, their total energy amounts to a non-negligible fraction of the rest-mass energy of the stars themselves - the equivalent, roughly, of the mass of our Galaxy's central black hole. This all means that they are not only interesting, but sort of important. Around the Earth, however, they mainly serve as messengers, arriving almost exactly isotropically and penetrating into our atmosphere to the mean depth of the Regener-Pfotzer maximum at about 60 gm cm-2. A first description of their behavior near the Earth is given by the "Størmer Problem", more precisely the difficult problem of characterizing particle trajectories in a dipole magnetic field. The Sun's magnetic field is not dominated by the dipole term so a "Solar Størmer Problem" would not be such a useful exercise, but we do want to understand cosmic-ray interactions better, as observations improve. For background please see Ref. [1].

One immediate motivation for improving our understanding is the availability now of Fermi observations of two or three distinct sources of high-energy γ-rays from the vicinity of the Sun (Ref. [2]). But equally, we are now getting better tools to work with, specifically in the area of modeling solar atmospheric structures. In the past, we were largely stuck with the 1D "semi-empirical" static model atmospheres, but now MHD simulations such as the Bifrost (Ref. 3)] 3D time-dependent models are available and improving.

Cosmic rays across the Rainbow Bridge

Accordingly, we have taken a first step towards incorporating cosmic rays into a Bifrost model (Ref. [4]). Here we colorfully identify the chromosphere with the "Rainbow Bridge" connecting Midgard with Asgard, the homes of humans and the gods, respectively. Since cosmic rays arrive from infinity as they are guided by heliospheric "open" fields, we selected only field elements at the top of the simulation box (14 Mm), well above any canopy (Figure 1). 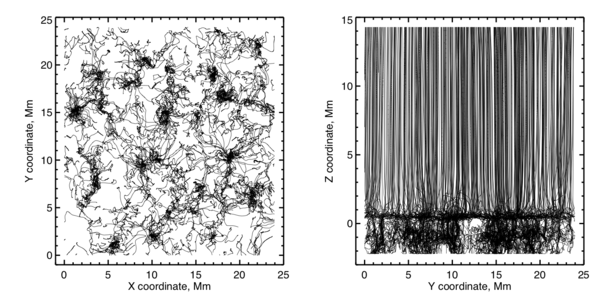 Figure 1: Two cross-sections of the Bifrost snapshot used in Ref. 4]. The model has an imbalance of 5 G, and so it reasonably resembles a coronal hole. Since these fields reach out into the heliosphere, we would expect sufficiently sensitive γ-ray observations to reveal coronal holes to be bright sources at high energies (above, say, 20 MeV).

At each of 512 randomly selected points, starting at 14 Mm, we (meaning colleague Mikolaj Szydlarski) traced the magnetic field down into the photosphere. Particles of energies in the GeV range will nominally follow the field adiabatically, and so this tracing shows us where particles can interact with solar material. This interaction is limited by the particle range against collisional ((Coulomb)) interactions. The particle ranges are great enough so that primary cosmic rays can readily penetrate well below the photosphere itself, but that γ-ray secondaries from most of the range cannot escape because of Compton scattering. Note that the cross-sections for nuclear interactions are much smaller than the Coulomb cross-sections, which therefore dominate. Since the field strength tends to increase with depth (but not always monotonically), magnetic mirroring will play a major role in the fates of the cosmic rays. Rather than, "how do enough photons escape from the particles' vertical stopping depths?", the question may be, "how do the incident GCR's encounter sufficient column depth to account for the observed Quiet Sun gamma-ray fluxes?"

The result of this tracing is interesting, because it shows much more varied and complex behaviour than existing cartoons. Many - not all - field lines do develop a substantial horizontal component, but with a much greater range of heights and angles than seen in simple "canopy" configurations. Figure 2 shows the relationship between gas pressure and magnetic field for the chosen open field lines. In static equilibrium this might be expected to show P ~ B2, but the results differ strikingly. No simple relationship exists. 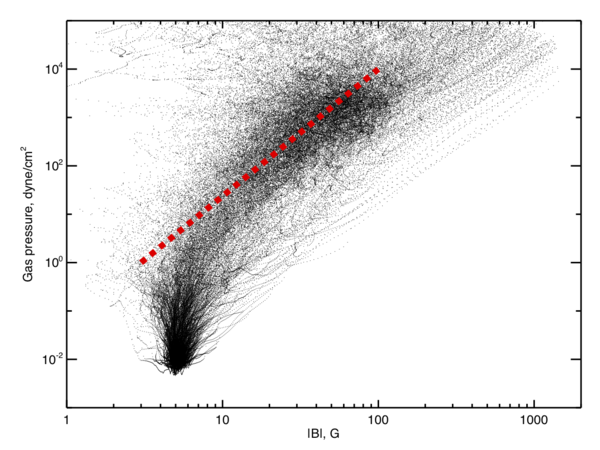 Figure 2: Relationship between gas pressure P and magnetic field intensity B for the open field lines. Note that up and down are inverted here; the coronal domain is at the bottom. The red dots show P ~ B2.7, but the main message is that any given flux tube can show a widely different behavior.

A first look at cosmic-ray access to the lower atmosphere and photosphere, based on modern MHD modeling, suggests that particles can lose their way en route, and this will affect their radiation patterns (the γ-ray limb-darkening law). We now have the resources with which to examine many of the physics problems that depend upon this access, such as line intensities, line profiles, SEPs access, chemical abundances etc.; probably the next step would be to apply a comprehensive nuclear-interaction code such as GEANT to some of these problems. We note that the Bifrost modeling at present is just representative, rather than "data-driven" for a particular configuration, but it seems likely that the configurations specific to individual SEP events can be treated with forthcoming code improvements.

[1] "Signatures of Cosmic-Ray Interactions on the Solar Surface"

[4] "Cosmic-Ray Interactions in the Solar Atmosphere"