Spectropolarimetric Insight into Plasma-Sheet Dynamics of a Solar Flare

In this Nugget, we present observational evidence for the presence of unobservably small magnetic structure, consistent with plasmoid-fragmentation within a dynamically evolving current-sheet in the wake of a coronal mass ejection. We show that the magnitude of linear polarization is sensitive to unresolvable small-scale magnetic structures (Ref. [1]).

In the corona, current sheets are predicted to occur with a width far below the observable limit of even the best coronal instruments. However, there have been many reports of thin columns of hot plasma associated with eruptive flares, interpreted as heated plasma around an edge-on current-sheet. These are perhaps associated with the site of magnetic reconnection in the classical 2D eruptive flare. Perhaps the brightest and longest-lived such observation to date was associated with an X8.2-class flare on September 10th 2017 from AR 12673, the subject of many other Nuggets.

While there has been indirect evidence for the presence of instabilities within the plasma-sheet of the September 10th 2017 flare (Ref. [2],[3]), none of the evidence has provided clear insight into the nature of the plasma-sheet magnetic field and its role in the onset of turbulence. Direct observations of the magnetic field may be a crucial clue to our understanding of magnetic reconnection in this and similar events. Fortunately, linear polarization measurements of the plasma-sheet by the CoMP instrument on Mauna Loa can give us an insight to this crucial magnetic configuration.

In AIA 193 Å (Figure 2AB) emission, the plasma-sheet appears as a near-horizontal structure, stretching out from the top of the flare loop arcade. In contrast, the linear polarization P (normalised by intensity) reveals a prominent dark triangular structure, above which is a broad, dark region, roughly aligned along the AIA plasma-sheet emission (Figure 2CD). A cross-section through the plasma-sheet region shows a significantly broad and gradual drop in polarization down to P < 0.01, with the minimum P occurring at approximately the same location as the peak AIA 193 Å emission. 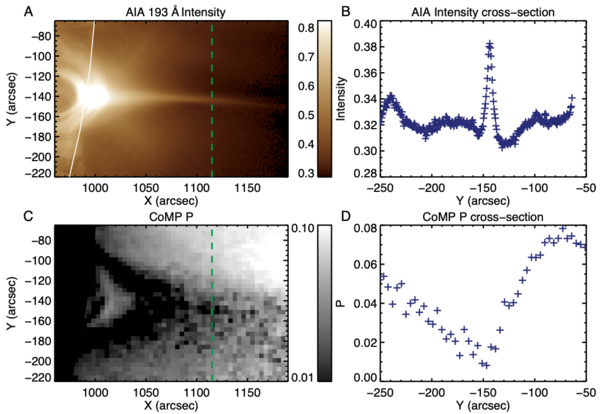 Linear polarization is created throughout the solar corona, proportional to P ∝ 3cos2(θB) 1, where θB is the angle between the magnetic field and incident solar radiation (θB = 0 for a radial field) (Ref. [4]). There are only two mechanisms by which linear polarization can be reduced, collisions by thermal particles or by variations in θB across in the LOS and across the POS. We calculate that the density within the plasma-sheet is not large enough to destroy polarization via collisions, meaning that variations in B must be responsible.

Small-scale magnetic structures, such as plasmoids or a turbulent magnetic field (formed perhaps as a result of current-sheet instabilities), naturally lead to variations in θB. These structures would therefore cause an overall reduction in P, especially if unresolved. To explore such an effect, we made simple numerical models using CLE to compare with observations. Figure 3A shows the geometry of a Sweet-Parker current sheet, with a magnetic field direction close to radial. Such a magnetic configuration is simply not capable of producing the low polarization levels we see in this event. Contrarily, our POS plasmoid model (Figure 3C) causes a drop in polarization down to P = 0.01. Although these models are relatively simple, they provide an analogue for the polarization levels CoMP might observe for representative magnetic topologies. In the plasmoid case, magnetic field orientation is shown to be capable of reducing polarization to levels observed in this event. With future observations (given an adequate signal-to-noise and integration time), spectropolarimetric measurements can provide observational constraints for the theoretical nature and scale of magnetic substructure in the corona. 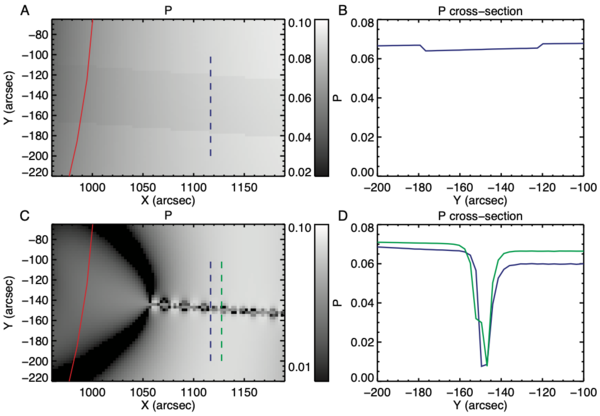 Figure 3: Maps of linear polarization P for plasma-sheet models, with associated cross-sections. CoMP occulting disk position is marked by the red curved line. Cross-section locations are marked by the blue and green dashed lines, corresponding to the plot color of the cross-section. Models show: AB) Laminar plasma-sheet, with magnetic field parallel to the sheet direction. CD) Potential field model generated from infinite LOS line currents placed at unresolvable intervals along the plasma-sheet, combined with a sub-surface dipole. This represents plasmoid reconnection within the current-sheet.

We find that the drop of linear polarization measured by CoMP in the September 10th 2017 flare is consistent with the presence of plasmoids and turbulent fluctuations in the magnetic field. While previous work has focused upon spatially resolvable features in images of the dynamic corona, we have shown that linear polarization can serve as measure for random magnetic structure on sub-resolution scales. Our method provides a diagnostic to analyze the fragmentation of current sheets through the plasmoid instability, which creates a cascade of energy associated with magnetic-field fluctuations toward smaller scales, well below observable limits. Our work is consistent with theoretical work suggesting the links between current-sheet dynamics, plasmoid fragmentation, and a turbulent cascade of energy associated with magnetic-field fluctuations. We anticipate that the start of observations with DKIST will provide data of the necessary quality to further disentangle the intriguing physics discussed here. Further details can be found in our recently published paper (Ref. [1]).

The co-authors of Ref. [1] (Philip G. Judge, Sarah A. Matthews, and Lidia van Driel-Gesztelyi) are fully complicit in this Nugget.

[1] "Spectropolarimetric Insight into Plasma-Sheet Dynamics of a Solar Flare"

[3] "Observations of Turbulent Magnetic Reconnection within a Solar Current Sheet"