Solar and stellar flares are energetic events in their respective solar and stellar atmospheres. "Superflares" are very powerful flares that have total energies of 10 to 104 times greater than that of the biggest solar flares, taken here to mean a GOES X-ray class X10 and a total white light energy 1032 erg; see an earlier Nugget for a good example of a superflare, but on an M star, rather than a strictly solar-type one. Recent Kepler space telescope observations have now showed more than 1000 such superflares on a few hundred solar-type stars (Ref. [1], [2]). These superflare stars show quasi-periodic brightness variations with periods from one to a few tens of days, and these variations are thought to be caused by the rotation of a star with large starspots or large active regions (Ref. [3] and Figure 1). Our previous statistical studies of these data (Ref. [2],[3]) suggested that superflares with energy up to 1035 erg could occur on stars rotating as slowly as the Sun (rotation period about 25 days) once in a few thousand years. However, these results were only based on Kepler photometric data.

Figure 1: Left: The brightness variation of a solar-type superflare star (from Kepler data). In addition to the sudden brightenings caused by flares, quasi-periodic brightness variations with periods of about 15 days are seen. Right: An imagined image of a superflare star as seen from close up, with a huge flare (white) mammoth starspots (black). (Credit: Kyoto University)

More detailed investigations could confirm whether the above brightness variation is really caused by the rotation, and whether superflares can really occur on slowly-rotating single solar-type stars similar to our Sun. If so, perhaps the Sun itself could produce a superflare, even if only very infrequently.

First, we have conducted spectroscopic observations of Kepler solar-type superflare stars (64 stars in total) using Subaru/HDS and the Apache Point (APO) 3.5m telescope (as initially reported in an earlier Nugget and Ref[4]). We found that more than half (43) of the 64 target solar-type superflare stars are "single" stars, and that their atmospheric parameters (temperature, surface gravity, and metallicity) lie within the range of ordinary solar-type stars. The measurements of v sin(i) (the projected rotational velocity) and chromospheric lines (Ca II H&K and Ca II 8542A) support the explanation for the the brightness variation of these stars is caused by the rotation of a star with large starspots

The recent Gaia-DR2 stellar radius data have suggested the possibility of severe contaminations of subgiant stars in the classification of Kepler solar-type (G-type main-sequence) stars used for our previous statistical studies of superflares. Confusion with faint foreground or background stars (that flare) could be a problem in identifying a superflare star as truly of solar type.

Thus in our new study (Ref. [4]) we have investigated again the statistical properties of Kepler solar-type superflare stars by incorporating Gaia-DR2 stellar radius values. More than 40% of the original solar-type superflare stars in our previous studies are now classified as subgiant stars and have been rejected from the statistical results, shown here in Figure 2. 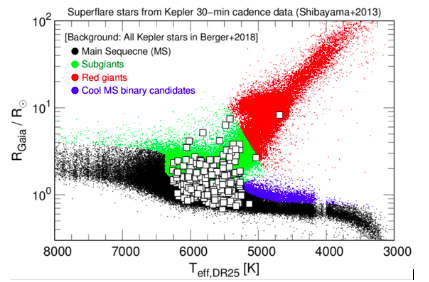 As a result, the maximum superflare energy continuously decreases as the rotation period Prot increases. Superflares with energy ~ 5 x 1034 erg would occur on old slowly-rotating Sun-like stars (Prot about 25 days) once in approximately 2000 - 3000 years (Figures 3 & 4). In contrast, superflares up to 1036 erg can occur on young rapidly-rotating stars (Prot of a few days) (Figure 3), and the flare frequency of such young rapidly-rotating stars is at least 100 times higher (e.g., 5 x 1034 erg flares occur at least once in 20-30 years) compared with the older slowly-rotating Sun-like stars (Figure 4). The maximum starspot area does not depend on the rotation period when the star is young and rapidly rotating, but as the rotation slows down, it starts to steeply decrease at Prot ~12 days for Sun-like stars.

Figure 3: Left: Scatter plot of the flare energy (Eflare) vs. the rotation period (Prot) of superflares newly calculated using Gaia-DR2 stellar radius. They are separated on the basis of the stellar temperature values: Teff = 5100-5600 K and Teff = 5600-6000 K. We add the scale of stellar age (t) on the basis of the gyrochronology relation of solar-type stars (see Ref. [4] for details). Right: Occurrence frequency distribution of superflares as a function of the rotation period (Prot). The vertical axis indicates the number of superflares with energy of 5 x 1034 erg per star and per year. The data are classified with stellar temperature.

These two decreasing trends can be consistent since the magnetic energy stored around the starspots could explain the flare energy, but other factors like spot magnetic structure should be also considered. In addition, the size distribution of starspots on Sun-like stars between Aspot = 0.003-0.1 ASH, with areas ASH in units of one solar hemisphere) roughly locate on the extension line of the distribution of sunspot group between Aspot = 0.0005-0.003 ASH . The upper limit of starspot size values on slowly-rotating Sun-like stars would be roughly a few times 0.01 ASH and the appearance frequency of such spots would be once in approximately 2000-3000 years. 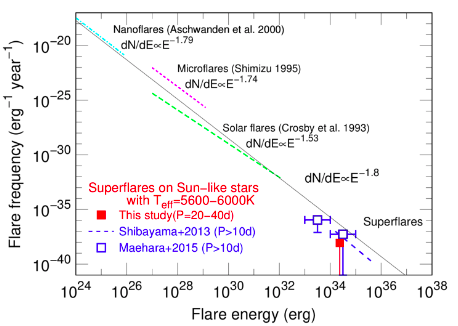 Figure 4: Occurrence frequency distributions for solar flares and Kepler superflares, showing both to be consistent with the same power law (see Ref. [4] for details).

These series of results presented in this work support the idea that even slowly-rotating stars similar to the Sun can have superflares with an energy of more than 1034 erg once every few thousands years. As a next step, it is important to conduct more detailed studies on long-term activity changes of superflare stars, the physical mechanisms of their flares, and especially whether large particle events or CMEs can occur in association with such energetic flares.

[2] "Superflares on Solar-type Stars Observed with Kepler. I."