In the standard solar flare scenario, a large number of particles (electrons and protons) are accelerated in the solar corona. Radiative signatures of these particles are found in both X-ray and radio wavelengths, telling us that the particles are non-thermally distributed in energy. Assuming that the same distribution of particles causes both X-ray and radio emission, one would expect a tight relation between these the two emission types. Indeed, millisecond decimeter spikes have been found to have a strong temporal association rate with hard X-rays (see our earlier Nugget).

But what about the spatial relation? Sticking to the picture of a coronal acceleration site, one may expect coronal X-ray emission and radio spikes to originate from the same positions.

By combining RHESSI observations (positions of X-ray sources) with Phoenix-2 data (which provides the identification of the radio spikes) and observations from the Nançay Radioheliograph (which shows the locations of the radio emission in 4 discrete frequencies) in a particularly well observed limb event, we can find - at least one - answer to the above question. Figure 1 shows the radio spectrogram and the thermal and non-thermal X-ray light curves of an event that occurred on August 23 2005. The spikes were observed in the impulsive phase, when the soft X-ray emission was still rising. However, the radio emission is not clearly correlated in time with the details of the hard X-ray lightcurve. 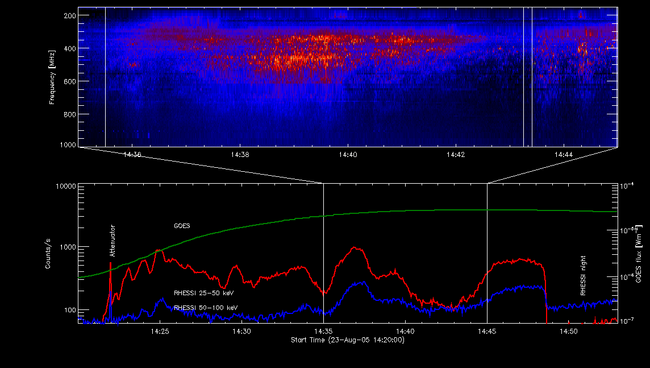 Figure 1 (left): "Top": Phoenix-2 spectrogram. Narrowband radio spikes occurred during most of the displayed time, but two distinct intervals can be distinguished as designated by white vertical lines in the spectrogram. "Bottom": RHESSI light curves of non-thermal emission and GOES light curve of the 1-8

Now let us have a look at the spatial relations. Figure 2 shows soft X-ray images overlaid with hard X-ray contours and the location of the centroid positions of the Nançay radio data at the three highest frequencies.

Figure 2 (left): The geometry observed for the two intervals defined in Figure 1. The RHESSI contours of the hard X-ray "coronal" sources at 18-22 keV are shown in light blue and at 6-12 keV (thermal) in red. "Footpoint" sources at 25-50 keV are shown in dark blue contours. GOES/SXI images taken during time intervals of spike activity are underlaid in green. The time averaged centroid positions of the spikes as observed with Nancay are indicated with different symbols for the frequencies that had spike activity. The error bars give the standard deviation of the individual source positions. The arrow points in the direction of a CME observed by LASCO 10 minutes after the spike observations.

The Nugget reader should be informed that sizes of radio sources are always very large, in our case larger than the beams. They have sizes of typically more than 2 arcminutes. The blurring is generally supposed to be the result of scattering in the corona. As the signal-to-noise ratios are good (up to 100), the centroid can still be determined to within less than 10 arcsecs typically. The error bars in Figure 2 show the standard deviation of the radio peak centroid distribution. The distribution of the centroids is well-confined compared to the source size, indicating that the scattering is relatively stable in time. Scattering generally moves the position of the radio emission to higher altitudes. Furthermore, the radio centroid positions are not found radially above the coronal X-ray source. In fact, the low and high frequencies are displaced from each other horizontally, not radially. These properties are difficult to explain with scattering alone.

The data suggest that decimetric spikes do not originate from coronal X-ray flare sources, contrary to previous expectations.

So, what is going on? The X-ray and radio emission do occur in the same flare but not even remotely from the same location. The spike observations indicate the presence of non-thermal electrons, possibly originating from an additional, spatially separated energy release site in the high corona. Considering that the spikes occur during the impulsive phase, there appears to be a causal link, direct or indirect, between the spikes and the main flare energy release near or inside the X-ray coronal source.

A paper on this observation (by Battaglia and Benz) is in print as a Letter to Astronomy and Astrophysics.

Biographical Note: Arnold Benz is Professor at ETH Zurich, Switzerland. Marina Battaglia is a Leverhulme Research Fellow at the University of Glasgow, Scotland.