Most of the gamma-ray lines observed by RHESSI result from the impacts of primary energetic particles (proton, alpha, or heavy) on nuclei such as 12C or 16O). After the impact, energy transferred to the nucleus in the inelastic scattering event can reappear as a prompt gamma-ray photon. Almost all of these lines are at energies below about 8 MeV. A notable exception is a nuclear de-excitation line of 12C that is predicted to appear at 15.11 MeV but has never been observed in a flare. Interest in this line has been renewed recently by a paper reporting that "a spectral feature was observed in the region of 15 - 21 MeV" during the 20 January 2005 flare (Arkhangelskaja et al. 2009; Arkhangelskaja et al. 2009; Arkhangelskaja et al. 2008 ). The observations were made with the AVS-F apparatus on the Russian CORONAS-F mission.

Interest in the gamma-ray line at 15.11 MeV was originally generated by Crannell et al. (1979), who showed that it is expected to be the strongest and most isolated of any line feature in the gamma-ray spectrum above 8 MeV. It is produced primarily in direct interactions between accelerated protons (p) and carbon nuclei (12C):

Interactions with oxygen nuclei (16O) can also produce a gamma-ray line with identical energy but its contribution will generally be smaller:

The flux of this line relative to the flux of the other carbon nuclear de-excitation line at 4.4 MeV is a sensitive diagnostic of the accelerated particle spectrum in the tens of MeV range. Information on the flare particle spectrum in this energy range is extremely difficult to obtain by any other means. Motivated by this potential, the RHESSI energy coverage was extended to 17 MeV, even though it was recognized that the decreased sensitivity of the germanium detectors at these high energies would make the line detection at the expected fluxes very difficult given the gamma-ray continuum emissions in the same energy range from electron-proton bremsstrahlung and the decay of neutral pions. AVS-F uses a thallium-activated cesium-iodide (CsI(Tl)) scintillation detector, 20 cm in diameter and 10 cm in height, surrounded by a plastic anticoincidence shield. Thus, although it has far poorer energy resolution than RHESSI, its overall gamma-ray sensitivity should be similar to that of RHESSI's nine 7 cm dia. x 8 cm deep germanium detectors.

The predicted 15.11 MeV to 4.44 MeV flux ratio depends strongly on the spectral index (s) of the accelerated protons. It varies over two orders of magnitude from 10 − 2 for s = 2 to 10 − 4 for s = 5 as long as the proton spectrum extends down to below a few MeV. This attractive dependency is the result of the different proton threshold energies needed to excite the carbon nuclei to the required energy state to produce the two lines - ~5 MeV to produce the 4.44 MeV line and ~20 MeV for the 15.11 MeV line. The cross-sections to produce the two different lines are shown in Figure 1 as a function of the kinetic energy of the exciting proton. 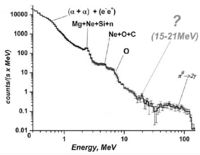 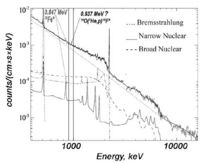 The superior energy resolution of the RHESSI germanium detectors is obvious from the sharp 2.223 MeV neutron capture line in the RHESSI spectrum and the broad feature labeled "Mg+Ne+Si+n" in the AVS-F spectrum peaking at the same energy. The carbon line at 4.4 MeV and the oxygen line at 6.6 MeV appear as broad features in both spectra. This is because they are the combinations of the relatively narrow lines produced by interactions of accelerated protons on essentially stationary ambient carbon atoms plus the Doppler-broadened lines from interactions of accelerated carbon nuclei on ambient protons. The spectra include two additional peaks from the escape of one or both of the two 511 keV photons produced from pair-production interactions in the detectors. The feature of interest here, however, is marked "(15-21 MeV)" on the AVS-F spectrum. The authors claim that this feature was observed at the 2.5-sigma level in the spectrum averaged over a broad seven minute time interval from 06:44:52 to 06:51:16 UT and at the 3-sigma level in a shorter 2-minute period within that interval from 06:47:00 to 0649:08 UT. They suggest that this feature is the 15.11 MeV line but that it may also include a line at 20.58 MeV from the decay of 4He produced by neutron capture by 3He. This is analogous to the production of the much stronger 2.223 MeV line through the decay of deuterons produced by neutron capture by protons. In any event, the flux ratio of this "15-21 MeV" feature to the 4.4 MeV line is ˜5x10 − 3 corresponding to a plausible proton spectral index of between 2 and 3.

Clearly, this tantalizing measurement cannot be taken as proof that the 15.11 MeV line has finally been detected but it does show that we are perhaps within striking distance. It should motivate us to re-examine RHESSI gamma-ray spectra from other flares comparable to and more intense than the 20 January 2005 event. Also, it heightens interest in future gamma-ray observations, when prospects are good for more definitive measurements as solar activity increases towards the next maximum and we get more intense gamma-ray flares. Two new gamma-ray instruments are now observing with greater sensitivity in this energy range than ever before - the Gamma-ray Burst Monitor (GBM) on the Fermi Gamma-Ray Space Telescope (launched on June 11, 2008) covers the energy range up to 30 MeV with bismuth germanate (BGO) scintillator detectors, and the high energy radiation spectrometer (NATALYA-2M) on the Russian CORONAS-Photon mission (launched on January 30, 2009) also covers this energy range with large thallium-activated cesium-iodide (CsI(Tl)) scintillator detectors.

This Nugget is dedicated to the late Carol Jo Crannell, a RHESSI Co-I and leading proponent of the 15.11 MeV line, who passed away on 10 May 2009.