Energy transport by accelerated particles in the quiet solar atmosphere

Signs of energetic particles, typically non-thermal electrons, are observed in flaring events of all sizes on the Sun. Their presence is given away by the hard X-ray bremsstrahlung emitted when they collide with the ambient plasma. The accelerated particles come from locations where stresses in the coronal magnetic field are relaxed through the process of magnetic reconnection. Strong electric fields and turbulent motions arising during the reconnection event can accelerate plasma particles out of thermal equilibrium. The resulting beams of particles expelled along the magnetic field can carry a considerable fraction of the released magnetic energy.

Simulations exploring the effects of energetic particles are becoming increasingly sophisticated, but have so far mainly involved 1D models of the solar atmosphere. With the help of more realistic 3D MHD numerical simulations of the solar atmosphere, it is possible to provide an evolving environment where large numbers of particle beams emerge spontaneously, and the plasma responds to their collective deposition of energy. This requires the incorporation of a particle acceleration and transport model into the existing simulation framework. In Ref. [1], we present a simple approach that can be regarded as the first step towards this goal. We study the resulting energy transport via electron beams in a "Bifrost" (Ref. [2]) simulation of flux emergence on the quiet Sun.

Our treatment of energetic particles can be summarised as follows. A beam of accelerated electrons is assumed to originate in every grid cell in the simulation domain that exhibits magnetic reconnection. This is detected using a heuristic for non-conservation of the topology of the magnetic field lines. Based on local conditions at each of these reconnection sites, a simple parametric acceleration model determines the energy distributions of the resulting non-thermal electrons. These are propagated along the magnetic field lines passing through the grid cells, and at every step of the way, the heating of the local plasma is computed from the mean energy loss of the beam electrons due to Coulomb collisions.

The net transport of energy by the electron beams in a snapshot of our simulation is shown in Figure 1. Elongated acceleration regions (blue areas in the figure) are produced throughout the corona, at locations where expanding magnetic bubbles collide with each other and with the overlying horizontal field. The total power of all the accelerated electron beams amounts to roughly 1024 erg/s. Most of this energy is deposited in the corona. About 1% of the energy makes it to the chromosphere, primarily through bundles comprised of many beams converging with depth. It is worth noting that these beams sometimes come from completely separate acceleration regions, an effect that could show up in observations as a mix of signatures from different electron distributions. 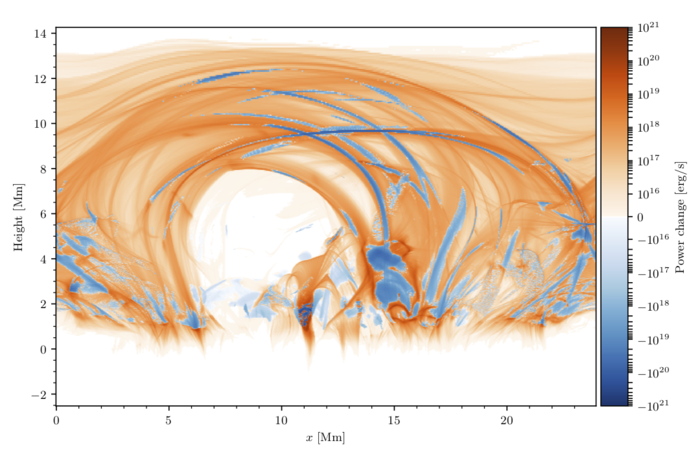 Figure 1: Change in heating power in each grid cell due to the inclusion of acceleration and transport of non-thermal electrons. The bottom of the simulation domain lies in the convection zone, 2.5 Mm below the photosphere, while the top lies in the corona, 14.3 Mm above the photosphere. The power changes are accumulated along the y-axis of the simulation snapshot. Blue regions indicate a net reduction of thermal energy compared to the case without non-thermal electrons, which is due to a fraction of the local reconnection energy being injected into accelerated electrons instead of heating the ambient plasma. Orange regions show where the non-thermal electron energy eventually is deposited into the plasma as heat.

A prominent strand of converging beams typically delivers between 1020 and 1023 erg/s of non-thermal energy to the transition region and chromosphere. Together, they produce a large number of heating events, with energies on the scale of "nanoflares" (one billionth the energy of one unit flare, at 1032 erg). Although these events probably are too weak to drastically alter the evolution of the plasma, the deposition of energy well below the transition region could expand the local plasma enough to accelerate the overlying plasma upward. In synthetic spectra, these upflows could be evident as blueshifts of lines such as Si IV. These blueshifts would not be present in a similar situation without beams, because energy would only be transported from the corona by thermal conduction, which is not effective below the transition region.

The average beam heating along three sets of beams converging in the lower atmosphere is shown together with the corresponding conductive heating in Figure 2. In all three cases, conductive heating exceeds beam heating by 1-2 orders of magnitude in the upper transition region. However, as the temperature drops with increasing depth, thermal conduction becomes insignificant and electron beams dominate the energy deposition. The figure also demonstrates that the steepness of the initial electron energy distribution, parameterised by a power-law index δ, is highly important for the ability of the beams to penetrate the lower atmosphere.

Figure 2: Horizontal averages of heating due to electron beams and thermal conduction with height along three selected sets of electron trajectories converging in the lower atmosphere. The averages are taken over the grid cells for which the aggregated beam heating exceeds its 75th percentile within each horizontal layer. The dashed line shows the corresponding average temperature profile. We note that the height axes have the same extent, but separate bounds.

Due to the relatively low magnetic activity in the MHD simulation employed, the hard X-ray bremsstrahlung emitted by the resulting electron beams would not be detectable with current instruments, ruling out the most direct comparison with observations for now. However, when larger and more active simulation runs become feasible, this may change. In the meantime, the influence of beam heating on synthetic chromospheric and transition region spectral lines can be compared with observations from instruments such as IRIS.