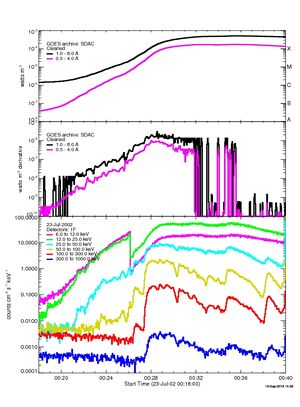 Every Geostationary Operational Environmental Satellite (GOES) since 1976 has carried an X-Ray Sensor (XRS) consisting of two ionization chambers to measure the total solar flux in two wavelength bands, 0.5 - 4 and 1 - 8 Angstroms. These measurements are recorded every 3 s (2 s since 2 December 2009). They have been extremely valuable in providing a largely uninterrupted record of solar activity over the last 40 years. The absolute sensitivities of the instruments on the different spacecraft have been kept remarkably constant and the ABCMX flare classification scheme, based on these data, has become a standard. An IDL user-friendly GOES Workbench is available to plot the light curves for any time interval with or without background subtraction. The temperature and emission measure of the emitting flare plasma can also be readily estimated from the two-channel measurements assuming that the emitting plasma is all at the same temperature and has coronal abundances (Ref. 1).

Initially, it was thought that the soft X-ray light curves as measured by GOES XRS were not particularly informative. The typical light curve rises relatively slowly during the impulsive phase seen in hard X-rays or microwaves. An example is shown in the top plot of Figure 1. After reaching a peak near the end of the impulsive phase, it falls roughly exponentially with a somewhat longer time scale than on the rise. Our colleague Werner Neupert had noted that the soft X-ray rise was comparable to the time integral of the microwave flux. We then showed that a similar relation existed between soft and hard X-rays for some flares (Ref. 2). This relationship became known as the Neupert Effect. It can be best visualized by displaying the time derivative of the soft X-ray light curve as shown in the middle plot of Figure 1. This time derivative has been used as a proxy for the hard X-ray or microwave light curves when they are not available.

The common explanation for the Neupert Effect is that the hard X-rays and microwaves are generated by electrons accelerated during the impulsive phase to 10s - 100s of keV and that these same electrons heat plasma to temperatures of ~10 to 50 MK that then radiates in soft X-rays. Since the heating can be very rapid, on timescales of seconds or less, while the plasma cooling time is likely to be much longer, the amount of hot plasma accumulates with time during the impulsive phase. Hence, at any given time during the flare, the amount of hot plasma and the soft X-ray flux emitted by it tends to be proportional to the total energy of all the electrons that have been accelerated up to that time (Ref. 3).

Figure 1 shows the GOES light curves and their time derivatives for the X-class flare on 23 July 2002. Although the light curves, plotted here on a log scale, appear perfectly smooth, the time derivative reveals much detailed structure on the rise. When this event occurred, it was not clear if this fine structure was real or some type of artifact of the GOES data. It has now become certain, based on comparisons with simultaneous observations made with other instruments viewing similar wavelength ranges, that much of this fine structure is real and of solar origin. It was also difficult to determine how closely the time derivatives matched the hard X-ray time profiles shown in the bottom plot of Figure 1. This was because, prior to 2010, the ability to detect the soft X-ray fine structure was severely compromised at fluxes exceeding ~10-4 Watts m-2 because of the automatic increase in the flux bin size at that level. This is evident in Figure 1, where the time derivative after ~00:29 UT suffers from this coarse digitization at the high flux levels. This problem has been eliminated (and the time cadence has been improved from 3 s to 2 s) with advanced XRS electronics on GOES 13, 14, and 15. Now, any detailed structure in the time derivatives can be detected for even the most intense flares, when the signal-to-noise level is the greatest, and compared with the hard X-ray time profile. 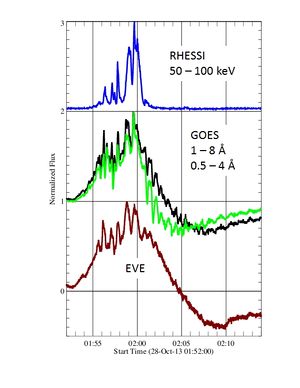 An excellent example of the capabilities of the soft X-ray detector on the latest GOES spacecraft (GOES 15) is shown in Figure 2 for the flare that occurred on 28 October 2013. The RHESSI 50 - 100 keV hard X-ray light curve is shown on the same time axis as the time derivatives of the GOES and EVE/ESP light curves. Level 1 data were used from the EVE/ESP quad Si photodiode, which is sensitive in the 0.1 to 7 nm bandpass. This event has 5 or 6 sharp peaks in the hard X-ray light curves between 01:55 and 02:01 UT and the same number of peaks in the three time derivative curves showing a clear case of the Neupert Effect. However, more peaks are evident in the GOES time derivatives after this time and continue well into the decay of the event at least until 02:14 UT. Some of these are seen in the EVE/ESP time derivative curve as well but not all, presumably because the quad diode is more sensitive to lower temperature plasma than is GOES/XRS. But the question remains whether all of the structures seen in the GOES time derivative curves are real and of solar origin, particularly in the late stages of the event when the signal-to-noise level decreases, or are there problems in the new XRS instrument that are causing the observed fluctuations? 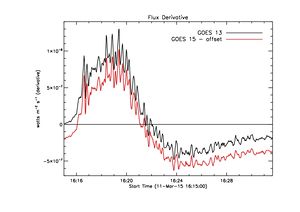 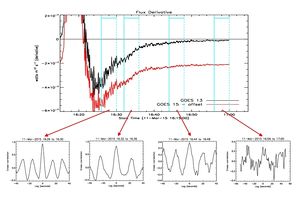 The solar origin of structure in the GOES time derivative light curves during the decay phase of flares has now been convincingly demonstrated since January 2015, when data from both GOES 13 and GOES 15 have become available for the same flares. Figures 3 and 4 show the time derivative of the light curves obtained simultaneously with GOES 13 and GOES 15 for the event on 11 March 2015. The soft X-ray detectors on these two spacecraft are nominally identical with the same flux digitization and readout systems. Consequently, the almost identical detailed structure seen in these two plots must be of solar origin. That there is similar structure in the two light curves, even during the decay phase of the event from the peak at 16:20 UT to as late as 17:00 UT, can be seen in Figure 4 from the cross-correlation plots shown for four time intervals. The clear multiple peaks in the cross-correlation plots show that the average time between peaks in the time derivative changes during this decay phase of the flare from ~16 s to 24 s to 20 s to ~35 s but apparently not in a systematic way.

The properties of the fine structures in the GOES flare light curves can be summarized as follows:

These soft X-ray fine structures seen in the light curves of many flares provide a promising new diagnostic of the flare energy release process. Where there is a clear correlation with similar coincident structures in the hard X-ray and microwave light curves, then it can be strongly argued that the soft X-ray emitting plasma is heated by accelerated electrons at that time. Where there is no correlation, then the plasma must presumably be heated by some other means. The fact that the soft X-ray structures persist into the decay phase, well after the end of the hard X-ray emission, supports the idea that continuous heating is required to account for the relatively slow cooling time in many flares. Presumably, similar direct heating is also taking place during the impulsive phase giving the lack of complete correlation with the hard X-ray emission observed in many flares. Thus, detailed comparisons between the soft X-ray structures with hard X-ray and microwave light curves have the potential for separating temporally the directly heated plasma from plasma heated by accelerated electrons. This can be compared with the spatial separation that has been claimed by Caspi et al. (Ref. 4) for one flare imaged with RHESSI.

Nakariakov and Melnokov (Ref. 5) have divided the possible mechanisms for producing the observed fluctuations into the following general categories:

[2] Dennis and Zarro (1993) "The Neupert effect - What can it tell us about the impulsive and gradual phases of solar flares?"