Flare waiting times depend on their magnitudes

Solar flares occur seemingly at random, but we all believe that they result from the sudden release of energy that has gradually built up inductively in the coronal magnetic field. An early description of this (Ref. [1]) led to many studies that sought in vain for the expected correlation: the longer the buildup, the bigger the flare. Zdenek Švestka and Vic Gaizauskas chaired a major effort, decades ago, termed the "Flare Buildup Study", but could not find the smoking gun (Ref. [2]).

In general the buildup-and-release action falls under the heading of a relaxation oscillation, since such a system can produce a rigorously periodic time series. Not always, though; its originator (Balthasar van der Pol) noted early on that noise-like or irregular properties could also arise. One nice illustration of such a system, implemented mechanically (and often made of bamboo) is the "shishi-odoshi" water feature sometimes found in a Japanese garden.

Searching for a correlation

If the release of stored energy empties its reservoir each time, one would get a very clear correlation between the time before an event, and the magnitude of the event. The event trigger action causing it to happen would be a separate matter. Figure 1 illustrates this schematically, and also illustrates a different form of a simple relaxation oscillation that we describe below.

Figure 1: Two forms of relaxation oscillation: "reset", in the left set of plots; "saturation" in the right set. The pairs of panels at the bottom show the correlations with the times before ("reset") and times after ("saturation") cases.

Instead of emptying the reservoir, the flare event could start from a fixed or slowly-varying saturation level, causing a partial depletion of the reservoir. This is the pattern in the right panels of Figure 1, which we term the "saturation" limit.

Note that these models have no physics, although the "reset" case is very clear (see Ref. [1] and the "shishi-odoshi" link above). For the "saturation" case there seems to be no obvious mechanical realization and it is perplexing: how can the system find a continuous distribution of end states? In the reset case the end state is always the same, and the missing physics dictates the apparently random time of the flare trigger.

Colleague Mike Wheatland has pointed out Ref. [3], which describes a pulsar glitch occurrence pattern for one remarkable pulsar (PSR J0537–691) that neatly matches the "saturation" pattern. So this case does exist in nature.

What do we actually see?

Solar flares surprisingly turn out to provide cases with very solid correlations in the saturation sense. These have been found (Ref. [4]) by using the simplest possible tools: the GOES soft X-ray flare listings. This study looked at two perfectly isolated active regions, following the suggestion of colleague Manolis Georgoulis that this would simplify the bookkeeping and also possibly minimize any physical crosstalk between two independent structures, as might be suspected for neighboring active regions. The two studied were the "last best" regions NOAA 07978 in July, 1997, and NOAA 10930 in December, 2006. The correlations do not persist over the lifetimes of the regions, but occur on several individual days within their lifetimes. Figure 2 shows correlations from a representative one-day interval for the 2006 region, for which several one-day intervals had strong such correlations. 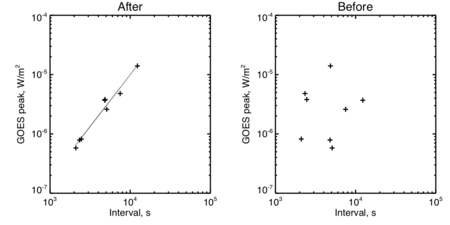 Figure 3 does the same thing for the 1997 region, with the distinction that this particular one-day interval shows the strongest correlation for this region, so it's not a typical case. However the significance levels for these examples by themselves are basically overwhelming, so there is no question about the reality of the preference for "saturation" over "reset" in either example. 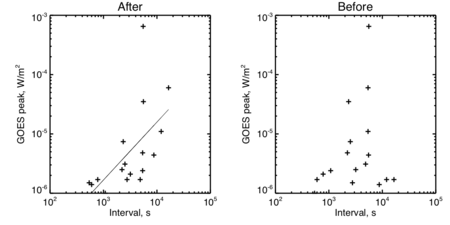 This Nugget has described a solid result, but it only discusses two rather unusual active regions; both had large spots, both occurred at the ends of their sunspot cycles ("last best"), and each was unique on the visible hemisphere. Obviously more extensive analyses will be rewarding, possibly leading to some coronal physics or perhaps a handle on flare prediction (note that the pulsar glitches in Ref. [3] are regular enough for precise forecasting). 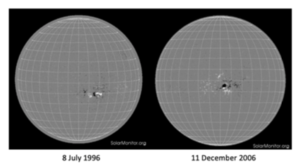 But! A very recent paper suggests a complication. In Ref. [5], a study of the time evolution of the vertical Lorentz force in a flaring active region, the authors report "the first observational evidence found in the evolution of any non-potential parameter of solar active regions", possibly the other kind of correlation. So there is work to do to reconcile the possible tension here.

[2] "Highlights of the Flare Build-up Study"

[4] "A Correlation in the Waiting-time Distributions of Solar Flares"

Retrieved from "http://sprg.ssl.berkeley.edu/~tohban/wiki/index.php/Flare_waiting_times_depend_on_their_magnitudes"
Category: Nugget
Facts about Flare waiting times depend on their magnitudesRDF feed