Kristian Birkeland (1867-1917) and Carl Størmer (1874-1957) were both active during the early years of the 20th century in Oslo, Norway. They each made fundamental contributions to our understanding of the geomagnetic field, the particles propagating within it, and the polar aurora. To place them in context, one should understand that at the time of their work many people assumed that the aurora somehow emanated from the Earth, rather fhan penetrating from space.

The geophysics they invented and explored has complicated analogs in the Sun, which is why we are writing this Nugget; the equivalent solar work is just beginning now as our observational facilities improve. At the time of writing, the Parker Solar Probe has already completed two deep perihelion passages in a first-ever penetration of the innermost heliosphere.

Birkeland [1] made several significant contributions in diverse fields, but we are remembering him here for the "Birkeland currents". These are specific field-aligned currents linking the ionosphere with the magnetosphere. The currents close across the magnetic field in the ionosphere, via Hall and Pedersen conductivities (the components of electrical conductivity not parallel to B), driven ultimately by a large potential drop across the magnetosphere induced by the solar-wind flow. Figure 1 illustrates how these currents work, in cartoon style.

Figure 1: Left, a cartoon of the Earth's Birkeland currents; right, an actual photograph from Birkeland's own experiments.

The solar analog of Birkeland currents remains to be discovered and understood, although there are persistent glimmers of interest (See Haerendel's Ref. [1], for example). The same mechanism, solar-wind flows on open fields external to coronal streamers, may not even have been suggested yet in the literature. The high conductivity of the solar corona suggests that voltages will be small, but the indirect observations of vertical currents in the photosphere show that the currents are large, measureable in TA (teraampere).

Birkeland famously displayed his current systems in experiments with terellas, as in the right panel of Figure 1. This is one of his own photographs, and he likened its spiral appearance to that seen in the spiral galaxies, of course not known at that time to be "island universes" of stars.

After a relatively short life of spectacular achievement, Birkeland died in bad health while in far-off Japan in 1917, separated from Norway by the war, among other things. His ashes were brought to Oslo's Western Cemetery, and interred in the plot shown in Figure 2 here. 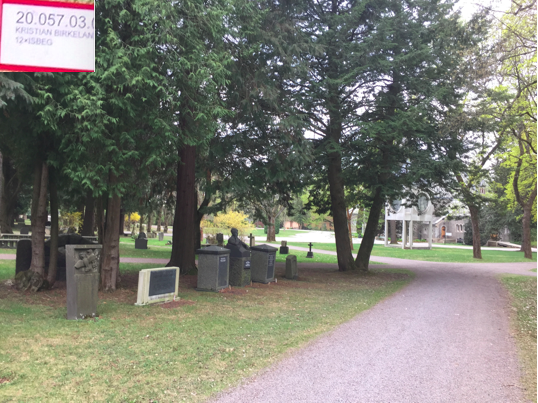 Figure 2: Birkeland's grave marker (the white oblong), with the inset showing its coordinates.

Very loosely translated, the marker says "He fixed air's nitrogen in an electric arc; he explored the northern lights and explained them as charged particles in the Earth's magnetic field."

It is timely to remember the Norwegian pioneers of space research, as we have done here with Kristian Birkeland. His scientific innovations, not really properly noted during his time, gain in weight with the years, and perhaps his geomagnetic current systems and terrella experiments have some signficance for solar phenomena.

[1] "Reconnection Mediated by Magnetic Fractures and the Solar Flare"