Loop-shaped structures are observed in the solar corona via UV and X-ray images. They appear as bright curved arches that can extend to a quite large fraction of the solar radius. They consist of hot and relatively dense plasma apparently confined by guiding magnetic flux tubes. Although progress has been made studying the physical properties of coronal loops, accurate knowledge of their heating mechanism still eludes us. It is commonly accepted that energy for coronal heating is stored in the magnetic field and released either via a magnetic-reconnection process (also thought of as "DC," direct current heating) or by the dissipation of waves ("AC," alternating current heating). Reconnection requires either the existence of mixed polarity fields at the loop footpoints or loops that are highly braided along their length. Until recently, neither condition was frequently observed in the solar atmosphere.

In this study [1] we focus our effort on the footpoints of two warm coronal loops well observed in SDO/AIA's 171 Â images. Both loops had one footpoint rooted either directly in (Loop II, 2015 Dec. 17) or nearby (Loop I, 2016 May 5) a sunspot. For each loop the other (the "remote") footpoint was located in an extended plage area within the active region. Our goal was to study the dynamics of the underlying magnetic field co-spatial with the loop footpoints and co-temporal with episodes of loop brightening and to determine their possible role in the causing these brightenings.

One of the known difficulties related to coronal loop studies is the spatial confusion with overlapping emission from other structures. The corona is normally optically thin at this wavelength, and so foregroud/background confusion is inevitable. Furthermore, insufficient spatial resolution often prevents the reliable identification of loop footpoints in the lower solar atmosphere, and this affects our understanind of the diagnostic observationss. It was therefore our objective to select isolated loops that could be reliably traced from one footpoint to another. 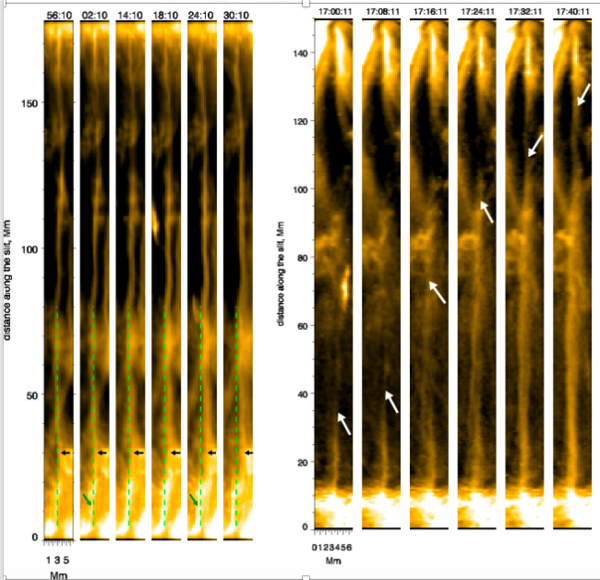 Figure 1: Dynamics of Loop I (left) and Loop II (right) as seen in AIA 171 Â data. The green vertical dashed lines mark the initial position of Loop I at the onset of the event, while the black arrows indicate the subsequent displacements of that leg. The white arrows plotted over Loop II indicate the moving front of the warm plasma that appeared to be injected at the remote (plage) footpoint of the loop located at position y = 7

Dynamics of Loop I

The Goode Solar Telescope (GST) observed in sharp detail the photosphere and chromosphere at the sunspot footpoint of Loop I (outlined by the ellipse in Figure 2). The footpoint was associated with negative polarity elements N1 and N4 as well as a positive polarity field P1 that emerged in a close proximity to the plage fields. Co-temporal GST Hα images did not show any distinct jetting that could be reliably linked to the flux emergence event.

Figure 2: Chromospheric Hα-0.8 and Hα+0.8 images (two left panels), photospheric TiO 7059 Â image, and [http://www.bbso.njit.edu NIRIS B} line-of-sight component of the magnetic field (right) in the vicinity of the AIA 171 Â sunspot loop footpoint, the location of which is outlined by the ellipse. N1 and N4 mark two negative polarity magnetic elements and the cospatial compact brightenings, while P1 marks a small positive polarity flux situated in the middle of a granule. The marks N2, N3, and Δ are plotted here to ease image comparison. The FOV of each panel is 17.4 x 17.4 Mm.

GST vector magnetograms (Figure 2) showed that N1 and P1 were initially magnetically connected with the transverse fields running along the P1-N1 line. However, by 17:30 UT the transverse fields connecting the N1-P1 pair weakened, while the P1-N4 connection strengthened, as evidenced by the transverse fields that now became oriented along the line connecting the elements. This suggests that we witnessed a flux cancellation process driven by emergence of small-scale fields at the borderline of mostly unipolar plage fields. Analysis of HMI magnetograms showed that the magnetic fields at the remote (plage) footpoint has intensified during the event although no opposite-polarity signatures were detected.

Loop II connected a plage region with an umbral region of the main leading sunspot in NOAA AR 12470, which was an ALMA campaign target [2]. Loop II is similar to Loop I in size and lifetime, however, its sunspot footpoint was rooted in the an uniform umbra without light bridges and it showed propagation of a dense plasma front from the remote footpoint toward the sunspot. The remote footpount was rooted at the center of the field of view, where according to HMI magnetograms, a small positive polarity element, outlined by a black contour in the 17:13:08 UT panel, gradually diminished. The data also showed very weak signatures of opposite polarity flux appearing next to the positive polarity element, suggesting that flux emergence and cancellation took place at the footpoint of the loop and thus possibly causing the observed plasma injection.

Figure 3: Evolution of the magnetic environment at the sunspot footpoint of the loop. The black arrow represents 2000 G transverse fields. The line-of-sight fields (background) are scaled between −200 G (red) and 200 G (blue). “N1,” “P1,” and “N4” mark positions of the magnetic elements under discussion. The extended AIA 171 Å sunspot loop footpoint occupied space between N1 and N4 (also see Figure 2).

In this study we focused on the magnetic environment at four footpoints of two coronal loops and concluded that magnetic flux emergence and cancellation have driven plasma and energy injection into the loops. Loop activation, plasma flows, and heating processes were driven by magnetic reconnection between a small-scale emerging flux and large-scale fields. In this type of configuration the large-scale field line jumps across a dipole, which may correspond to the the loop displacement clearly observed in the AIA 171 Â data. We also conclude that the sunspot-rooted bright loops may be caused not only by light-bridge and umbral dot activity (e.g., [3,4]) but also by the photospheric dynamics at the remote (non-sunspot) footpoint.

Finally, this (as well as earlier studies) emphasizes that on spatial scales below 2 Mm, the magnetic fields are still dynamic and complex. This may directly manifest itself in the solar corona through chromospheric and transition-region heating at the footpoint regions of coronal loops. Flares in quiet-Sun areas have recently been detected with NuSTAR hard X-rays [5], which once again emphasizes that the magnetic structures hidden below the resolution of modern instrumentation have to be taken into account when considering mechanisms of coronal heating.

[3] "Chromospheric Plasma Ejections in a Light Bridge of a Sunspot"