The solar chromosphere plays an essential role in the development of solar flares, and the Hα line historically led the way to much of what we now know about flare physics. Such an emission line can in principle have polarization, which could greatly extend its diagnostic potential.

The origin of the linear polarization in chromospheric lines during solar flares is not fully understood yet. Linear polarization found in flare ribbons, especially in Hα, has been investigated and reported by many authors as event studies.. A large-scale survey (Ref[1]) analyzed 30 flares observed with imaging and spectropolarimetry techniques in Hα using high-frequency modulation, and concluded that no flares show such significant linear polarization signals above 0.07%. This conflicted with earlier positive observational results, suggesting spurious polarization signals caused by seeing or by flaring structures evolving in time. To investigate the polarization during flares further, a high-speed polarization modulation is required to suppress spurious signals to as low a level as possible. Here we report new results (Ref. [2]), both statistical and event-based, of Hα linear polarization in flaring regions taken with a reasonably high-frequency modulation as well as with high temporal and spatial resolutions.

Our polarization measurements used ferroelectric liquid crystal polarimeter, which was installed in one of the tubes of the Solar Flare Telescope of the National Astronomical Observatory of Japan. The frequency of the polarization modulation in our observations was about 120 Hz, which greatly reduces the effects of seeing. The cadence of the polarization data was 1 s, at spatial sampling 2"/pixel. This instrument operated regularly between 2004 and 2005, with flares automatically detected on the basis of intensity increase at the Hα line center. As a result, 71 Hα flares, including 64 GOES events, were recorded between 2004 July and 2005 December. The GOES events include 4 X-class flares and 13 M-class flares. 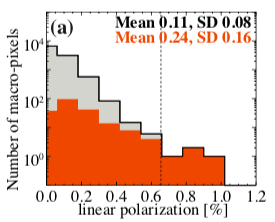 Figure 1: Histograms of degree of linear polarization. The gray histogram in each panel shows the data from all of the events, whereas the red histogram shows the data for the event SOL2005-12-02 (M6.5). The dotted line shows the sum of 1σ statistical and systematic errors, i.e. 0.65%. The average and the standard deviation (SD) of the data are marked in the figure.

We investigate more details of the event in which the strong polarization signals appear. The event was an M6.5 class flare occurring in NOAA 10826, located at S03E19. Just after the flare, strong coronal dimming appeared near the active region. Figure 2 shows Stokes IQUV images in Hα as well as images taken with other instruments at the hard X-ray peak time. Two bright sources appeared in the hard X-ray (50-100 keV) image at solar helioprojective coordinates (-300, -90) and (-290, -80), and they were connected by soft X-ray (12-25 keV) loop-like structures. The two hard X-ray sources are located in the opposite magnetic polarities seen in the photospheric line-of-sight magnetogram, and this fact suggests that the soft X-ray loops correspond to magnetic field lines connecting the two hard X-ray sources. The Hα intensity image shows the brightest source corresponding to the X-ray sources, and in addition, two other bright sources located at (-340, -87) and (-265, -70). They are in opposite magnetic polarities, and connected by a bright EUV loop seen in the 195Â image. Thus, we suggest that small arch structures connect two hard X-ray footpoints and that a loop over the arch structures lies approximately along the magnetic neutral line as shown in the cartoon in Figure 2 (lower right). Among the four Hα footpoints, strong Q/I and U/I polarization signals of ~1% appeared at (-340, -87), which we interpret as one of the footpoints of the EUV loop. The averaged degree of the linear polarization at the hard X-ray sources is less than 0.2% which is below the polarimetric error level. These facts suggest that neither hard X-ray, soft X-ray, nor Hα fluxes correlate with the Hα linear polarization.

Figure 1: Maps of SoHO/EIT 195 Â, SoHO/MDI continuum intensity and line-of-sight magnetic field, RHESSI 12-25 and 50-100 keV counts, Hα Stokes IQUV, and a cartoon of the coronal magnetic structure drawn in the same field of view. In the cartoon, the green dashed line is a coronal loop, and the blue thick lines are small arch structures that connect hard X-ray footpoints. The contours show the Hα intensity observed at 02:49:30 UT at the levels of 2x and 3x quiet-Sun brightness. The light-blue arrow in the EIT image shows the average direction of the linear polarization in the Eastern Hα ribbon during the flare.