Localized Microwave and EUV Bright Structures in an Eruptive Prominence

A solar filament (also called a prominence) is an intrusion of "cool" chromospheric material in the "hot" corona, maintaining itself somehow due to its magnetic-field structure. Here "cool" and "hot" mean "hot, about 10,000 K" and "hotter, about 1 MK". This kind of structure is prone to eruption, although this action is not easily predictable; in extreme cases a filament eruption can lead to a powerful solar flare and a coronal mass ejection.

We have studied a solar eruptive prominence with both flare and CME via microwave and EUV observations. Its evolution can be divided into three phases: slow rise, fast expansion, and ejection. In the slow-rise phase, the prominence continuously twists for more than one hour with a patch of bright emission appearing around the top. When the north leg interacts with local smaller magnetic loops, a fast expansion begins and the flare takes place at that location. The prominence grows rapidly, and a series of localized brightenings appear in the whole prominence structure. Then the ejection occurs, followed by a CME. The pattern of brightenings as viewed at these wavelengths allows us to learn a bit more about the mechanisms involved.

Our microwave images (at 17 and 34 GHz, mainly showing bremsstrahlung from ionized hydrogen), can be divided into three components. In the microwave range we measure brightness as "brightness temperature" Tb, which is closely related to the physical temperature and to the geometry of the source. Here the strongest emission Tb 25,000-300,000 K, is related to the bright flare region near the north foot. The medium values of Tb (10,000-20,000 K) outline a series of small-scale bright enhancements scattered along the prominence, and superposed on a weak background with Tb = 5000-10,000 K (Figure 1). These localized bright structures, first appearing at the top and then scattering in the entire prominence structure, are cospatial with EUV bright threads, fibers, or spots in both high- and low-temperature passbands (Figure 2). 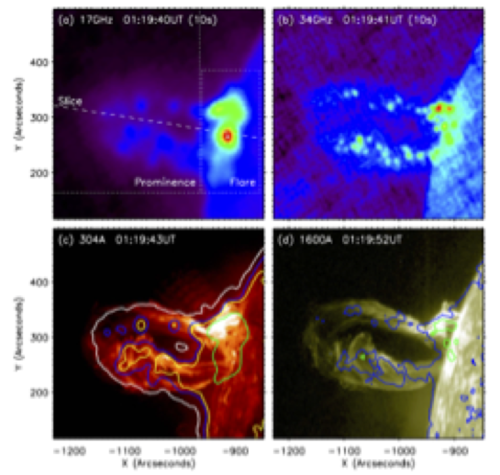 By studying the evolution of two bright regions in the prominence, we find significant time variations on the scale of 3-5 s in the microwave observations (Figure 3). Thus the plasma inside the prominence must have complex spatial structure that changes with time in both density and temperature. These small-scale bright structures indicate intermittent changes in these component plasma structures within the prominence. The amplitude of the enhancements is comparable to the smooth background, so they are significant elements of the overall prominence. 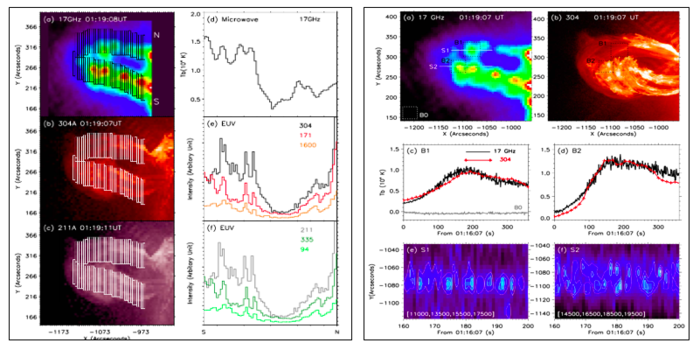 [2] "Reconnection of a Kinking Flux Rope Triggering the Ejection of a Microwave and Hard X-ray Source I. Observations and Interpretation"