Free energy can build up in the magnetic field of a stellar atmosphere, driven by wave energy (not photons) transported outward through the photosphere. Such a flux (on the Sun, at least), is only a small fraction of the solar luminosity in the form of photons.

The energy release and build-up processes of this energy in the solar corona can have significant implications in particular for the case of large recurrent flares in same active region (AR), which pose challenging questions about the conditions that lead to the episodic energy release processes. It is not yet clear whether these events occur due to the continuous supply of free magnetic energy to the solar corona or because not all of the available free magnetic energy is released during a single major flaring event. In order to address this question, we report on the evolution of photospheric magnetic field and the associated Lorentz force changes in NOAA ARs 11261 and 11283, each of which gave rise to recurrent eruptive M- and X-class flares. 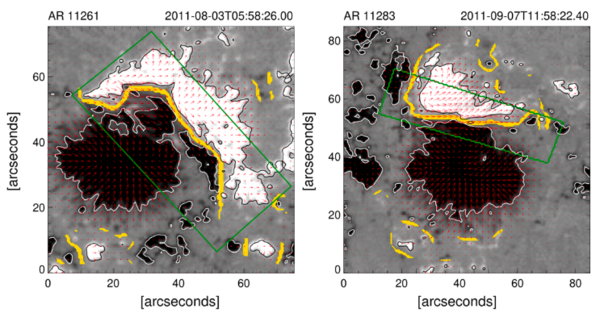 Figure 1: An HMI vector magnetogram of AR 11261 (left panel) and AR 11283 (right panel). The radial component (Br) of the magnetic field is shown in gray scale and the horizontal component (Bh) by red arrows, with saturation values 500 G. The white/black solid line contours the region of negative/positive polarity of Br having a magnitude greater than 500 G. The green rectangular boundary encloses the selected region within which all the calculations have been done. The yellow lines mark the polarity inversion line.

After the abrupt downward changes during each flare, the net Lorentz force increases by (2-5)x1022 dyne in between the successive flares (see Figure 2). This distinct rebuilding of the net Lorentz force suggests that new energy was supplied to the ARs in order to produce the recurrent large flares. The rebuild-up of magnetic free energy of the ARs is further confirmed by the observations of continuous shearing motion of moving magnetic features of opposite polarities near the polarity inversion line (see Figure 3). 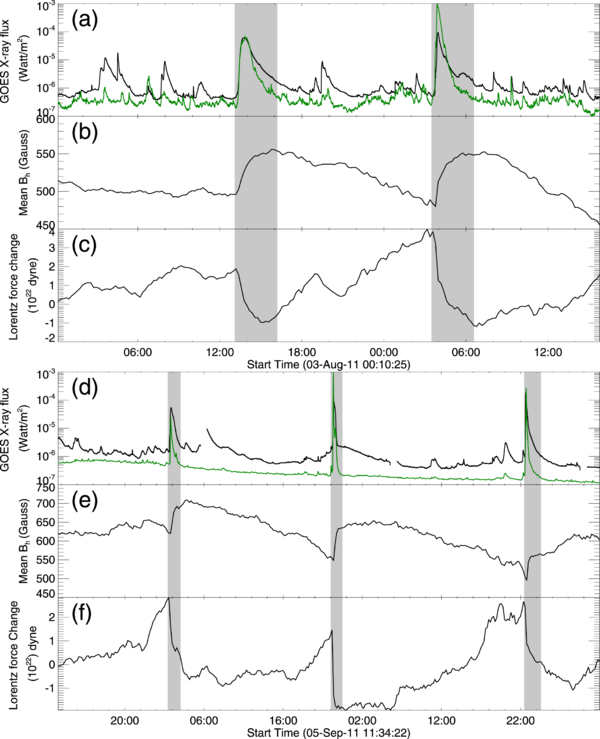 Figure 2: Temporal profile of the GOES 1-8 Â X-ray flux during the recurrent flares that occurred in AR 11261 (a) and AR 11283 (d). The solid green curves denote the temporal evolution of the brightening calculated within the field of view of the AR in the AIA 1600 Â channel. Evolution of the horizontal magnetic field ((b) and (e)) and changes in the radial component of the Lorentz force ((c) and (f)) within the selected regions (shown by rectangular boxes in Figure 1) of AR 11261 and AR 11283, respectively. 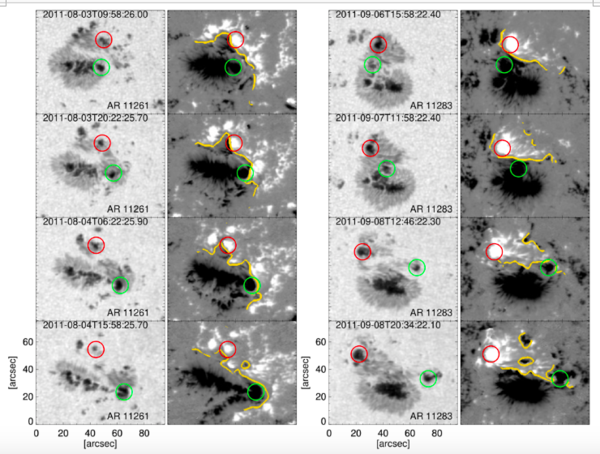 Figure 3: HMI continuum images of the flare productive part of AR 11261 (first column) and AR 11283 (third column). The different panels of each column show the temporal evolution of the sunspot group during the recurrent flares. The radial component of the HMI vector magnetic field of AR 11261 (second column) and AR 11283 (fourth column) within the same field of view as shown in the first and third columns respectively. Continuum images in each row of the first/third columns are cotemporal with the magnetic field maps shown in the same row of second/fourth column. The red and green circles depict the two prominent moving magnetic features of opposite polarities which show continuous antiparallel motion along the polarity inversion line denoted by the yellow solid lines.

We also have found a correlation between the CME momentum and the associated change in the net Lorentz force. This scenario is consistent with the flare-related momentum balance condition, where a Lorentz-force impulse would need to match the associated CME momentum (Ref. [1]). It is noteworthy that the flare-associated momentum conservation is not only related to the bodily transfer of mass in the form of CMEs, but also includes the effects related to explosive chromospheric evaporation (Ref. [2]). However, the correlation between the Lorentz force impulse and the CME momentum in the large recurrent eruptive flares reported in our study is valid as the effects of impulsive chromospheric evaporation are at least an order of magnitude smaller.

The distinct rebuild-up of net Lorentz force in between the successive flares and its abrupt downward changes during each flare obtained in our study, are the first observational evidence found in the evolution of any nonpotential parameter of solar ARs, that confirms the build-up and release scenario for magnetic energy storage in the solar corona. We conclude that the recurrent large flares studied in this work occurred due to the newly supplied energy to the AR, instead of consuming the available residual energy. Our finding of energy build-up phase leading to a subsequent flare in the AR may be similar to the energy build-up phase prior to the occurrence of a flare as reported in Ref. [3] (see also the previous Nugget), which suggests that the flare event could start when the magnetic energy storage of the AR reaches a fixed or slowly-varying saturation level. More studies on the evolution of ARs leading to recurrent flares will be helpful in establishing this scenario.

In context of space weather predictions, the evolutionary pattern of the net Lorentz force changes reported in this study has significant implications, in particular, for the forecasting of recurrent large eruptive flares from the same AR and hence the chances of interaction between the associated CMEs.

More details of this work can be found in Ref. [4].

[1] "Global Forces in Eruptive Solar Flares: The Lorentz Force Acting on the Solar Atmosphere and the Solar Interior"

[3] "A Correlation in the Waiting-time Distributions of Solar Flares"