Coronal mass ejections (CMEs) are powerful drivers of plasma shock waves that can accelerate particles up to relativistic speeds. These accelerated particles can produce bursts of radiation at radio wavelengths through the plasma emission mechanism. The most obvious manifestations of shocks at radio wavelengths on the Sun are Type II radio bursts observed at low radio frequencies. Sometimes, bursty signatures of individual electron beams are also observed in dynamic spectra accompanying Type II bursts or occurring on their own. These fine-structured electron beam signatures are called "herringbones" because of their appearance in a spectrogram. However the relation between herringbones and CMEs is still not well understood, partly due to previous limitations of low radio frequency imaging.

In this study, we report unique observations with the Low Frequency Array (LOFAR) of the GOES X8.2-class flare SOL2017-09-10 and its associated fast CME (~3000 km/s). As the CME expanded through the corona, we identified the location of a multitude of herringbone sources at frequencies between 30 to 60 MHz. We showed that these herringbones represent individual electron beams accelerated by a shock at multiple locations along the expanding CME flanks (Ref. [1]).

In September 2017, the active region NOAA 12673 was the source of the largest solar flares in Solar Cycle 24, including an X8.2-class flare on 10 September 2017 associated with one of the fastest CMEs ever observed: ~3000 km/s (Figure 1a-b). The CME was the driver of a powerful shock (Figure 1b) that was associated with intense radio emission at meter wavelengths observed with I-LOFAR (in Ireland) and the LOFAR core. This emission consisted of a multitude of herringbones that occurred on their own and also as part of the lanes of emission of a Type II radio burst (Figure 1c-d). 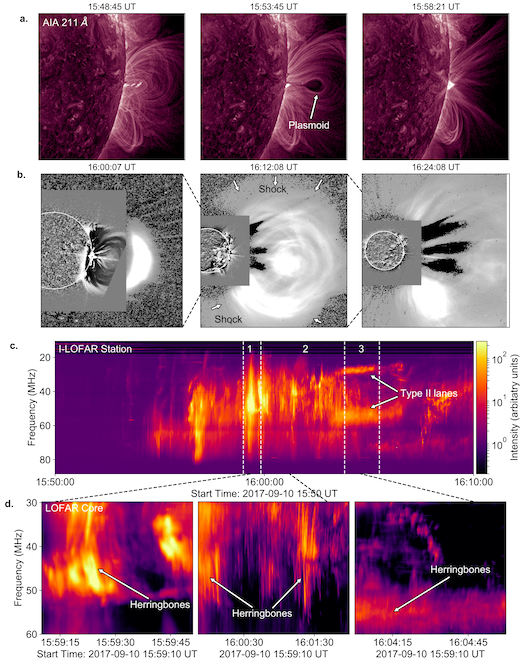 Figure 1: The CME and associated radio emission from SOL2017-09-10 (X8.2). (a) The evolution of the plasmoid eruption in the low corona that accompanied the 10 September 2017 flare observed in AIA 211 Â images. (b) Difference images from SUVI and LASCO showing the expansion of the CME in the high corona. The white arrows denote the CME shock. (c) I-LOFAR dynamic spectrum showing the radio signatures that accompanied the flare. (d) High-resolution LOFAR core dynamic spectra showing herringbones.

LOFAR core observations were taken in the "tied-array beams" mode (Ref. [2]) that allowed imaging of the observed herringbones at multiple frequencies. The LOFAR images show that individual herringbones are located on the southern CME flank (Figure 2a-b), while the herringbones inside the Type II lanes are located on the northern CME flank (for more details on the herringbone bursts and CME propagation, see the accompanying movie in Ref. [1]). The herringbones are therefore located at the CME flanks, in areas of low Alfvén speed (<300 km/s), where the CME is likely to drive a shock. These are regions of open magnetic field (Figure 2c). In Figure 2, the herringbones with forward drift are moving away from the Sun and the herringbones with reverse drift are moving towards the Sun, in both cases along open magnetic fields encountered by the CME. This is due to the plasma emission mechanism where the frequency of emission is directly proportional with the square root of the electron density, which decreases with distance from the solar surface. 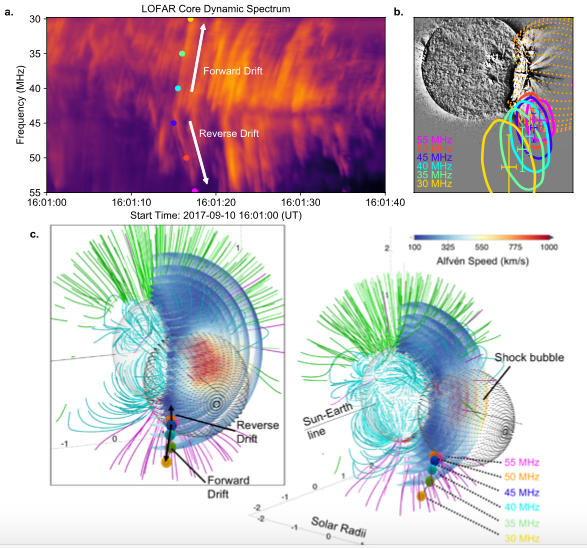 Figure 2: The location of an individual herringbone observed with LOFAR in 2D and 3D relative to the CME bubble. (a) Dynamic spectrum of herringbones, where an individual herringbone is selected with forward and reverse drift components. (b) 70% contours at six frequencies of the herringbone source location in (a) overlaid on the SUVI running difference image of the CME. The 3D shock bubble surrounding the CME is represented by orange dots. (c) Model of the location of Alfv&\eacute;n-speed surfaces in 3D space relative to the CME shock bubble (black dots), open magnetic field lines (purple and green lines) and the location of the de-projected radio source centroids in (b) at six frequencies. The herringbone sources are located on top of the shock bubble in areas of low Alfv&\eacute;n speed (<300 km/s) and open field lines.

This study confirms that herringbone radio bursts are signatures of individual electron beams accelerated at the CME-shock front. Radio imaging shows that these electron beams travel in the same direction as the expanding CME. The particle acceleration locations are also coincident with regions of Alfvén speed minima, where CMEs are most likely to drive shocks in the corona. In our observations, one of the fastest CMEs ever observed was the driver of a powerful low coronal plasma shock (Mach 2.9) that accelerated near-relativistic electron beams generating herringbone radio bursts at multiple locations on the expanding CME front. The multitude of electron beam signatures observed at radio wavelengths suggests that particles easily escaped the shock front, most likely due to the presence of open magnetic field lines encountered by the CME.